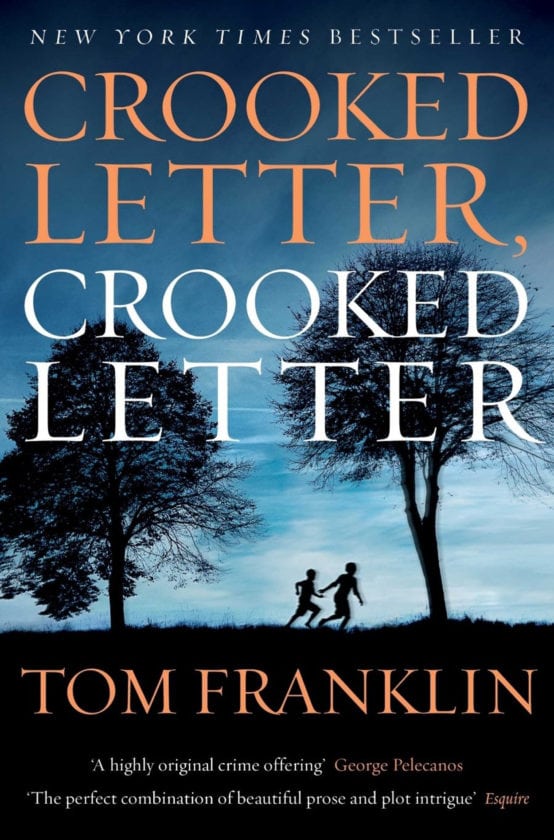 “Crooked Letter, Crooked Letter” is both a superb crime thriller and a textured literary drama driven by character and theme.

In fact, author Tom Franklin handles each of these aspects so well that it’s tough to know which one to emphasize.

Winner of the Willie Morris Award for Southern Fiction, the Los Angeles Times Book Prize and U.K. Crime Writers’ Gold Dagger Award, Franklin’s 2010 novel is currently one of two books I recommend when anyone asks for a reading suggestion (the other is Abraham Verghese’s “Cutting for Stone”).

“Crooked Letter” focuses on two Mississippi men: white mechanic Larry Ott and black constable Silas Jones, who were unlikely pals as kids in the 1970s. But that friendship ended somewhat abruptly, partly due to race and partly to their parents; the estrangement, however, was later cemented after a tragic, creepy and baffling incident in which a local girl disappeared after a date with Larry.

Though no body was found, the entire town believes “Scary Larry” did her in, and the Otts’ life — social, professional and familial — was swiftly smothered in a miasma of small-town gossip and prejudice.

Now it’s 25 years later, and another girl has disappeared, with Silas doing the investigating and middle-aged Larry — who hasn’t a friend in the world — again languishing under suspicion. The kicker: Any reader can see that Larry isn’t the sort of person to do such a thing — but no one else knows this.

As with any good crime thriller, there’s more going on here than meets the eye; but I will say only that Franklin deftly juggles past and present, while also shifting smoothly from Larry’s point of view to Silas’s — which essentially gives the novel four storylines. It’s a gripping read, at times impossible to put down.

Yet that’s only part of its success. Franklin’s other triumph is a keen examination of race, friendship, guilt and loneliness. The lengths a man will go to for human connection — and the constant question of how much responsibility we bear for past mistakes and sins (especially ostracizing loners like Larry) — is devastating and challenging. The author pulls no punches — yet his conclusion offers hope and closure, despite many lingering unanswered questions.

Franklin is a terrific writer, with a strong sense of his southern Gothic setting and a mastery of simile and symbol (watch especially for mail and snakes).

The books takes its title from a grade-school chant teaching kids how to spell “Mississippi.” “S” is the crooked letter, of course — so the repetition points to parallels between Silas and Scary Larry (both start with S), while also playing on the slang meaning of “crook,” the mail motif (“letter”) and the serpentine shape of the novel’s frequent snakes.

Nearly every aspect of “Crooked Letter” is that multifaceted, and it holds up well under repeated readings; I should know — I read it thrice in 14 months.

And now that I’ve hashed it out with my book group, I just might have to read it again.