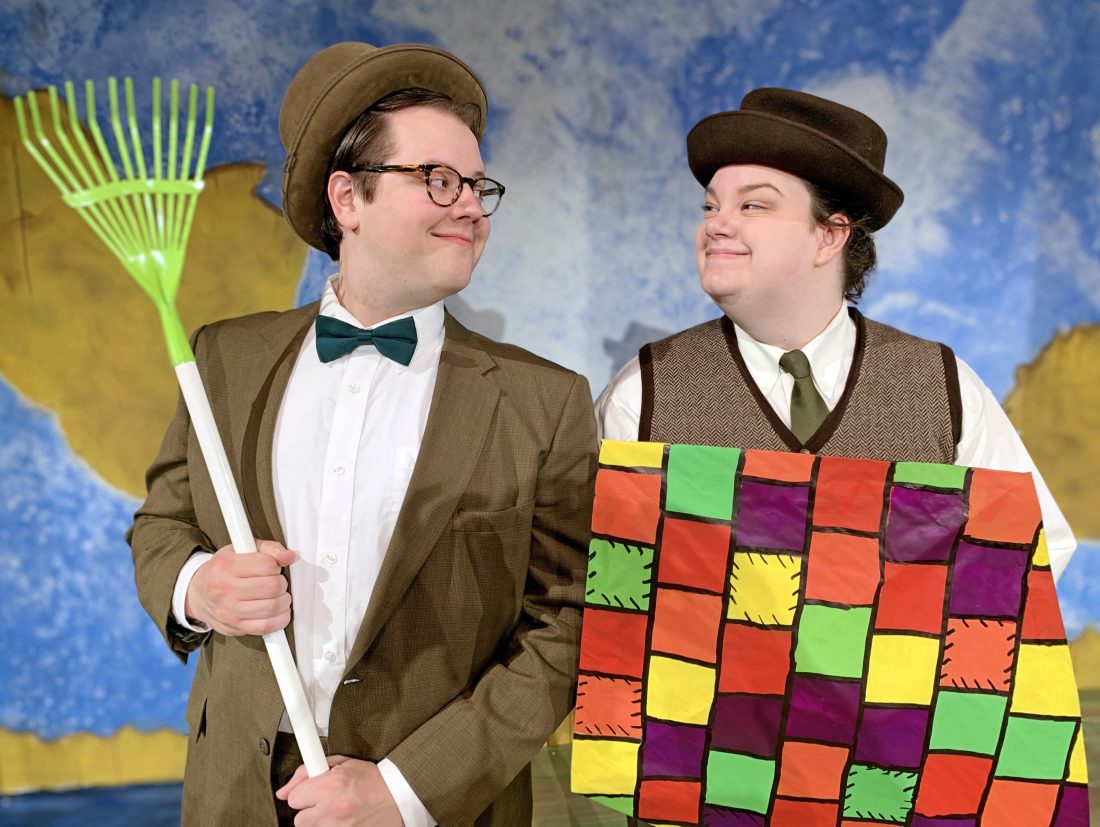 MILL HALL — Although it’s not easy being green, at least a frog who can talk, hop, sing and dance can still be highly entertaining.

Millbrook’s Producing Artistic Director David Leinholdt and its board of directors are readying the old barn theater for what promises to be another ambitious season.

Although neither the Main Stage nor the Cabaret has a traditional curtain, the acclaimed professional playhouse is ready to “raise the curtain” on the upcoming 56th season of summer attractions.

“A Year With Frog and Toad” is the whimsical tale that leaps from the page onto Millbrook’s Main Stage to kick off its 2019 season.

With a simple premise that a true friend will always be there to reassure and look out for the other fellow’s best interest, the Main Stage is transformed into a colorful land, upsized to resemble a frog’s eye-view of the world around him and his aquatic buddies.

The musical takes off after a long sleep of hibernation, and with a bit of soft-shoed vaudeville and lots of charm. It follows the woodland adventures of two close friends — a good-natured cheerful frog, and an often grumpy, anxiety-ridden toad.

“(This is) an underrated show and was nominated for a Tony Award, featuring one of the best scores of the season”, said Leidholdt.

“The message of friendship is ageless, and one that is needed in our society right now. It is charming, funny, and I think that parents will love it too,” said Leidholdt.

Based upon the events and characters in a series of beloved children’s books by Arnold Lobel, the show’s often catchy lyrics are by Willie Reale, with music by Robert Reale. Audiences can’t help but chuckle at “Getta Loada Toad” and applaud the many tunes, including “Raking Leaves” and “Cookies”.

With notable off-Broadway, regional and university credits, Neal Kowalsky makes his Millbrook directing debut in this “exuberant and enchanting musical,” which depicts what happens during four fun-filled seasons. Hailing from New York City, Kowalsky works professionally as a director, assistant director, and photographer.

Professional and community theatre veteran Jacquie Engel serves as music director of this show that has a jazzy score, with a country-and-western thread woven around some catchy lyrics.

“The show is definitely family friendly but it’s not fluff,” Engel says. “The cast is doing well with the challenging music, and the story of friendship and fun will delight everyone.”

Heading the five person cast are Scott Duall as the perky Frog, and Margaret Warrington as the worrywart Toad.

Others in the cast, who play multiple roles, include Leron Wellington, Georgia VanRy and area favorite Aubrey Potash.

Potash describes “A Year with Frog and Toad” as “an endearing story on the importance of friendship.”

“Audiences will definitely be able to discern the vaudeville influences in the show and its music. And I bet many theatergoers will have a smile on their face, and a catchy song or two in their head after attending a performance,” added Potash.

The two amphibious friends meet some whimsical, woodland creatures, develop a deep relationship, and learn valuable life lessons, while rejoicing and celebrating the similarities and differences that make them so unique and special.

With a running time of an hour-and-a-half (with one intermission), “A Year With Frog and Toad” may seem a bit short for some adult theatergoers, but this bright musical flows along at probably just the right pace to entertain the younger, wide-eyed members of the audience.