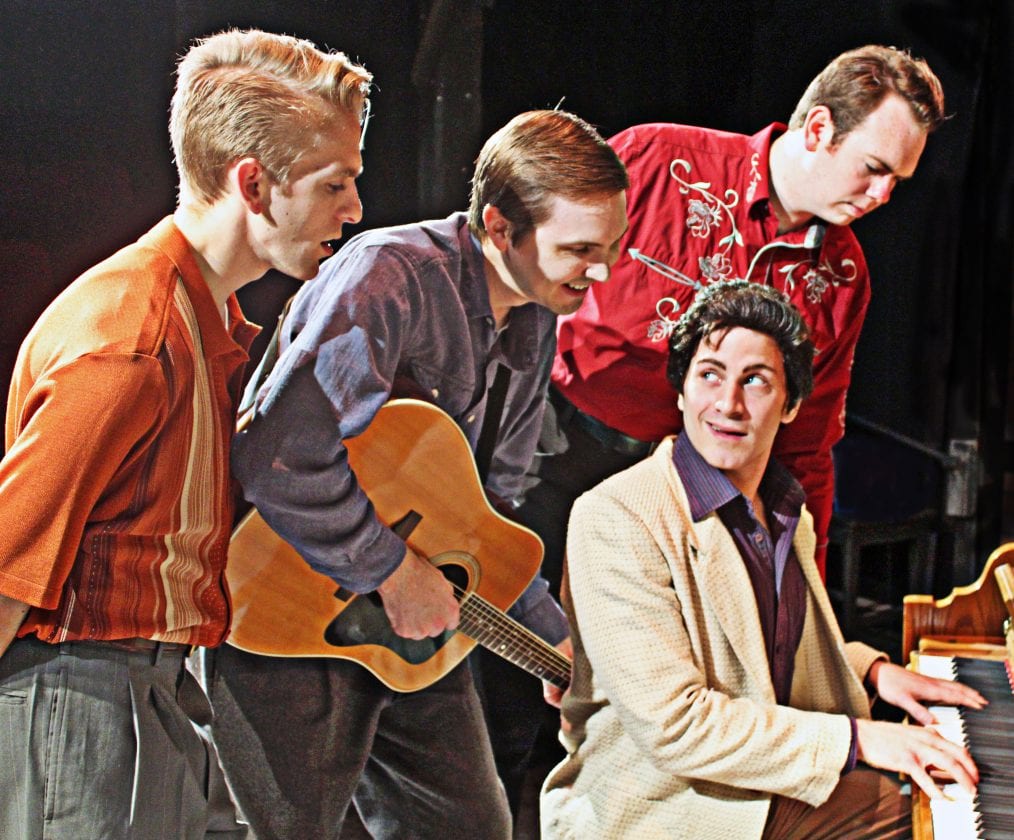 MILL HALL – Although their meeting was a real-life twist of fate, there’s no denying that this quartet’s music really sounds authentic.

Accompanied by a girlfriend, Elvis Presley stops by, as does Johnny Cash, who talks to recording impresario Sam Phillips. But soon, the quartet starts a legendary jam session.

Playing over three weekends as Millbrook’s final Main Stage attraction, “Million Dollar Quartet” is both directed and music directed by Jason Cohen, who is an alum of six productions of this rousing musical.

“It delights us to have this multi-talented director join our Millbrook Band this summer,” said David Leidholdt, Millbrook’s producing artistic director.

The show is 100 percent live with everyone on stage playing their instruments during the fast-moving session.

The storyline is a bit thin, but the list of tunes that are sung — or in many cases belted out — at this legendary recording session will keep Millbrook audiences not only content, but highly entertained.

The first and only collaboration inside a recording studio between these truly popular iconoclasts is loaded with songs that will make audiences hoot, holler, and heartily applaud. And all this great singing and storytelling happens before the audience-pleasing encore.

Taking center stage is Stephen Makropoulos as “The King.” Some of the tunes that Elvis sings in his inimitable way: “Memories Are Made of This,” “Long Tall Sally,” “Hound Dog,” and “That’s All Right.”

Alex Hamel plays the acknowledged star Carl Perkins, whose tunes include: “Who Do You Love?,” “My Babe,” and “See You Later, Alligator.” His younger brother Jay is played by Kroy Presley.

Sean Casey Flanagan plays “The Man In Black,” Johnny Cash, who offers his own singing style with “Folsom Prison Blues,” “Sixteen Tons,” “I Walk the Line,” and “Riders In the Sky.”

Elvis’ girlfriend Dyanne is played by area performer Brandy Aguirre. On her way to visit Mama Presley, Aguirre’s character Dyanne finds time to nicely vocalize “Fever” and “I Hear You Knockin’,” and sings backup vocals on a few songs.

The entire company joins in with the opener “Blue Suede Shoes,” and later join forces for “Brown Eyed Handsome Man,” “Down By the Riverside,” “Party,” and “Peace in the Valley.”

A legendary night comes to life with “an irresistible tale of broken promises, secrets, betrayals, and celebrations.”

Plaudits to Leidholdt for the likely difficult task of auditioning and then casting these talented performers who comprise the fabulous foursome. With the recording studio recreated on the intimate stage, the small cast excels; not so much by trying to impersonate the pop stars, but by zestfully recreating the sounds and rhythm of their music.

The show highlights the obvious chemistry among the four music giants, and their interactions with the producer, who helped propel their popularity into their million best sellers.

With one intermission, Millbrook’s “Million Dollar Quartet” is rated PG and is definitely a buoyant jukebox musical.

Entertainment-wise, this show rates an extra plus, as all attendees will feel involved in the singing and action on the stage near to them. Millbrook delivers on its promise that “Million Dollar Quartet” is fun to watch and even more fun to listen to!