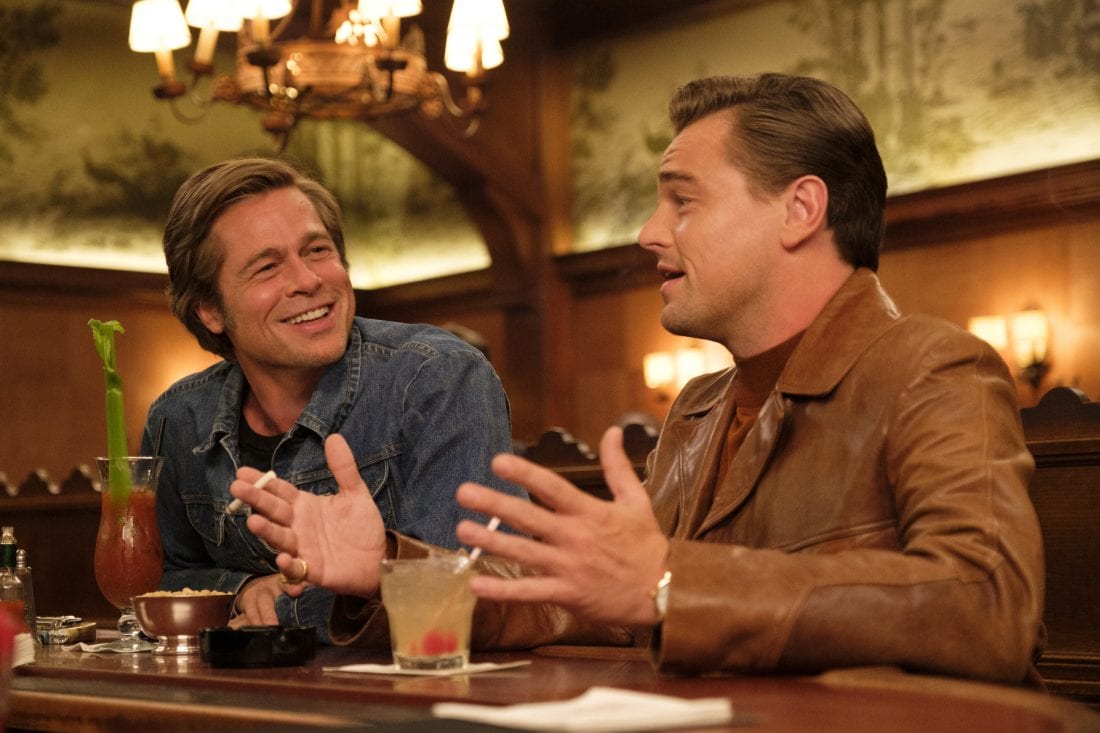 This image released by Sony Pictures shows Brad Pitt, left, and Leonardo DiCaprio in Quentin Tarantino's "Once Upon a Time in Hollywood." (Andrew Cooper/Sony-Columbia Pictures via AP)

While borrowing influences from Sergio Leone’s western classic, “Once Upon a Time in the West,” Quentin Tarantino’s ninth film, “Once Upon a Time in Hollywood,” is very much its own film. With this being the filmmaker’s penultimate endeavor, it stands almost as tall as his other masterpieces.

Once has-been tv-show superstar, Rick Dalton (Leonardo DiCaprio), strives to uphold his relevance in an everchanging 1969 Hollywood. Along with his burly stunt double/chauffeur, Cliff Booth (Brad Pitt), and upcoming-actress beauty, Sharon Tate (Margot Robbie), the film follows their three paths and how they all collide with the looming Manson Gang nearby.

The repeated success of Tarantino films and the name he has earned for himself is no fluke. The quality and care he puts into each and every one of his scripts sets the groundwork for fantastic film after fantastic film; this movie being no exception.

Tarantino’s signature unorthodox plot structure is displayed once again, but this time it takes an alternative approach; there is the main storyline, and then there is an extra tidbit at the end that feels necessary yet somewhat forced. It is this section that makes it a Tarantino film — something that many adore about the auteur. I think it is safe to say that this will be the favorite part of almost everyone who sees the movie. It’s that good.

There is a lot less action in this film, making it more of a character-driven piece. With the likes of DiCaprio and Pitt, it makes for enjoyable characters to watch.

Rick Dalton is a believable actor with all the insecurities that make his desperation for relevance appear real. The time dedicated to learning about his past makes him easy to care for. DiCaprio elevates any role he takes by giving it his all.

Just as talented as a performance (if not more), is Pitt. Essentially, he plays a version of himself: the cool, tough-guy demeanor that we have seen many times before. This time he steals the show. Pitt’s suave nature paired with his equally interesting role as a stunt double has garnered much attention for his acting skill.

While these two were used to their full potential, both in emotion and comedy, a real waste of talent was Margot Robbie. Sharon Tate was a very poorly written character that only dragged the film. Surprisingly, considering the story at hand and what we all know what happened to the young actress, she had little importance.

The title is quite fitting, as it feels like the audience was transported directly into the fantasy like setting during the end of the ’60s in Hollywood. The production design was scrutinized to every detail, making the film feel as real as possible. Hollywood Boulevard was shut down and transformed just so Tarantino could shoot. Inspiration for the environment all came from the golden age of cinema when he was a child. As a result, much of this film is based on his memories.

The picture is authentic as could be, with countless references to decade old classic films and TV shows to create a fully engrossing experience. Sometimes it does become a little too much that will leave the vast majority of audiences scratching their heads over many moments. Many will see it as being pretentious, which is a valid argument as the film was made for older cinephiles, a niche crowd.

This is perhaps Tarantino’s most thoughtful piece. As groovy as entertaining, “Once Upon a Time in Hollywood,” is the film that allows the acclaimed director to flex his cinema knowledge in a way that hopefully reaches audiences through the screen. But don’t forget, this is a film made for Tarantino, not for you — it shows that a baker can make their cake and eat it too.