North Central Sight Services has grown exponentially since 1957 employing and helping the visually impaired and blind. Though the organization has expanded from manufacturing rubber door mats from recycled tires and caning chairs to filling military contracts and shredding information with high levels of security the mission of NCSS has remained true. And the new President/CEO Brian Patchett, who has been visually impaired since age 7, hopes to change the way the world is for people with visual disabilities.

“Roughly 70 percent of people who are blind or visually impaired are unemployed in the United States,” Patchett said. “That makes us, as a group, one of the least employed in the country. So my vision is to help with that in the area of job development, helping people get free and public education in schools and connecting with other great partners around the area. My previous experience included lobbying and interacting with government and I plan to become a lot more involved with Harrisburg and nationally. I think we can double, even triple the size of the organization in the next three to five years.”

Patchett joined NCSS in April and stepped in as president this month filling the position previously held by Robert Garrett who retired. Patchett recently was CEO of Easter Seals Nevada for the last 15 years. He and his wife, Stacey, have six children and live in Montoursville.

He started working toward his goal of helping those with visual disabilities become more independent on April 15, and for the last three months Patchett had a chance to “get to know folks and be part of the community.” This included participating in the Golf for Sight tournament at Wynding Brook Golf Club, Milton, one of the agency’s biggest fundraisers, which grossed about $60,000 this spring.

“My goal is to help people acquire technology to help them be independent,” Patchett said. “Technology has changed my life. The iphone for example with voice over gives me full accessibility to almost anything. There is also Uber to get around town. There are two things that are very challenging to the visually impaired and that is access to information and travel. We have the ability now to help people overcome these obstacles.”

Items to help the visually disabled in the home or workplace are available in the low vision store.

Patchett uses CCTV which magnifies the words from a page onto a screen. Other helpful products include lighted magnifiers, which add up to one power of magnification just by lighting and a push button which voices the time, date and day. One of the top items is a 20/20 pen, which writes like a sharpie but doesn’t bleed through and is only $1.50.

“People are over the moon thrilled with the pen,” Tracy Haas, programs and services director, explained. “There is BumpDots for tactile touch on remotes and the microwave, heavy lined paper, a hand held digital magnifier, software for computers and much more. It’s a personal journey for people and it’s whatever works for each person.” The store is located inside NCSS at 2121 Reach Road.

NCSS utilizes a fleet of vehicles to provide transportation. “There are lots of rural areas where there isn’t uber and people can’t get around,” Patchett explained. “We receive referrals from eye doctors on patients who have trouble getting to appointments or to the grocery store.”

NCSS helps the visually impaired with employment. No longer making rubber mats due to the cost of rubber the employees of NCSS keep expanding the area in which they provide shredding services. “We can pick it up on a regular basis in our area and= eight surrounding counties and bring it here to a secure area and shred it,” Patchett explained. “We can destroy whole laptops and hard drives with a high level of security so people know it’s not going to go anywhere else.” They also provide document storage. Drop-off hours are 8 a.m. to 5:30 p.m. Monday through Friday.

For the Department of Defense with support from the AbilityOne program, the NCSS employees package hard drives and targets for the military. According to Suellen Porter, customer service/purchasing agent, most orders are sent to New Cumberland to a large depot where the items are shipped overseas. The AbilityOne program provides employment opportunities for more than 47,000 Americans who are blind or have severe disabilities.

“The AbilityOne services are a large part of what we do here but we are always looking for things we can produce,” Patchett said.

In another area of the warehouse, employees sort plastics for recycle. “Ever since cassette tapes have been around there were millions of books on tape,” Patchett said. “Over the last couple of years, since books are now available online, we receive huge bins of the green plastic containers that held the cassettes. We sort them and a machine breaks them down for recycle.” Another program is the Sip for Sight drinking water service. A commercial grade water cooler can be delivered locally and maintenance and filter changes are included. NCSS provides vending machines to area businesses and they can be found at rest stops along Interstate 80, according to Katie Coffey, marketing and quality manager.

“We provided screenings for over 5,000 people yearly,” Coffey said. “Kindergarten registration is a very busy time in schools. The device she uses takes seconds to screen someone.”

Patchett loves the community here and has met people in his neighborhood and church. “I’m looking forward to the seasons because in Las Vegas there’s a little bit of winter and a lot of summer,” Patchett said. “My wife and I love to look out our back door into the woods. She said she doesn’t ever want to leave.” 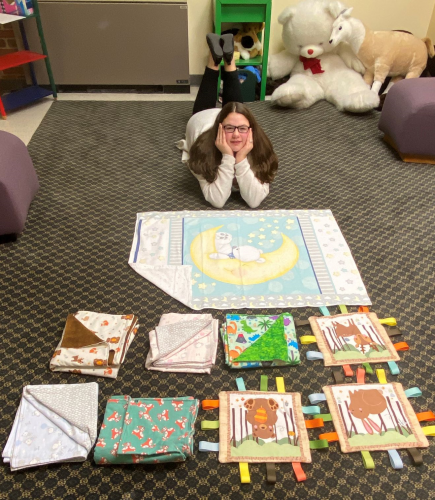