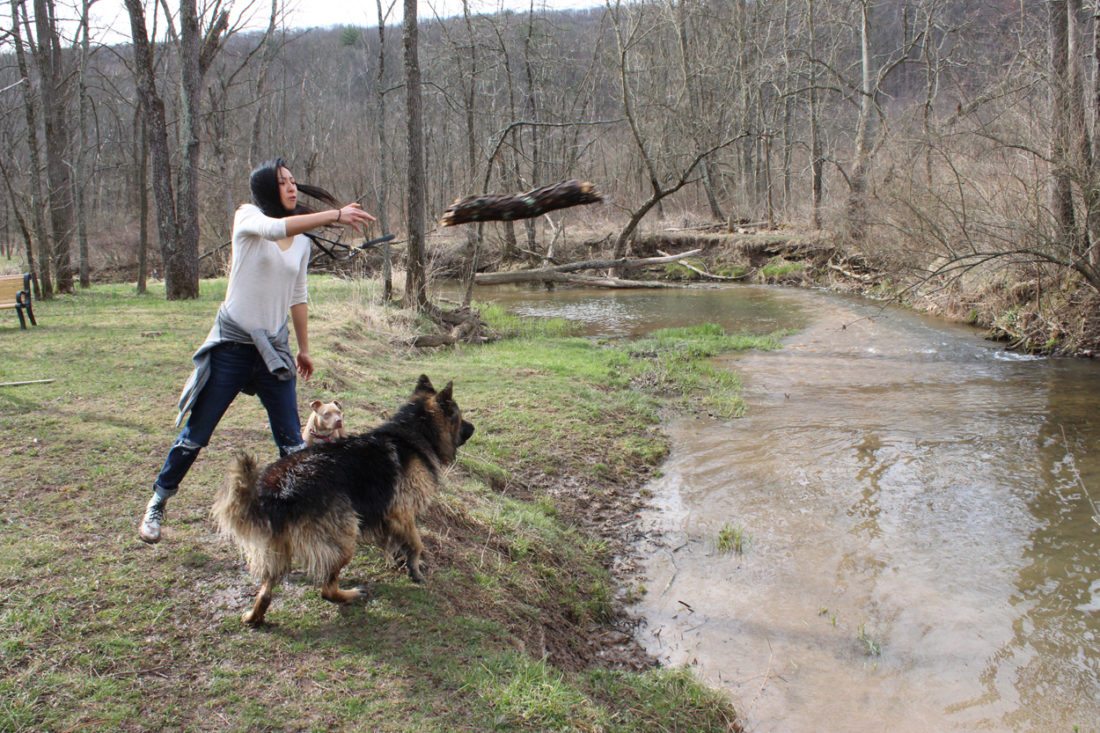 CARA MORNINGSTAR/Sun-Gazette Lucy Chen, community member, throws sticks for the dogs taking a break by playing in the water with the dog walking group at Turtle Creek Dog Park in Lewisburg recently. Community members are upset that the 78 acre property, which is currently an open park where dogs may go without leashes, may be sold to be used as a church property.

LEWISBURG — Many who enjoy using the 78-acre Turtle Creek Dog Park to let their dogs roam off leash on nature trails may have to find somewhere else to go as the property is scheduled to be sold.

The community believes the intention of the buyers is to build a church on the property, but the actual plans are unknown.

The Rev. Rubens Ruba, of Lewisburg Alliance Church, declined to comment for this story.

East Buffalo Township, where the park is located at the corner of Furnace and Supplee Mill roads, is an area lacking parks, according to Char Gray, township supervisor.

“There was a recent Union County study and … one of the findings is if you look at parks per capita, East Buffalo Township and the Union County area is deficient in parks as compared to other places around Pennsylvania,” she said.

The Turtle Creek Park Association was formed in 2016 to help keep the park going.

“They (Hallowing Run) decided they couldn’t keep it running anymore, so we organized as a board and went to them,” said Gray, who also is an association board member. “We have an agreement to take care of the land, and then we could use it.”

She said the association pays for taking care of the lawn from mowing the grass to trimming the trails.

“We have wonderful volunteer support from monetary to work days throughout the year to clean out the brush,” she said. “People come with chain saws, and we do some workdays on Saturday mornings to clear it out.”

She said there are about 6 miles of trails throughout the 78 acres, used by people on bikes, cross-country skiers in

the winter, bird watchers, groups from colleges and many campers.

“It gets used a lot and at different times of day. There are some who come in the morning, the mid-morning crew, the afternoon crew, throughout the day…” Gray said. “There’s insurance, of course. We do have full liability insurance.”

The Facebook page for the association has over 300 members. Gray said it also helps that those who use the park do a great job of cleaning up after their dogs, and they provide a trash can toward the entrance of the park.

Many who use the park enjoy it for being so open, both for the dogs and for nature itself.

“What really bothers me is the environmental impact,” said Jan Reichard-Brown, community member. “I don’t know who’s supposed to be in charge of guarding the Susquehanna (River) and the waterways … So when it comes to permitting, I don’t know who’s in charge.”

The park has dirt trails that often can get wet.

“We all have these boots on. It’s usually sopping wet … It’s going to be tough to build on,” said Judy Grisel, community member.

Grisel said she enjoys the more wild feel of the park.

“For me, the most important impact is for the community … It’s just a place where people come and gather throughout the day,” she said. “It’s hard to come here any time it’s light and not find people walking, making relationships.”

She said it can be hard to find a park that is not a playground.

Reichard-Brown said the park opened as part of an Eagle Scout project by Jon Sidney Apfelbaum around 2008.

“Jon Sidney cut the first trails … In the beginning, it only went down as far as the creek,” she said. “I’ve been coming here with my dogs since then. My son was in his class.”

She said it was supposed to be an open area.

“This area has always been intended to be community open, green space,” she said. “It makes me sad because Jon Sidney worked hard and Boy Scout Troop 538 worked hard to get this going. To have it just go away because someone wants to sell the land is a shame.”

Sarah Alexander, community member, said she fears what will happen when the place is sold.

Martha Holland, community member, said there has been confusion over what the property entails in order for there to be construction on it.

The park does contain wetlands, according to Bill Dietrich, district manager of the Union County Conservation District.

“There’s likely some wetlands on the property somewhere. The burden is on the landowner to do a jurisdictional delineation for wetlands,” he said. “That’s a very official procedure that takes place. They have to hire a professional to conduct an investigation.”

Dietrich said the issue is there is land on the park that is not wetlands.

He said there are a lot of hoops and “layers of protection these folks will have to go through” if indeed a purchase happens.

Representatives of Hallowing Run Youth Organization could not be reached for comment as of press time.