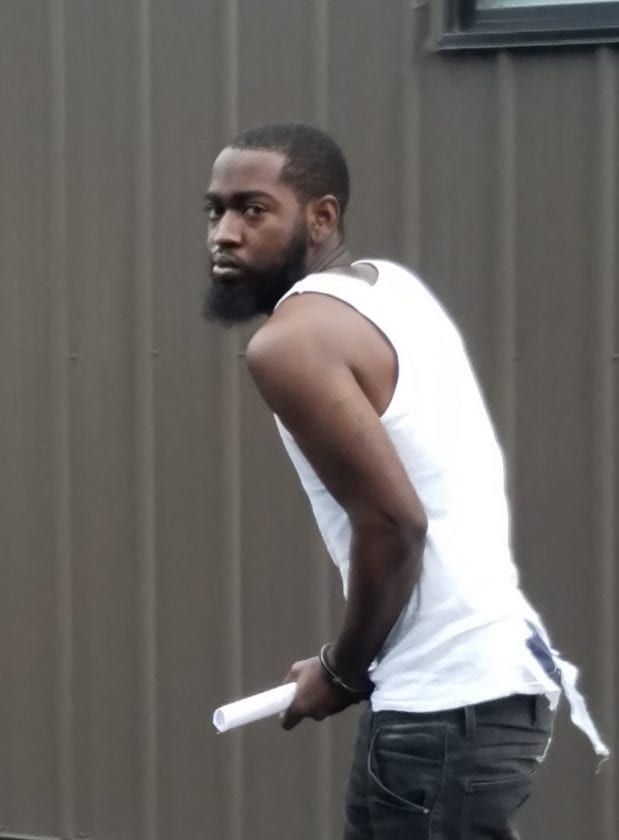 As motorist Kenneth Bonaparte attempted to elude being captured by police early Wednesday afternoon, his passenger, Adrian-Michael Harry, suddenly threw “a large black eyeglass case” out a window that landed in a yard at Campbell Street and Park Place in the city, according to an affidavit.

One officer stopped to pick up the case while other officers involved the 1 p.m. pursuit — state troopers and members of the U.S. Marshals Office Fugitive Unit — continued to follow Bonaparte, who was traveling at a high rate of speed.

At the intersection of Park Avenue and Cemetery Street, Bonaparte lost control of the SUV, striking a utility pole before landing in the front yard at 639 Cemetery St., court records state.

Both Bonaparte, who carried a local address of 630 Cemetery St., and Harry, of 941 High St., bailed out of the vehicle, but were quickly captured, according to the lead investigator in the case, a member of the county’s Narcotics Enforcement Unit.

The officer who stopped to pick up the tossed eyeglass case found a large amount of drugs all packaged and ready for sale inside, investigators said.

The drugs included everything from heroin, powder cocaine and crack cocaine to methamphetamines, buprenorphine strips and pills as well as oxycodone hydrochloride and clonazepam, investigators said.

The pursuit started in the area of Park Avenue and Green Street as both the fugitive unit and narcotics enforcement officers were attempting to locate the 30-year-old Harry. Investigators already had a warrant for his arrest, charging him with allegedly selling cocaine to a confidential informant on Aubrey Court, near Park Avenue and Grier Street, on April 4.

An officer spotted Harry on Park Avenue, but the fugitive quickly walked out of sight into a backyard, court records state. However, seconds later a white Jeep backed out of the same area and turned on to Kaupp Place.

As it was pulling away, the officer spotted Harry in the front passenger seat.

Hours after being captured, both Bonaparte and Harry were taken before District Judge William Solomon to be arraigned. Bonaparte faces a total of 16 drug-related charges plus felony fleeing police and a misdemeanor, recklessly endangering.

“He is a flight risk. He took off on us today,” the arresting officer told Solomon, who ordered Bonaparte jailed in the Lycoming County without bail.

Harry was arraigned on the drug charges stemming from the warrant and was jailed in lieu of $250,000 bail.

Facing charges of abusing an infant, a man recently sought to suppress evidence from an earlier possession charge. ...