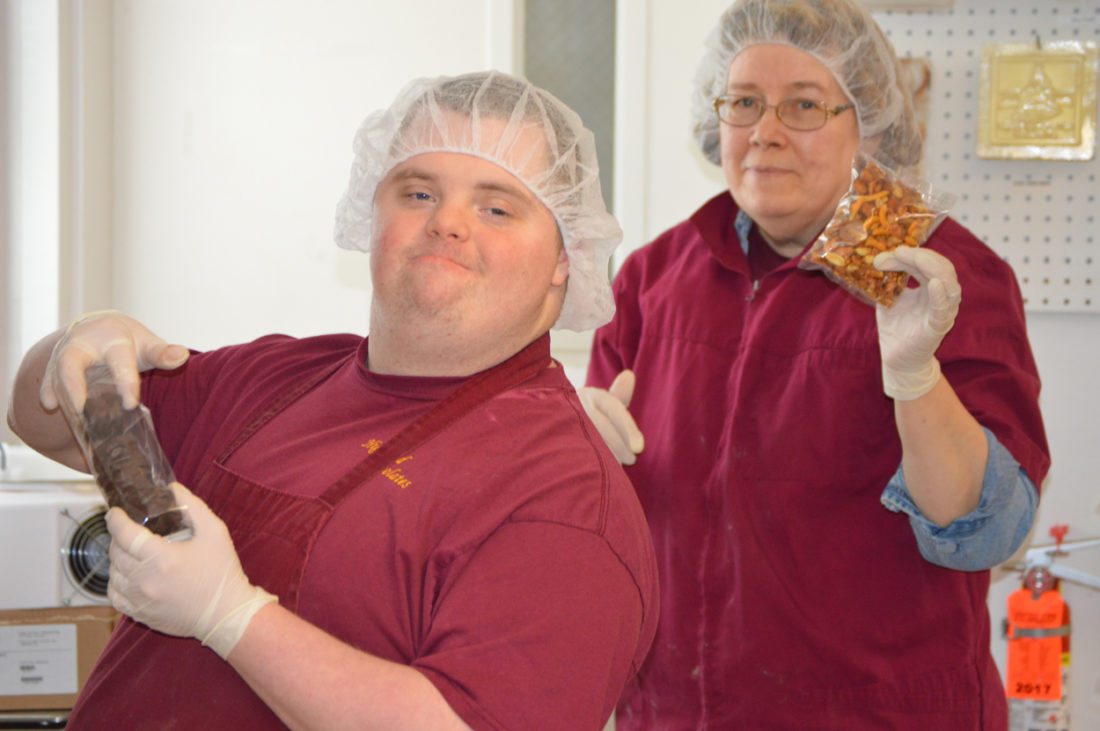 WELLSBORO — Chocolate, glorious chocolate, fills your senses both visually and through its unmistakable aroma as you enter the storeroom of Highland Chocolates, 11724 Route 6.

The walls are lined with the handiwork of the chocolatiers who work in the adjacent area, making delectable treats.

Highland Chocolates started out in 1994 as a Tioga County Human Services program. It began with one or two staffers and three individuals making the chocolate, according to Amy Welch, manager. It has since grown to four staff members and 14 chocolatiers, although they are able to employ up to 20.

Five years ago, Partners in Progress, which is a vocational agency in Mansfield, became the owner and operator. It works with 125 individuals at 15 locations providing employment or programs, all serving area individuals with disabilities, Welch said.

“They all work different days. Most of them have other jobs that they go to or other places they work or have programs,” she said.

Welch became interested in working with Partners in Progress through hearing about it from friends.

Since opening, business has steadily improved.

The chocolate used is all made in the state but comes from different locations, so Highland deals with a distributor. From November 2016 to November 2017, the business purchased 5 tons of chocolate from its distributor, including milk, dark, white and sugarfree varieties.

Choclatier Michael Morgan has been at Highland for 13 years.

“I have a lot of good feelings about this place. I’ve made a lot of good friends here over the years,” he said. He revealed that his favorite candy is the peanut butter cup.

One of the candy makers’ specialties is pretzel bark.

Another worker, Debra Blackwell, likes the milk chocolate-covered pretzels the best and the people she works with are the thing she likes the most about being at Highland.

Another Pennsylvania business, Herr’s Pretzels, of Nottingham, donates the pretzels used in the confection.

“They have always donated. No one can remember when it first started happening, We use them in our pretzel bark, which is what we’re most known for. We make chocolate-covered pretzels and a new candy, which is called the tree stump, which is peanut butter and caramel sandwiched between two mini pretzels and then dipped in chocolate,” Welch said.

They also use them in their s’mores candy, which is pretzel bark and marshmallow put in between graham crackers and dipped in chocolate.

Even though the big candy holidays, Valentine’s Day and Easter, have passed, Highland is gearing up now for Mother’s Day. It also has seen an increase in favors, for weddings, anniversaries and proms.

“We just did spring fundraisers for the schools. That was really big this year. We did four more this year, than in past years. That’s another part of the business that’s expanding, fundraising,” Welch added.

Highland is open every day except Sunday. If you’d like to see how the chocolate confections are made, tours are offered Monday through Friday until mid-June. From then until the end of October, tours are held every day the store is open.

“The environment is the best part of working here,” said tour guide Meaghan Jayne, whose favorite candies are milk chocolate peanut butter cups — although she likes dark chocolate the best. “The camaraderie of the chocolatiers and the staff is my favorite thing about working here.”