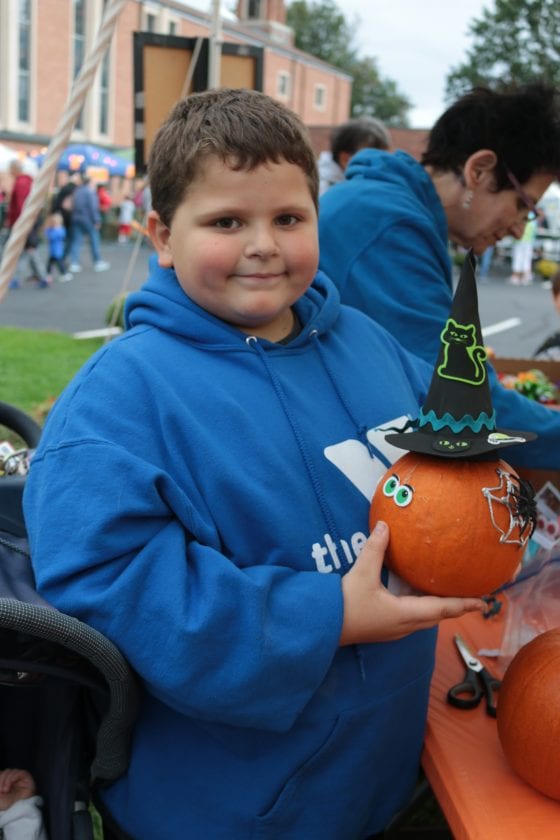 Featuring food, crafts, music and community spirit, the annual Our Lady of Lourdes Church festival was held Sept. 13 and 14 in Montoursville. Father Michael McCormick, who was visiting with people at each booth, said the event “brings the church people together with the community.”

This is about the 15th consecutive year for the festival held next to the church at 100 Walnut St., Montoursville.

“I remember coming to it when I was little,” John Marshalek said. “It was held next to the fire hall then and was a chicken barbecue. The event was held on and off for a few years and moved next to the church. We usually have a great turnout but tonight we may have to compete with the football game, though some might stop over before or after.”

“This is one of the best festivals we ever had for both nights, but especially Saturday night,” Barbara Burchanowski, pastoral associate, said.

The event featured a variety of food to choose from for an evening meal or snack including ice cream, funnel cakes, meatball hoagies, fresh cut fries and walking tacos. According to Burchanowski, each night featured a theme and sold out. Friday night was a chuck wagon country theme and featured smoked beef brisket. Saturday included Polish items such as homemade stuffed cabbage, pierogies and haluski.

“A group of us got together with Helen Lorson, who bakes for Rupert’s Specialty Meats in Montoursville,” said Sue Leisenring, who was manning the lottery booth. “She is the pie lady. We followed her directions and they came out beautiful.”

Lorson, who will be 90 next month, said, “I don’t know how to say no. This is our first year so I don’t know how the booth will go, but we had a great time — even had a little flour on our noses. We didn’t know the weather so we couldn’t do eggs or cream. We decided on apple, peach, cherry and blueberry.” All fruit for the pies was donated by Marshalek’s Fruit Farm, Montoursville, and all 47 pies sold out.

Tickets were purchased at a booth to use throughout the festival rather than money. There were games of chance such as a cake and wine wheel, dime toss and basket raffle. Children could ride a train or roller skating zebra, decorate a pumpkin and everyone could enjoy the music of Leo and KG with Family Traditions on Friday and a deejay on Saturday.

Kathleen Stiber, of South Williamsport, was trying to decide how many tickets to purchase for the basket raffle. “They are so nice and I don’t want to put it in just any one,” she lamented. “It gets so busy here. I want to play the cake and wine booth. Last year I won a bottle of wine and it was so good and sweet.”

Eli English, 9, son of Ariel Woodring, Loyalsock, was decorating a pumpkin with a black hat. He was accompanied by his nana, Chris Egli, and they come to the festival every year. English was looking forward to trying to win a vanilla cake, his favorite, at the cake wheel.

‘Mom Prom’ back in April

The Annual Williamsport Mom Prom returns April 18, but its organizers already are looking for volunteers and ...

LOCK HAVEN — Members of the historic Masonic Temple in downtown Lock Haven want to give the community a ...

MUNCY — With the first week of 2020 officially in the books, an annual project began last Saturday and continues ...