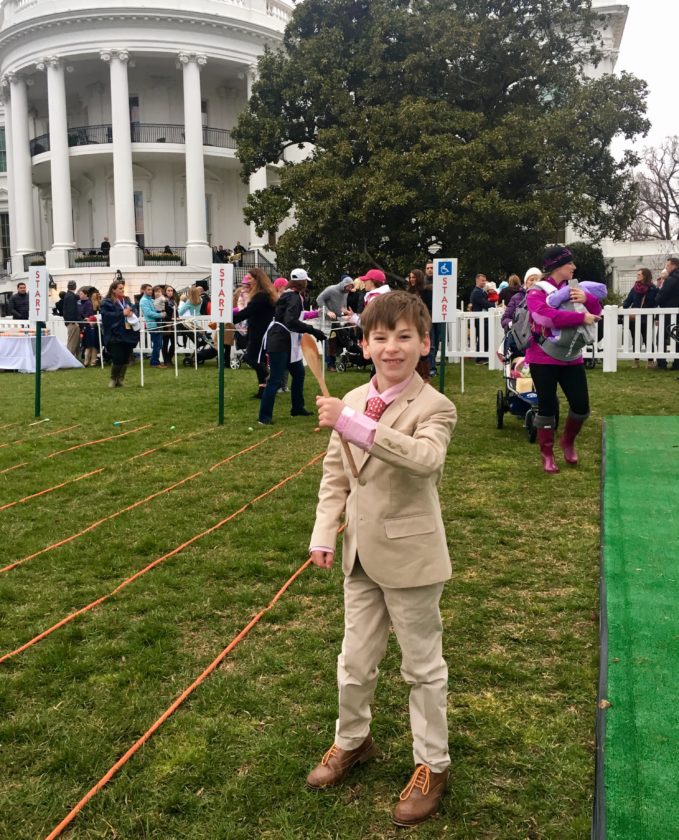 For 10-year-old Jacob Stopper, attending the White House Easter Egg Roll last week was the realization of a dream.

A history aficionado, particularly of anything pertaining to presidents, for Jacob, being able to attend the yearly event in Washington was the highlight of his Easter weekend. Along the way to Washington, Jacob and his family also visited Monticello, the home of Thomas Jefferson, and Mount Vernon, George Washington’s home.

Jacob is the son of Jim and Elise Stopper, of Loyalsock Township, and a fourth-grade student at Schick Elementary School.

His interest in all things presidential began two years ago, although he never thought that he’d go to the White House to see the current president.

“I was at school one day and I picked up an Abraham Lincoln book and that’s how I started liking presidents,” he said. According to Jacob, he now has “tons” of books about presidents.

According to his father, Jacob was among the thousands of children who attended the annual event the day after Easter. A friend of the family who works for the Republican National Committee learned of Jacob’s interest in presidents and obtained the coveted ticket for him.

To accommodate the large number of children, those attending are divided into groups, with each group having a two-hour time slot.

“We did stay a little late,” Elise said, “because we heard that President Trump was coming out.”

Jacob got to see the president, but he didn’t get to meet him.

“He was accompanied by the Easter Bunny,” Jacob said with a laugh.

The president and Mrs. Trump and the bunny came out onto the White House portico and were introduced to the crowd, Jacob’s mom said.

In addition to the bespectacled Easter Bunny, there were also members of local Washingon sports teams dressed up like former presidents at the event.

Although Jacob did not get to meet the president, he did connect with a member of the White House team who is familiar to anyone who watches the daily news briefings.

“I got to meet his press secretary, Sarah Huckabee Sanders,” Jacob said. He also has a photo of the two of them together as a memento of his visit.

“He was kind of shy to go up there,” Jacob’s dad said, “but I told her he was her biggest fan and she started talking to him.”

There were several activities for the children to do in the two hours they are allotted. The guests were treated to stories being read by members of the White House staff, such as Lt. General Keith Kellogg and Sanders, in addition to First Lady Melania Trump. There is a cookie decorating station, a place where the children can write letters for soldiers in the military and of course the Easter egg roll.

Each child, according to Jacob, is given a wooden spoon and a hardboiled egg, which has been dyed. The egg is then rolled along one of several lanes that have been set up on the White House lawn. Jacob admitted that he got a little off track and rolled his egg three lanes over.

Drawing on his extensive knowledge of presidential history, Jacob shared that the first president to hold a White House Easter Egg roll was Rutherford B. Hayes in 1878.

Another highlight of the weekend was choosing a church for Easter services. When Jacob’s father was going over the list of churches and mentioned St. Matthew’s Cathedral, Jacob exclaimed, “That’s the church where JFK’s funeral was.”

“We knew that was the church we had to go to,” his mother added.

Jacob has his eye on Washington in the future too, but in the area of a career in politics.

“Congress, governor of California, senate from California, vice president and president,” he said, cataloging his route to the White House.

“Because I’d like to go there and become an actor,” he said.

“Sounds like you’re following in someone’s footsteps,” his father said.

“Reagan,” Jacob answered. “But, he didn’t serve in Congress,” he added. And, of course, Jacob would know.