Deer season will start early in 2019 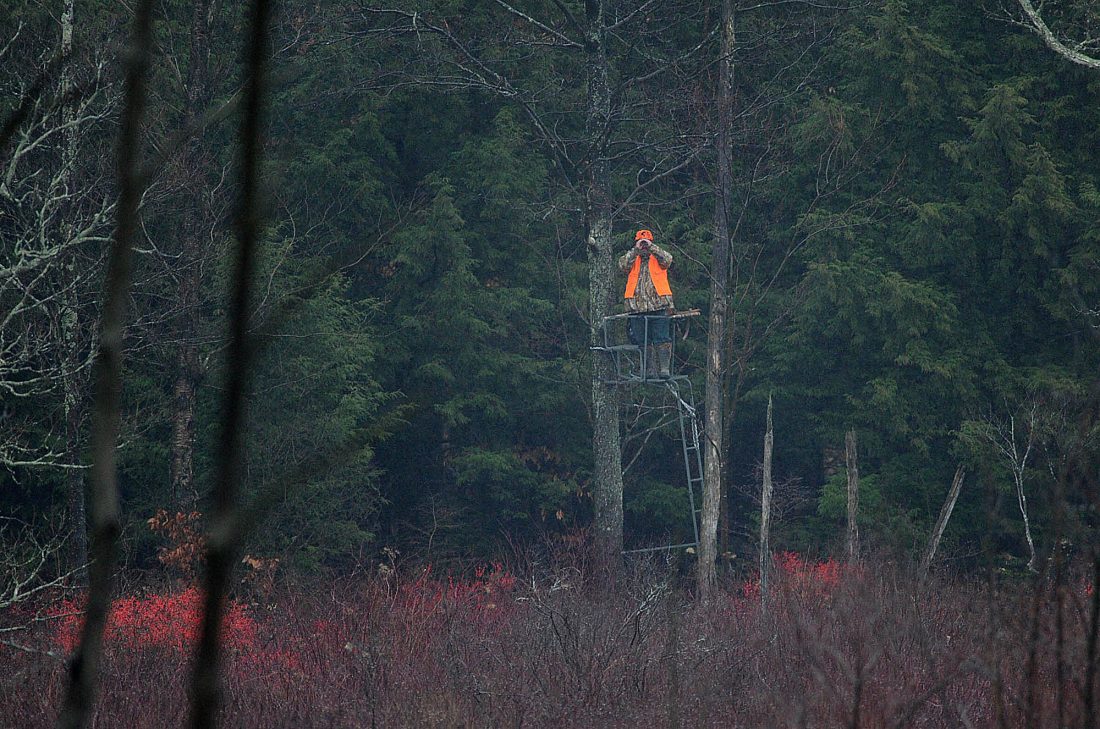 A hunter hunts from a tree stand at State Gamelands 162 in Amity Township, near Union City, Pa., on Monday, Nov. 28, 2011 on the opening day of general firearms deer season in Pennsylvania. (AP Photo/Erie Times-News, Jack Hanrahan) NO SALES, MAGS OUT, NO TV, NO ONLINE

Launching the start of the season two days earlier than usual, the state game commission voted to change the 2019-2020 hunting season.

The change is one that leaves hunters divided, but has been denounced by local gun shops.

Instead of deer season starting on the Monday after Thanksgiving, it will begin on that Saturday following the holiday. This will make for a 13-day hunting season, which includes three Saturdays in total. Hunting on Sunday in Pennsylvania, however, is still outlawed.

Travis Lau, communications director for the game commission, said a motivating factor for an earlier hunt was to allow people who can’t get off of work or youth who can’t miss school and college.

“[The commissioners] had said that they thought that there was some value in a Saturday opener as a recruitment tool, because there is an issue with a shrinking number of school-aged children being able to hunt,” he said.

College students may be able to hunt on a Saturday if they are home for vacation, he added.

Deer populations throughout Pennsylvania are either increasing or remaining stable, according to game commission biologists, and the population will be able to take the expected increase of hunters.

Many hunters don’t take home a deer on the first day, however, and on the grand scale one day of hunting will not make a large difference, according to Lau.

“While the opening day is an important day and many view it as their best opportunity to take a deer, the hunting season stretches the better part of 11 weeks,” said Lau. “So the harvest is spread out. It’s not really dependent on one day in particular.”

Each year the commissioners review the data and determine what would be best for hunters and the deer population, he said.

“[The commissioners] feel like they are obligated at this point to follow up and look at all facets of a Saturday opener, now that we will have one in November,” said Lau. “We’re going to be looking at deer harvest as part of that and if adjustments are necessary moving forward, then so be it.”

Philip Miller, owner of Miller’s Gun Shop in Mill Hall, said he has never missed a deer season in 60 years and cannot see the positive effects of the change.

“The normal deal is that most people went out to their camps on sometime between Thanksgiving and Sunday, spent their time getting ready and getting their stands in the right place — check this, check that, do whatever,” he said. “Now they’re going to be pressured into doing the same thing in a lesser amount of time.”

An earlier hunting season will not only put pressure on the hunters, but businesses as well, he said. They will be forced to work on Thanksgiving to make up for their loss of business on Saturday.

“Friday, which is Black Friday, and Saturday are two of the busiest days in the shop all year long and we’re going to lose one of them,” said Miller.

Kathy Troxell, co-owner of Troxell’s Gun Shop at 2715 Lycoming Creek Road, is concerned about the deer population. Although the population is healthy overall, she said, there could be overhunting in certain areas.

“Three Saturdays — it means it will be like a slaughterhouse,” she said.

If the state game

commission wants to raise more money from selling tags, they should increase the price rather than starting the hunting season on Saturday. Youth are not a reliable source of tag sales, according to Troxell.

Butch Hanley, board member of the Liberty Township Sportsman Association, said he was against the change because it is a pathway to allow hunting on Sunday in Pennsylvania.

“I’m used to starting on a Monday. It’s more of a tradition thing than anything,” he said.

Becky Fry, however, who works with Pipeline Ridge Hunting Club in Muncy, is in favor of the change.

“As long as it keeps the kids hunting,” she said. “That’s all that matters because we’re losing hunters.”