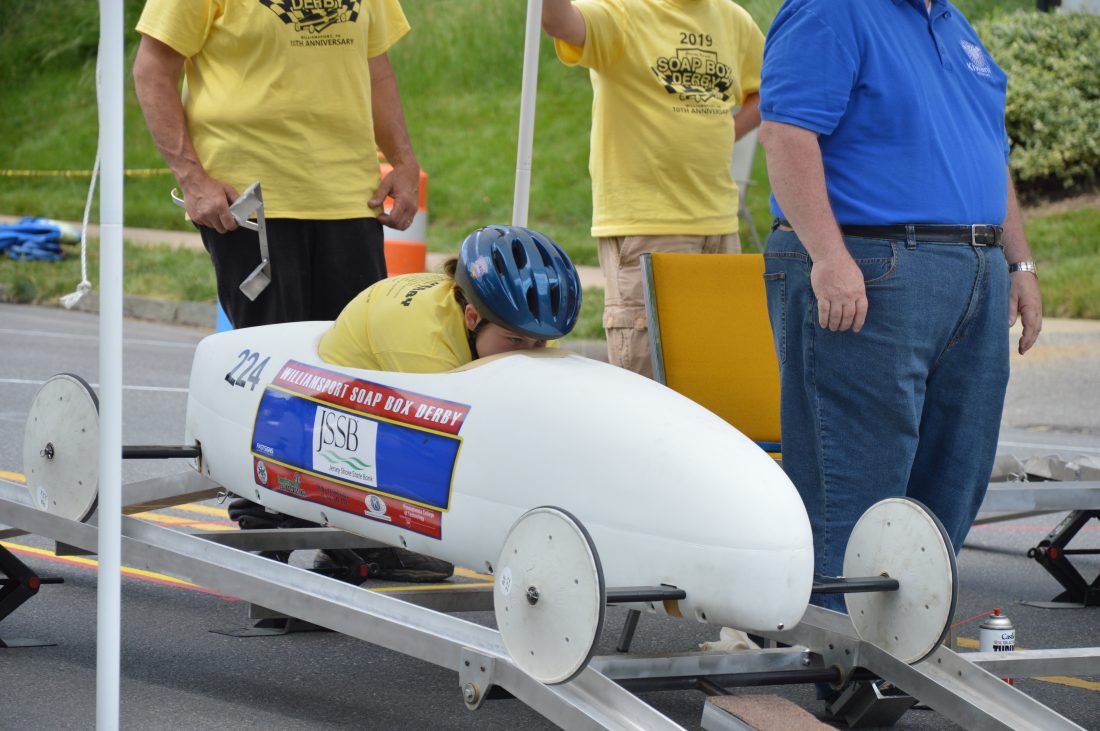 Sarah Stugart, of Williamsport, and Lucas McCahan, of Muncy, are this year’s Soap Box Derby champions heading to Akron, Ohio, for the national race later in July.

Both have been racing for about four years, both fell just shy of first in their divisions during last year’s races, and both are excited to see Akron through the eyes of champions next month.

Sarah won the superstock division, in which car and driver combined weigh 240 pounds. She said she’s looking forward to the challenge that will come with racing in Akron.

“It’ll be tough. Over there, they race every week,” said her father, Jim Stugart.

Sarah Stugart’s plan for that challenge, and advice for all the derby drivers who come after her, is “stay calm, stay low.”

Her parents praised her calmness throughout Saturday, noting she had dropped to the consolation bracket but came back for the win.

“She won one and she lost one,” said her mom, Jodi Stugart. “She went to the loser’s bracket and climbed her way back up to the top.”

Sarah is going into the seventh grade next school year and is participating in multiple other activities such as Girl Scouts, dancing and racing as part of the Teenage Championship Racers at Beaver Springs Dragway, so she plans for this year to be the end of her derby career.

However she hopes more people, especially girls, will get involved in the derby, she said.

Last year, Sarah came in second place behind Lucas’ sister, Meredith McCahan, while Lucas took second to Jael Gilbert, of Loyalsock Township. He came in second in his division the previous year as well. Needless to say, Lucas had high expectations for Saturday’s race.

“He was determined to win this time,” said his father, Jason McCahan. “He said at the top of the hill, ‘If I finish second one more time, I’m going to be so mad.'”

Lucas said it “feels good” to win, and he’s looking forward to experiencing Akron in a different way than he was able to last year.

From July 14-20, champions ages 7 to 17 from all over the country participate in multiple events together, such as a parade and, of course, the final race on the 20th.

With four years of racing under his belt and two consecutive years of taking second place, Lucas’ dedication to the derby has paid off. But winning wasn’t his only goal.

“(Participating in the derby) is a good way to meet new people and it’s really fun,” he said.

“We had a really good day,” he said. “The weather cooperated and everybody raced their hardest.”