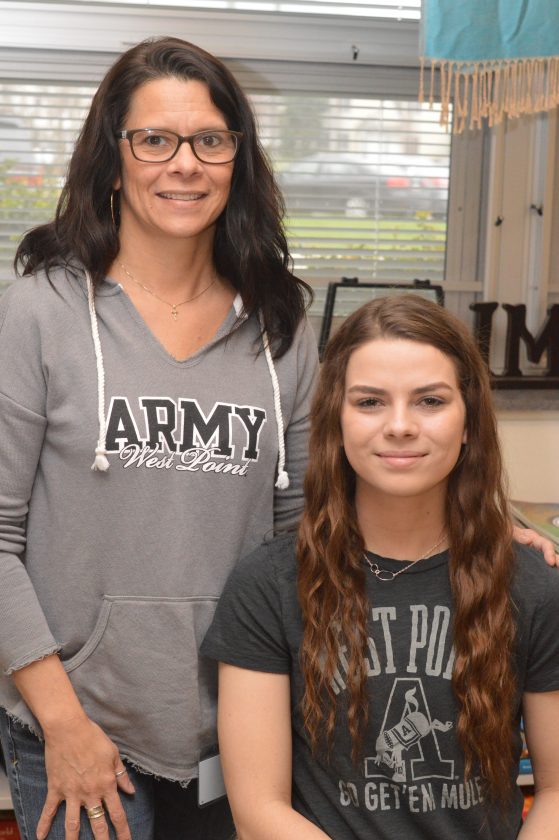 For Loyalsock Township High School graduate Alessia Antonacci, the decision to apply to West Point came after spending the summer at Harvard University and realizing that she wanted more than just academics in her future.

“I was taking courses there and when I was there I had a really strong academic challenge,” she shared recently. “But, I realized that I wanted more than that and West Point kind of offers a full challenge as a person. It’s kind of academic, physical and leadership. I was really looking for something that would develop me as a whole person.”

She also had a desire to serve in the military.

“I always knew that I wanted to serve in the military. My dad served in the Army. But, I’m really focused on academics so I really wanted to go to college. West Point was the perfect combination of serving while I’m still getting my education,” Antonacci said.

Applying to West Point is a challenge in itself and it is an honor to be accepted at the Army’s academy. Alessia admitted that to begin with, the application was a lot of work. Along with the written application, the potential candidate must have a congressional nomination.

“The most important part of the application process is the congressional nomination,” Antonacci said. “For that I applied to two state senators and our local house representatives. There were three interviews for that and three separate applications,” she said.

Alessia’s mom, Wanita Antonacci, pointed out that her daughter was actually the principal nomination from former Rep. Tom Marino’s office.

In order to be accepted to any of the service academies, a student has to be triple qualified, which means academically, physically and have leadership potential. They also need legal authority, which is the nomination from a representative’s office. Each office has only a certain amount of vacancies at the academies that they can recommend students for. They normally only have one, although they can nominate up to 10 people and then the academy chooses which one of the 10 is admitted.

“An alternate process is if the congressional offices picks one person themselves and they say this is the one person they want to go there and they designate it as a principle nominee,” Antonacci said.

“The principal nominee is the one you need to look at but if she would get disqualified there are nine other people nominated,” her mother interjected.

“It is rigorous training,” Antonacci said.

“Actually the daily life is kind of crazy but it matches more like a typical college day than you would think,” she said.

Most of the military training happens over the summer, although they do incorporate military into a lot of their classes, she added. Antonacci had an opportunity to experience student life at the academy when she visited it earlier this year.

“I went to a military science class and a combative class. But, a lot of the rigorous training is over the summer when they do field training exercises. that’s when basic train starts everything,” she explained.

Antonacci will start at West Point in July and after basic training she will be her classes.

“They really like to focus on academics for the fall and spring. There is a two-week break for Christmas and when the spring semester ends you kind of get to choose what you do with your summer,” she said.

She noted that cadets can take required courses during the summer or choose to serves as a leader in cadet basic training for new cadets coming in or there are also study abroad opportunities.

As for the future, post West Point, Antonacci is required to serve a five-year active duty commitment. Her end goal is to be an anesthesiologist and she shared that she’d like to do that in the military.

Her mom admitted that she is super proud of her daughter for being accepted at West Point.

“I will brag her up more than she will herself. She’s always been interested in the military,” she said.

She shared that she had a picture from when her daughter was about three years old and the family had attended a reunion of airborne soldiers who had jumped in on D-Day.

“She was just really interested in talking to them. She made us buy her a book on airborne. I kind of knew that she would do something along that line. It wasn’t a shock to me,” she added. “Her father and I really love our country so she’s grown up with that.”