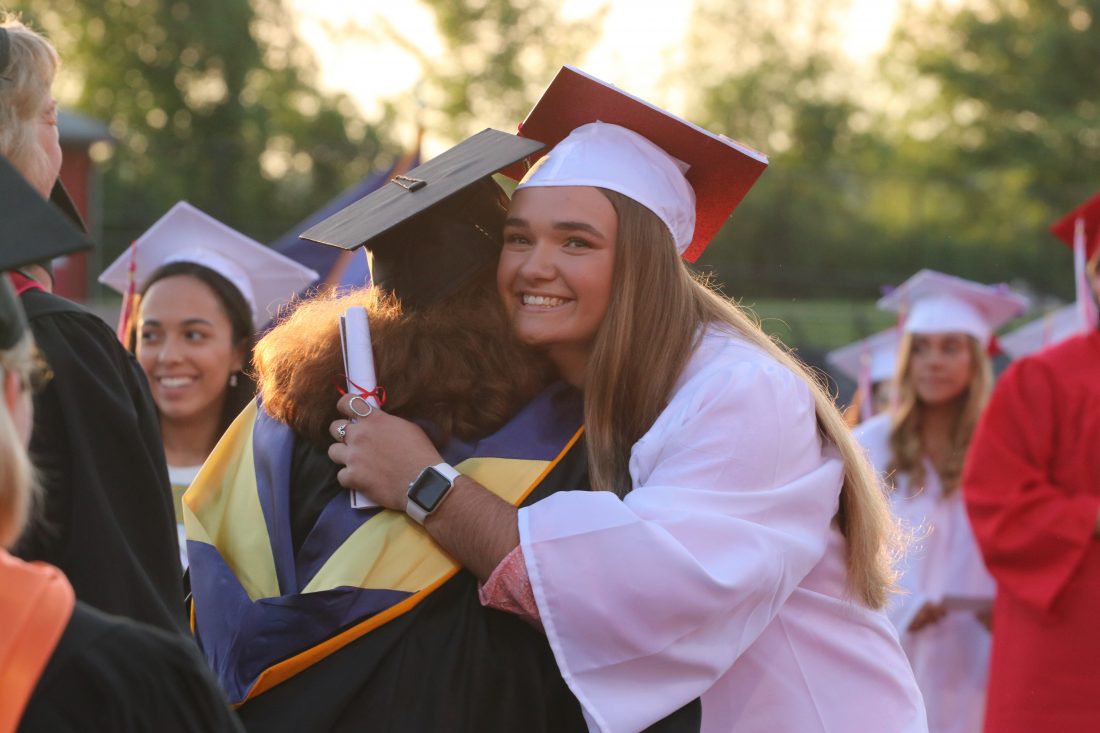 KAREN VIBERT-KENNEDY/Sun-Gazette Lynna Robertson gets a hug from her mother Williamsport Area School District teacher Jenn Roberston after Lynna received her diploma during the 148th annual Commencement at STA Stadium on Thursday evening.

With a sea of cherry red and white across the field, it was a sight to see the class of 2019 graduate from Williamsport Area High School on Thursday night. The stands were filled to the brim with friends and family celebrating the 13 years of academic and athletic accomplishments of the class.

Following the vocal performance of the National Anthem by senior class member, Alexis Griess, two members of the class — Kayleigh M. Early, and Xzavier S. Watson — acted as the class speakers to deliver remarks during the ceremony.

The remarks centered around the class quote by author Lucy Maud Montgomery: “I went looking for my dreams outside of myself and discovered, it’s not what the world holds for you, it’s what you bring to it.”

Early reflected on the day they all reached, despite the highs and lows, ups and downs of the past four years.

“The ups and downs of high school are impossible to ignore,” said Early. “But the accomplishment the graduation signifies is undeniable. On this very special day, every person’s mind is on the future. And I think I speak for most of us, that though the future is uncertain, it is a hopeful place where any dream can be obtained.”

Watson continued the remarks with a laughter-filled speech, which he said he was shocked to be delivering.

“You feel that?” asked Watson. “That excitement? It’s electric. … How did I manage to get to speak this day? Beats me honestly, at the way things are going, I might run for president.”

A night of dreaming, Levi W. Roush, class of 2019 president, reflected on where their days all began, childhood, and the many memories they at the time just thought were fun times.

“Williamsport Area High School, surrounded by so many trees sometimes feels as though it is in the midst of the Hundred Acre Woods,” said Roush. “Pooh’s friend Christopher Robin once said to him, ‘We didn’t realize we were making memories, we just knew we were having fun.’ “

Roush continued with reflecting on the dreams that began in childhood and continue to today.

“Dreaming is something we continue to do,” said Roush. “Now, as I look out to all of you, I realize our dreams of who we could be in the future no longer are fantasies, but possibilities.”

The academic talents that would turn fantasies into possibilities were on full display at the ceremony as Brandon Pardoe, head principal, announced the multiple prizes and academic honors. These honors included the 45 students who wore the National Honor Society emblem across their chest, as well as the announcement of both salutatorian Derek Leris and valedictorian Kayleigh Early, both receiving massive cheers.

Amongst the academic and athletics awards, Pardoe took the time to recognize the students committed to serve in the armed forces as they walk out of the school’s halls. The 11 students stood tall with the veterans in the audience after Pardoe requested they stand so the audience could express their gratitude.

Dressed in red and white, the soon to be alumni walked across the stage to shake the hands of the principals. The crowd screamed and shouted for their individual graduates, celebrating each of their academic accomplishments over the past four years and looking into their futures filled with dreams that can become reality.

With the recent move from the red phase to the yellow phase established by Gov. Tom Wolf, some churches have taken ...