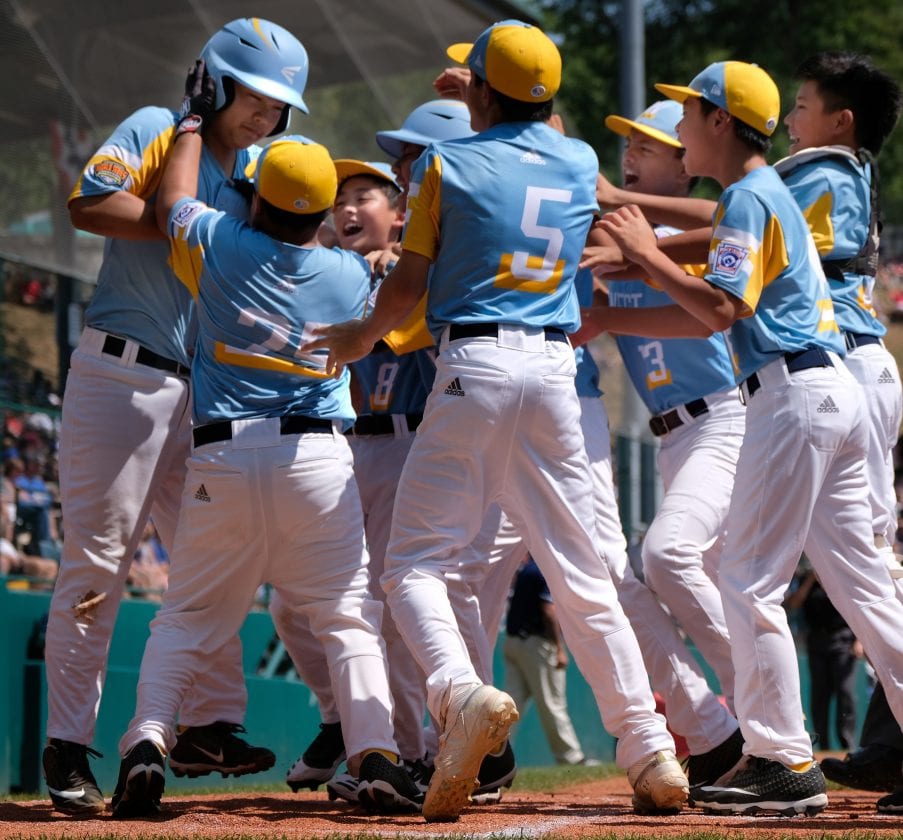 Jaren Pascual (18) is mobbed at home plate by his West team mates after hitting a home run in the first inning against the Mid-Atlantic team during the Little League World series at Lamade Field in South Williamsport Sunday afternoon. DAVE KENNEDY/Sun-Gazette

No one could see him, but Jaren Pascual knew he was standing beside him. So did his Central East Maui Little League All-Star teammates and coaches. So did all the Wailuku, Hawaii fans.

Pascual knew he had a father, friend and hero helping him along the way as he repeatedly squashed Louisiana rallies last Friday, throwing a complete game as Wailuku won its Little League World Series opener, 5-2.

Pascual felt his late father, Tony Pascual, as he rounded the bases Sunday, hitting a home run that set the tone for Wailuku in a 6-0 win against New Jersey. Wailuku played in the winner’s

Tony passed away last January after fighting a courageous four-year battle against cancer. But his legacy lives on through his family. Now, Jaren and his teammates are paying Tony quite a tribute, moving within a victory of reaching the U.S. Championship.

“He’s totally here with us,” Wailuku manager Brad Long said. “I’ve told Jaren when he pitched (against Louisiana) his dad is standing right next to him.”

“I feel like he’s giving me a lot of encouragement when I’m out there on the field,” Jaren said.

The power of that encouragement, the power of all those baseball and life lessons Tony taught Jaren have been evident all summer. He has developed into one of the country’s top Little League Baseball players and has delivered repeated clutch performances when the pressure has been highest.

In addition to throwing that complete game against Louisiana, Pascual has played stellar defense at third base and hit .400 with a home run and three runs at the Series.

Jaren could write his father a thank you note, but no words are necessary. His performance provides all the gratitude.

“Jaren is such a strong kid. He pulls it together well,” right fielder Marley Sebastian’s mother Raymi said. “He’s a really good kid.”

His father was quite a man and his mother Lynn is an amazing woman.

Lynn has been running around the country throughout this month and did not see Jaren’s first two Series games because she was dropping off Cade at college and then had a flight canceled because of weather. She was expected to be at Wednesday’s game against Virginia.

Lynn has done her best Super Woman impersonation since January and has provided non-stop support for her sons while the Wailuku community has wrapped its arms around them all.

“I don’t know how she does it. She’s so strong,” Sebastian said. “I can’t imagine doing that. Thankfully there’s a good support system back home.”

Both the team and community are like a family and share a reciprocal relationship. They both lift each other up at different times and Jaren has helped elevate Wailuku to the best season in its Little League’s history.

A five-tool player who can play nearly every position, Jaren’s go-ahead, 3-run home run in the regional final helped Wailuku defeat Arizona, 4-1. He hit .600 during regionals and compiled a .733 on-base percentage, while driving in seven runs. He also played error-less defense and shut down Northern California on the mound in the winner’s bracket final.

Jaren did not shut down Louisiana, but channeled Tony’s spirit and showed why his toughness might even outmeasure his talent. He stranded nine baserunners, including at least one in all six innings. Louisiana loaded the bases and brought the tying run to the plate with two outs.

Showing no fear, Jaren went right after the batter and induced a game-ending lineout. Jaren showed no emotion as he calmly walked off the field, but chances are Tony was jumping for joy nearby.

“I felt very relieved that we got out of the game and finished it,” Jaren said.

“He had command of the cutter and curveball. He was keeping them off-balance. We were really happy to see that,” Long said. “We knew he would be able to go the distance if he had command of those two pitches He’s a tiger. He just stood in there and kept going. I’m very proud of him.”

So is his entire town and state. Jaren has handled one of the toughest tragedies any child can, but has continued flourishing.

Like his father did, Jaren is shining a bright light on his community. He is making it a better place and providing it joy. He is every bit his father’s son.

And Jaren knows everywhere he goes, he has an angel upon his shoulder.

“He (Tony) is definitely watching over us,” Sebastian said. “We can all feel his presence.” 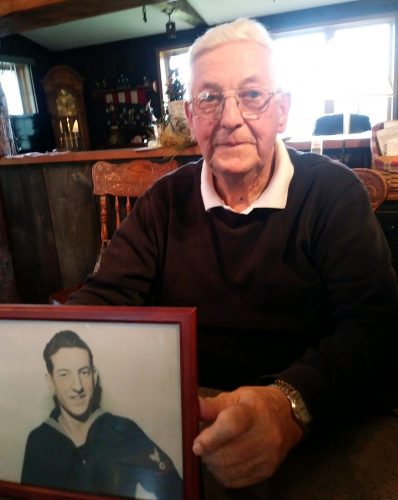