Hosts welcome players into a family 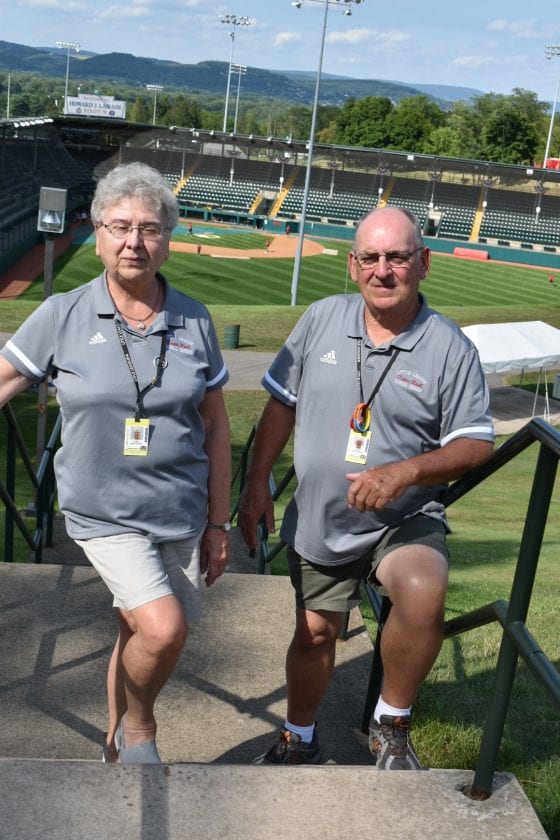 What do you call a group of 42 dedicated volunteers at this year’s Series that includes five new members, two sets of brothers, a nephew, father and son, husband and wife, and two women?

This is not your grandfather’s corps of team hosts. Back in the early days, only men — respectfully called “Uncle” — served in pairs to make sure their assigned teams of just boys got to practice in the right place, had clean uniforms every day and showed up on time for meals in the cafeteria, no matter the language spoken.

Along the way, they see the Series from a unique perspective in the Grove, where the kids aren’t worried about the outcome of the latest game or even the next game, unless they’re playing ping pong.

Sometimes a player has no family members on site and the team host offers an arm around the shoulder and cheers as loud as any mom or dad. They are their kids for two weeks.

Sometimes the hosts are called on to dry tears after a loss only to see the sun come out a few minutes later, even before the teams are done walking back up the hill.

That’s when the magic happens.

The hard-fighting rivals jump into the pool together or hang out in the rec room with their new friends, every one of them speaking not Spanish or English or Chinese, but the language of “kid,” no interpreter needed.

While “team host” is the official title that suits them all like a fitted baseball cap, the uncle moniker still feels comfortable.

Carol Zysset, now in her 19th year as a host, was the first woman to join the ranks. She is paired this year with Cherie Rogers, in her second year. The two women are hosting Asia Pacific.

Chris Rogers, Cherie’s husband, is one of five new uncles. He serves as a utility host.

Like a utility player on the baseball field, these hosts serve wherever they are needed on any given day. Often they substitute for a team host who may have an appointment or other obligations requiring him or her to be absent.

Walt Reed, also in his first year, is paired with Uncle Frank Missigman to host Japan.

Missigman, in his 15th year, is the brother of Larry Missigman, a utility host in his 28th year of service on Team Uncle.

The brothers’ nephew, William Pearson, is a utility host in his first year of service.

Joe Girio, in year 22, is host to the Latin America representative. His brother George, with 10 more years of service, is a utility host.

Pete Luppacchino, at 27 years, and son Josh, at seven, have teamed up to work with the Australian boys. The Lupacchinos are part of a three-generation legacy of service: Pete’s father and Josh’s grandfather, the late Pete Lupacchino Sr., served as the Uncle in the family first.

Added all together, the 42 men and women hosts have nearly 600 years of service on the Uncle Team.

Mick Cioffi, host to New England, leads this team with 43 years of experience. In his first 10 years he paired with his dad Nick, now retired.

Utility Host Ed Weinhoffer, at 34 years, was joined by his wife Carol 14 years ago at the Host Office in the Grove.

“I’m not a host,” Carol emphasized, but starting in 2002 through 2018, she served as an overnight chaperone for girls who play in the Series. “I didn’t follow them around,” she said, explaining that each of the 10 girls she chaperoned rejoined the team for breakfast in the morning and returned for lights out, just like her teammates. Carol answers the phone in the office, handles batting cage signups, and performs other clerical duties during her volunteer shifts in the office.

Like all seasoned Uncles, Ed Weinhoffer tells stories of teams and games gone by, and talks about the friendships he has made and the great people he has met.

He clearly remembers a Latin American team many years ago that had only one bat for the team, one chest protector held together with duct tape, and five or six beat-up baseballs.

“And they made it to the World Series,” Weinhoffer said, shaking his head.

The host was touched when local businesses and vendors generously stepped up to make sure the team was outfitted with everything they needed.

“I can’t do that in less than a thousand words,” he stated simply.

All the uncles are like that, male or female, seasoned or new to the game. They enjoy their players, managers and coaches as well as the close knit camaraderie they have with each other in the team host family.