Curacao in 1st championship game since 2005 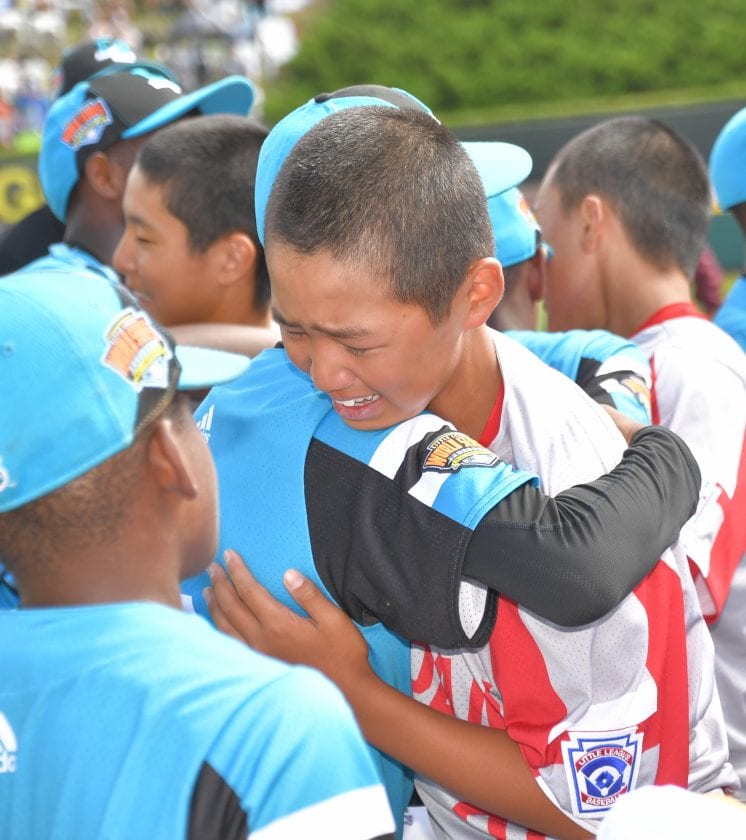 For a moment Saturday, the fans at Lamade Stadium collectively held their breath. The answer to the “will it or won’t it be caught” question seemed to take an eternity as the baseball hurtled through the unseasonably cool August air.

Curacao’s Keven Rosina glided into the frame and reached out his gloved left hand and provided the answer the nearly 23,000 people in attendance waited for.

The ball was caught.

Gloves on the infield were thrown into the air.

Curacao defeated Japan, 5-4. But it took every last out to beat the country which has appeared in six of the last nine Little League World Series championship games. Pabao Little League of Willemstad, Curacao, is playing in the third world final in its league history, but the first since playing in back-to-back finals in 2004 and 2005. Curacao won the 2004 world championship.

“This is very important,” manager Michelangelo Celestina said. “It feels like we’re on the map again.”

Japan made the outcome unsure until the final out when it scored two runs in the bottom of the sixth inning on a wild pitch and errant throw to the plate. A game which once seemed to be well in hand when Curacao’s Curley Martha hit a two-run home run in the top of the fifth inning, was now perilously close to being tied with the tying run on third.

Ryohei Ushikubo, who was 3 for 5 in his previous World Series at-bats, smacked a 1-2 pitch into the left-center field gap causing the entire stadium to go silent ever so briefly. Then Rosina glided into the picture to catch the ball and send the Caribbean fans above the third-base dugout into a frenzy.

“My heart was racing,” Celestina said as he pounded on his chest. “It was a really good moment for me. I didn’t see (Rosina) at all. When he caught it, I was like ‘oh, there he is.’ It was a little bit scary.”

But Curacao did just about everything as well as it possibly had to Saturday to defeat the perennial world championship contenders. When Japan starting pitcher Taishi Kawaguchi struggled with his command in the first inning and walked a pair of batters, they scored a run. When an uncharacteristic second error from Japan helped load the bases in the third inning, Curacao’s Shendrion Martinus launched a two-run double off the wall in left field which was less than a foot from being a grand slam.

Martinus had only two hits in his previous 10 at-bats, but came up huge in this moment, driving in his fourth and fifth runs of the tournament to help his own cause as Curacao’s starting pitcher.

Japan hadn’t yet made an error in the World Series until it committed two yesterday.

“We’re not perfect. Sometimes different things like that happen,” said Japan manager Koji Yamashita through an interpreter. “It was our day to make errors.”

Japan has always seemingly found a way to win in these moments in the past. Martha made sure it didn’t happen. The hard-throwing right-hander with the knee-buckling curveball struck out four over 3 2/3 innings of relief and earned his second win of the tournament.

There was a point before the fifth inning where Celestina could have pulled Martha before reaching the 20-pitch mark to save him for today’s world championship game. But that thought never crossed Celestina’s mind. He was focused on winning Saturday’s game, and Martha was his best chance to do so.

Now, Curacao has Rosina available to pitch today. Rosina threw a three-hitter in a win over Canada back on Monday.

“We wanted to let him finish,” Celestina said. “We have the big show (today). I have to make the decision that’s going to help us go all the way.”

Martha also provided the winning margin for Curacao with his third home run of the tournament. The ball hadn’t yet crashed into the bushes in center field and a young fan hadn’t yet dove into those bushes searching for the baseball. But Martha’s right hand was already extended with his index finger pointed to the heavens.

Curacao’s star player knew off the bat he had hit a home run. He took his time trotting to first and enjoyed every minute of the trip around the bases before joining the bouncing mosh pit of teammates at home plate. That one Ruthian blast was a key in helping Curacao win its fourth consecutive elimination game since dropping a 4-0 decision to South Korea a week ago.

And now, the country which produces more Major League Baseball players per capita than any other country in the world is going to play for its second world championship, and first in 15 years. It would be the first since current MLB players Jurickson Profar and Jonathan Schoop led Willemstad to the title in 2004.

“We know we can play baseball very good,” Celestina said. “Since we began to practice, we talk with them about keeping their focus because when you keep your focus, you gain confidence.”