Bigelow takes advantage of opportunities to score 3 in win 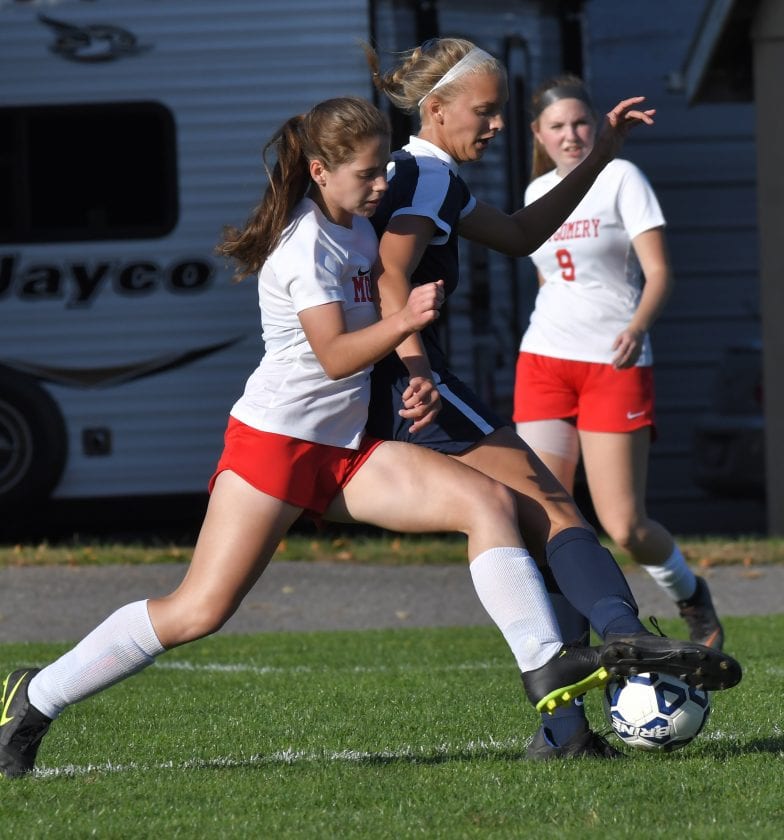 MARK NANCE/Sun-Gazette Montgomery’s Erby Imeri (front) and Muncy’s Aleaha Bigelow (rear) battle for control of the ball in the first half at Ward L. Myers Elementary School in Muncy on Tuesday afternoon.

MUNCY — Muncy coach Jason Gresh knows that Aleaha Bigelow’s presence on the field creates opportunities, either for herself to score or her teammates. And if you give Bigelow even one opportunity to score, she’ll likely put one in. All the senior needs is one little chance to make a move.

That’s what happened Tuesday afternoon. Not once, but three times.

Ashlynn Fowler went to take an indirect kick and noticed Bigelow standing to her right at the corner of the 18-yard box with no Montgomery player around to defend. Fowler quickly booted it to Bigelow, who dribbled for a few steps and then sent a great shot to the left near post off the fingertips of a diving Abi Duck in goal.

It was Bigelow’s second goal and helped propel Muncy to a 3-0 win over rival Montgomery at Ward L. Myers Elementary School.

“They didn’t mark me, so I just took the opportunity I guess,” Bigelow said.

“She had three (goals) tonight and three assists from Ashlynn, but at the same time, she dropped back to center-mid and created lots of opportunities for us that we weren’t able to finish,” Gresh said. “Whether she’s doing the scoring or creating opportunities for herself or others, everybody’s really focused on her all the time.”

Bigelow ended the game with a hat trick, scoring twice in the first half and adding a third goal early in the second half.

“We switched a lot of positions, especially to start the game, had some people in places they hadn’t really played all year. Tried to change things up,” Montgomery coach Melissa Balliet said. “I feel like we fought hard, but we struggled to finish. … Overall we played hard. We didn’t give up at halftime even though we were down 3-0.”

Muncy scored the first goal 16 minutes into the game when Fowler crossed to Bigelow inside the 18. Bigelow took it past a defender near the 6-yard box, quickly turned and rifled a shot to the left post for the early 1-0 lead.

She then scored again from inside the 18 on a Fowler assist with 35:11 to play in the game to make it a 3-0 Muncy lead over the Red Raiders.

“Montgomery kind of controlled the ball the first five, six, seven minutes (of the game) and then once we got our first goal, we were able to settle in and I thought rest of game we sort of controlled the tempo and pace,” Gresh said.

The Indians possessed most of the game, holding an 11-4 shots-on-goal advantage, and Muncy fired a total of 18 shots.

Nita Imeri was huge for Montgomery yesterday. The Red Raiders senior is a Swiss-Army knife type of player who can do anything Montgomery asks of her. Imeri started the game at defender, and routinely chased down through balls to eliminate threats and cleared balls inside the 18 before a Muncy player had a chance to score. And while Bigelow did end with a hat trick, Imeri did a solid job defending against her.

“Her spacial awareness to know where she’s at and knowing those angles to take has been great. I think we see what we do offensively as a threat. It hurts us to take her out of that, but yeah, she’s just a rock back there,” Balliet said. “Her and Erby back there, the Imeri sisters. She did a great job back there shutting Aleaha down.”

Montgomery had just four shots on goal yesterday, three of which came from Nita Imeri when she moved up top late in the second half to try to spark the Red Raiders’ offense. Imeri fired an incredible free kick from 35 yards out that nearly cleared the crossbar for a goal, but Muncy goalie Sarah Dgien jumped and got her fingers on it to tip it backward out of the way.

Imeri had a shot from just outside the side of the 18 that Dgien caught, and another free kick from 30 yards out was low and blocked by Dgien.

“We say she’s hungry for the ball. It’s not always about these crazy ball skills. It’s just wanting the ball, getting to it, fighting for it and that’s one thing that she always does,” Balliet said. “If I could take her and put her in four different spots, that’d be nice. But yeah, no matter where we have her, you’ve seen her at forward, at midfield and at sweeper. She’s hungry for the ball. She wants to protect her area when she’s back there. She does a really good job.”