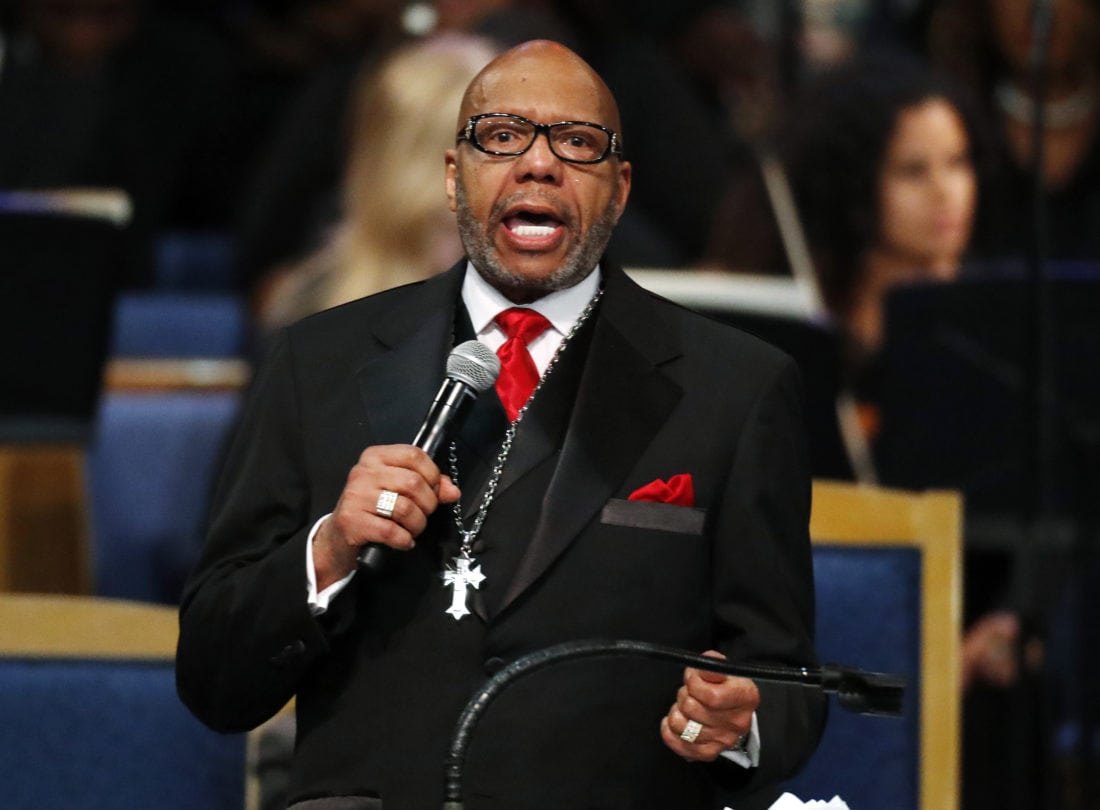 FILE - In this Aug. 31, 2018, file photo, the Rev. Jasper Williams, Jr., delivers the eulogy during the funeral service for Aretha Franklin at Greater Grace Temple, in Detroit. Williams, a fiery, old-school pastor who is under fire for saying black America is losing "its soul" at Franklin's funeral stands firm by his words with the hopes that those critics can understand his perspective. He told The Associated Press in a phone interview Sunday, Sept. 2, he felt his sermon was appropriate. (AP Photo/Paul Sancya, File)

ATLANTA (AP) — A fiery, old-school pastor who is under fire for saying black America is losing “its soul” at Aretha Franklin’s funeral stands firm by his words with the hope critics can understand his perspective.

Rev. Jasper Williams Jr. told The Associated Press in a phone interview Sunday he felt his sermon was appropriate at Franklin’s funeral Friday in Detroit. He felt his timing was right, especially after other speakers spoke on the civil rights movement and President Donald Trump.

“I was trying to show that the movement now is moving and should move in a different direction,” he said. ” … What we need to do is create respect among ourselves. Aretha is the person with that song ‘R-E-S-P-E-C-T’ that is laid out for us and what we need to be as a race within ourselves. We need to show each other that. We need to show each other respect. That was the reason why I did it.”

Williams, who is the pastor of Salem Bible Church in Atlanta, said his words about black women being incapable of raising sons alone were taken out of context. He described as “abortion after birth” the idea of children being raised without a “provider” father and a mother as the “nurturer.”

Many thought Williams took a shot at Franklin, who was a single mother of four boys. But the pastor said a household can become stronger with two parents rather than one.

“Here’s the root of what I’ve been talking about: In order to change America, we must change black America’s culture,” he said. “We must do it through parenting. In order for the parenting to go forth, it has to be done in the home. The home.”

Williams also received backlash for his thoughts about the Black Lives Matter movement.

Some called Williams’ eulogy a “disaster” as his speech caused an uproar on social media and in the funeral crowd, including Stevie Wonder who yelled out “Black Lives Matter” after the pastor said “No, black lives do not matter” during his sermon.

Some questioned why he was chosen to honor Franklin. The pastor, who eulogized Franklin’s father, minister and civil rights activist C.L. Franklin, 34 years ago, said he was appointed by the family to handle the eulogy at her funeral. The pastor said the last time he spoke with Aretha Franklin was a few months ago.

Williams was blasted on social media for misogyny, bigotry and the perpetuation of false science on race. He blamed integration and the civil rights movement for ripping the heart out of black micro-economies that once relied on black-owned small businesses such as grocery stores, hotels and banks.

Williams said he hasn’t heard “one way or another” from the Franklin family, but knows about the social media criticism of him.

“I’m sure much of the negativity is due to the fact that they don’t understand what I’m talking about,” he said. “Anybody who thinks black America is all right as we are now is crazy. We’re not all right. It’s a lot of change that needs to occur. This change must come from within us. Nobody can give us things to eliminate where we are. We have to change from within ourselves. It is ludicrous for the church not to be involved. The church is the only viable institution we have in the African-American community. We must step up and turn our race around.”

Even though Williams spoke for nearly 50 minutes of the eight-hour funeral, the pastor said he didn’t have enough time to delve deep into his sermon. He said he will expound more on his sermon and how Franklin was originally named the “Queen of Soul” for the next two Sundays at his church.