At some colleges, no need to be separated from a beloved pet 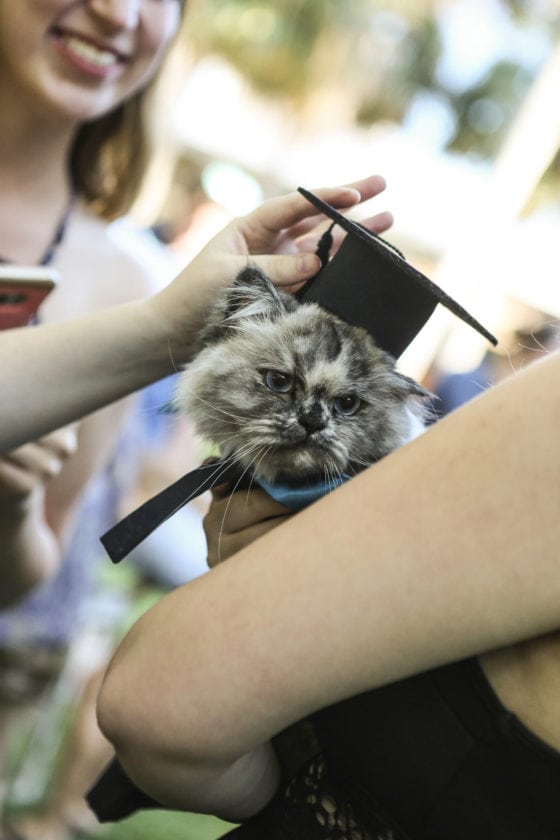 This 2017 photo provided by Eckerd College shows a student and her pet at a pet graduation ceremony taking place at Eckerd College in St. Petersburg, Fla. Eckerd is not the only campus in the country that allows pets, but they've been doing it the longest _ since the early 1970s. Leaving for college involves some difficult changes, and one of them can be separation from a beloved pet. If it's a high enough priority however you might be able to find a college that will let you bring your pet. (Eckerd College via AP)

Leaving for college involves some difficult changes, and one of them can be separation from a beloved pet.

“If an animal is part of your entire life, and caring for them is a huge part of it, to take that away is pretty dramatic,” says Kimberly Brubaker.

If it’s a high enough priority, though, you might be able to find a way to stay together, as Brubaker did: She lives in a dorm with her cat Dino and ball python Mars at Eckerd College in St. Petersburg, Florida.

Eckerd is not the only campus in the country that allows pets, but they may have been doing it the longest — since the early 1970s. While its pet policies are broadly accepting, it’s far from a free-for-all. Brubaker is president of a student organization that registers on-campus pets; oversees their well-being and students’ compliance with rules; and adjudicates problems.

“We do pet checks once a month — we go around and knock on all the doors,” she says. They handle an average of one or two problem reports per month, but most are minor, such as misunderstandings of the registration procedures.

Not only are pets on Eckerd’s campus mostly problem-free, they may actually be beneficial. In a recently published study, students “across the board reported that their pet reduced their levels of stress, and had incredibly favorable things to say about living with the animal,” says co-author Miranda Goodman-Wilson, assistant professor of psychology at Eckerd.

A majority of students reported that pets had a positive impact on their academic performance. “I think that for many students, having a pet provides a structure that they otherwise lack,” she says. “If you have a dog who has to go out to go to the bathroom, that’s a powerful alarm clock right there.”

“If pets are having some sort of psychological impact, it may be that they are serving as a buffer,” she says. “So yes, I’m still having stress, but by having my animal, that stress is not translating into this sort of anxiety in the same way.”

While pets might be good for students, some might worry whether college life is good for the pet. Last year, Mekenna Hooper, a senior at the Johnson & Wales University Denver Campus, decided to adopt a dog. When she contacted shelter and rescue groups, she recalls, “none of them liked the fact that we lived in a dorm,” even though she was sensibly looking for a small, lower-energy senior.

She eventually adopted Max, a 16-pound Yorkie mix who’s now 11, and it sounds like he’s living the good life. With Hooper and her roommate on different schedules, he’s rarely alone more than a couple of hours at a time, and gets all the attention and petting he could ever want on campus. “Everyone knows his name,” she says. “They know his name better than they know ours.”

Goodman-Wilson believes that there can actually be advantages for a pet on campus, where students have flexible schedules and there are lots of eyes on the situation. “More so than your typical animal, there are ways for the wellness of the animal to be checked up on,” she says. “And I think students generally are around their animals more than your average working adults.”

If you’re looking for a pet-friendly college, be aware of each institution’s specific rules. More campuses allow small pets that can be kept in cages and tanks than allow dogs or cats, and where dogs are permitted, sizes and breeds may be restricted. Some restrict pets to upperclassmen; Eckerd only allows pets that students lived with before coming to campus.

Goodman-Wilson expects the number of pet-friendly schools to grow, partly because of the increase in emotional support animals. Once systems are in place for ESAs in dorms, that can open the door to allowing pets in general.

At Elizabethtown College in Elizabethtown, Pennsylvania, where the first pet-friendly housing will open this fall, the new policy grew out of an increasing number of assistance animals, and because of requests to raise service dogs. Now, it’s seen to have a more general value.

“We see this as part of creating a vibrant campus community that is attractive and promotes well-being,” says Associate Dean Allison Bridgeman.

But it also seems clear that there will be more pet-friendly campuses as long as students have anything to say about it.

“I answer emails all that time that say, “Hey, I’m trying to start a pet policy on campus, what are the first steps?’ ” says Brubaker. “I probably get at least one email a week from students at other colleges asking about our program.”