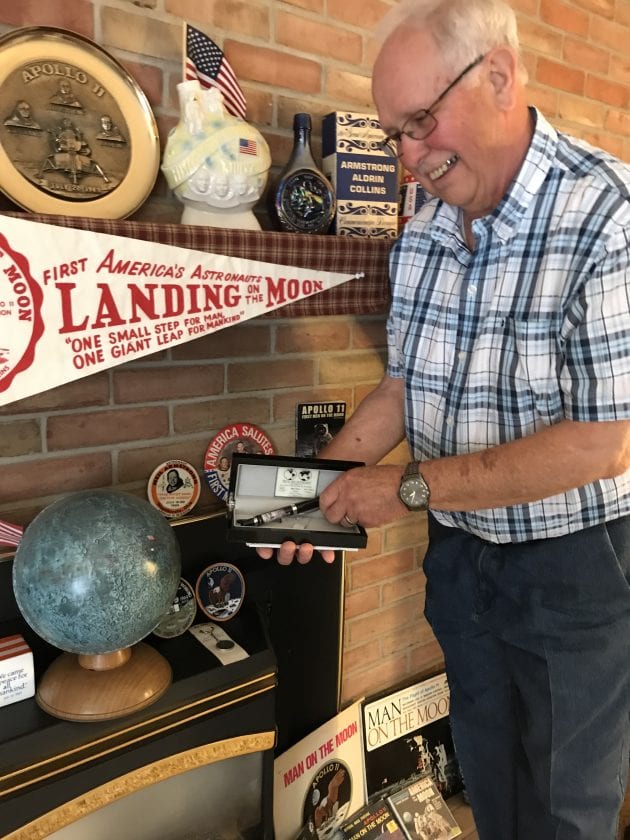 As Neil Armstrong stepped from Apollo 11 onto the moon his words “One small step for man… one giant leap for mankind,” echoed around the world 50 years ago on July 20, 1969. Watching this historic event unveil from his parents home in Glen Lion, Jerry Butcho, of Muncy, did not realize what a lasting imprint this milestone would make.

While living in Hazelton in 1987, Butcho stopped at a porch sale in Jeddo and purchased a lighter, bottle and a fountain pen. Impressed with the items, he began buying more Wheaton Presidential bottles and soon noticed they were taking up a lot of space.

“I realized pens and lighters didn’t take up nearly as much space, and I was able to store them in drawers and boxes. I eventually collected 600 or so each of pens and cigarette lighters,” Butcho said.

He found buyers for most of these in Florida and New Jersey, but confesses that he keeps an eye out for lighters, bottles and fountain pens.

Different items began catching his eye and he accumulated Zippo lighters, lunch boxes, political pins, among others. Then he started thinking about focusing on a new collection, and asked himself “What would have wide historical significance, be of interest to collectors forever and increase in value?”

The answer? The “Apollo 11 Space Flight! First man on the moon,” he said.

While on the moon, the two placed the plaque reading, “Here men from the planet Earth first set foot upon the moon July 1969 A.D. We come in peace for all mankind.”

“It’s wonderful, isn’t it? Those words of peace, and to think that people actually walked on the moon! It’s still hard to take in,” Butcho said in regards to the plaque’s message.

Aldrin and Armstrong also laid memorial medallions in honor of the astronauts and cosmonauts who passed away in flight and training and a 1.5-inch silicon disk, named Tranquility Bay, with goodwill messages from 73 countries, and the names of congressional and NASA leaders.

Butcho and his wife, Gloria, travel to the shops and markets together and have also visited NASA in Cape Canaveral, Florida, and Wapakoneta, Ohio, home of Neil Armstrong.

Butcho finds his collectible pieces in various places, but E-Bay is his biggest source for mining these treasures.

“We go to flea markets and antique malls and shows and fairs, and sometimes friends will pick up mementos,” Butcho said. “There are sites on E-Bay where they list certain collectors’ items.”

“Besides my Apollo 11 pieces, I still do little collections, like beer coasters, post cards, coal mining relics and memorabilia — my dad was a coal miner,” he added

“Over the years I have met some great people at the markets and fairs; we watch out for what others are buying and tip each other off, help each other.”

Butcho appreciates the help he gets from his daughter, son and daughter-in-law and of course, Gloria, especially for putting up with all the clutter over the years.

“One of these days I’m going to have a Moon Room and everything Apollo will be in there” Butcho said to Gloria. “I think that will be a good idea,” she added.