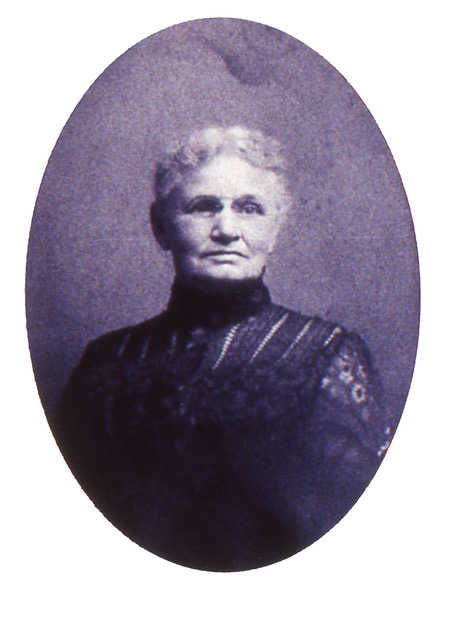 The public library in Williamsport was built with funds donated by lumber baron James Vanduzze Brown (1826 — 1904). Although he named the library after himself, the motivation to establish a free public library in the city actually came from his wife, Carile Cone Higgins Brown (1831 — 1902).

“She prodded him into it,” said the late June E. Baskin in an article in the Williamsport Sun-Gazette, an undated copy found in a Daughters of the American Revolution (DAR) scrapbook. “It was 1899 and Carile was a member of the newly formed Lycoming Chapter of the Daughters of the American Revolution. Members thought a city the size of Williamsport should have a free public library, particularly since Towanda was building one.”

Unfortunately, Carile died before the DAR’s goal was accomplished. In the two years after her death, James V. Brown devoted himself to designing the French Renaissance building, which opened on June 18, 1907, three years after his death.

Carile Cone Higgins was born on May 4, 1831, in Pike, New York. Her family later moved to nearby Wellsville, 35 miles north of Galeton. She was the second of the six daughters of Edmund Higgins and Delancy Reese Higgins. Edmund Higgins was the deputy sheriff in Wellsville.

James V. Brown trained as a printer and then joined his father in the flour milling business in Wellsville. In 1859, he moved to the growing metropolis of Williamsport and purchased the Updegraff and Herdic Flour Mill. In 1860, 33-year-old James V. Brown married 28-year-old Carile Cone Higgins. James went on to make his fortune in Williamsport in the lumber business.

“A typical Victorian lady, her house was her interest,” Baskin explained in the same newspaper article. “She often had the ladies there for lunch.”

After lunch, the women sometimes went to the Park Hotel (now Park Place) to play bridge and socialize, Baskin noted.

In Williamsport, the Browns lived in what had been the home of Michael Ross, the city founder, at the northwest corner of Third and Basin streets, now a Lycoming College parking lot. In 1874, according to an article called “Fine Improvements” in the Daily Gazette & Bulletin published on May 14, 1874, they built a mansion designed by A.S. Wagner on the same lot. The home was 58 feet wide in the front. Its central tower was five stories high. The first floor contained a vestibule, the main hall, a parlor, library and sitting rooms. The vestibule was octagonal, with niches for flowers or statuary. The hall was 11 feet wide and featured a grand set of stairs. Carile likely entertained her women friends in the parlor.

Both Carile and James were active in Christ Episcopal Church, just a few blocks from their home. While James for many years was a senior warden of the church, Carile acted as the parish hostess. In addition, she was the principal of the sewing school held at the mission church (Wadleigh Chapel) on Almond Street, where she had 40 students. The mission church also housed “a night school for colored boys and men, prevented by their work from attending schools during the day,” according to Henry Eckel in Chronicles of Christ Church Parish in 1910. After Carile’s death in 1902, her sisters presented the church with the Sanctuary Rail.

As well as being a founding member of the DAR and its second regent, Carile was a charter member of the Clio Club, a club that focused on intellectual interests and study. She and her sisters Helen and Ann were also members of the Women’s Christian Association. The Women’s Christian Association founded the Home for the Friendless on Campbell Street, a home for elderly women and needy children which evolved into the Williamsport Home. Ann Higgins Perley chaired the board of the home for 29 years.

The Browns purchased land in the resort community of Eagles Mere, and in about 1892 they built a 20-room “cottage” there. Called Corner House, it stands at the corner of Eagles Mere Avenue and Mary Street. Interestingly, county records show that the cottage was in Carile’s name alone. On her death, it passed to her husband, and on his death, it passed to her sister Helen. The cottage, which stayed in the family for many years, was recently fully restored by Mark and Lucy Stitzer. Brown’s brother, Stephen, also had a cottage in Eagles Mere, as did other prominent Williamsporters.

“Her death a great shock” read the headline in the Williamsport Sun-Gazette on Nov. 19, 1902. Carile was praised as “a woman of many lovable qualities, foremost in every movement in which her sex had an interest and noted for her charitable disposition. She was a woman of Christian character of most generous impulses, sympathetic and mindful of the needs of less fortunate.”

Her funeral, which the newspaper called beautiful and impressive, was held at Christ Church, and she is buried in the grand Brown mausoleum in Wildwood Cemetery.