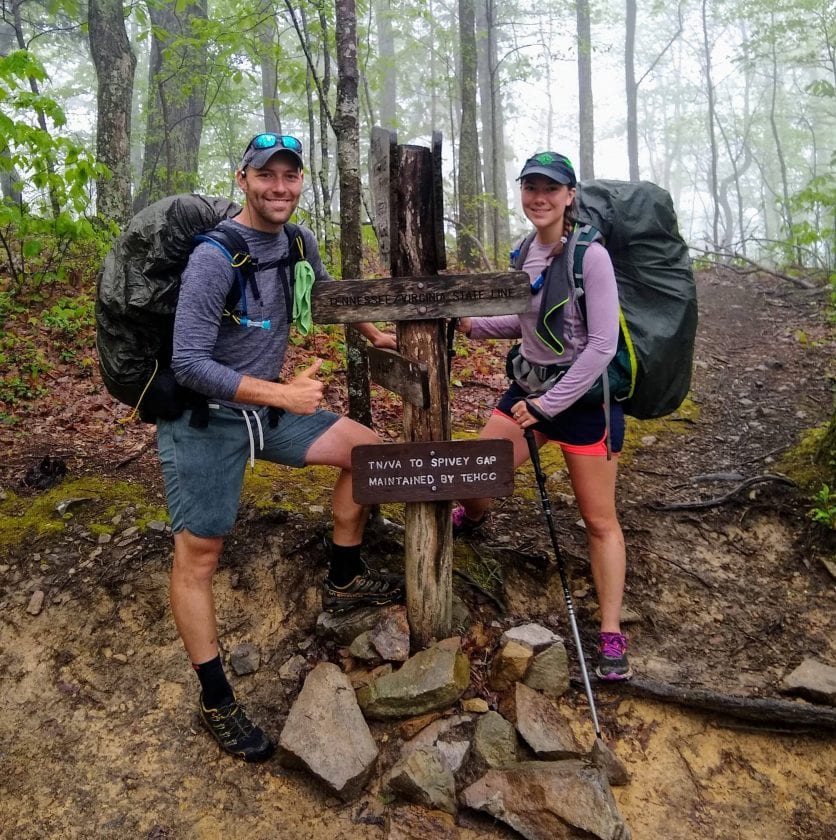 Mount Katahdin, to many, is simply the highest mountain in Maine, but to those hiking the Appalachian Trail, it is the picturesque end to their 2,200-mile journey, fraught with not only obstacles and exhaustion, but also unforgettable vista sunsets, the feeling of being one with nature and the hikers one often meets along the way.

Jesse LuBera and Erica Anderson, of Roaring Branch, and Craig Uhler, of Williamsport, are currently well into their thru-hike of the Appalachian Trail, but each of the hikers still has significant ground to cover before they can rejoice and finally rest at the summit of Mount Katahdin.

Choosing to hike the Appalachian Trail end to end is obviously not a choice taken lightly — for LuBera, who enjoys his stable life as a senior graphic designer in the signage industry, it is a break from routine.

“When life becomes routine, it is considered ordinary, (which is) doing something millions of other people have done, and that really doesn’t appeal to me,” LuBera said, “I find fulfillment in doing things that challenge me.”

“If it rains, we hike. If it’s cold, we hike a little faster,” Anderson said, who is taking on the Appalachian Trail with LuBera by her side, “When it’s hot, we hike with more breaks and take in more water and electrolytes.”

Challenges abound on the Appalachian Trail — it is person versus nature at its most extreme. Anderson and LuBera try to hike between 12 and 20 miles per day, but sometimes, those miles are extremely labored and painful.

While crossing a creek, a cut on Anderson’s foot became infected, and had swollen during the night.

“We hiked 30 very slow and painful miles to the next road crossing,” Anderson said, “I received antibiotics and was back on trail in three days.” LuBera notes the duo also had to contend with mosquitos and ticks, which can carry potentially dangerous bloodborne diseases.

“The mosquitos alone could make someone crazy, then pile on the 90-degree days and days of rain, it’s not so exciting,” Anderson said, who makes sure she and LuBera nurse their mental health to maintain motivation.

Despite having a relatively easy hike thus far, Uhler has contracted minor hypothermia and was forced to perform “trail ‘surgery,’ “ Uhler said, on himself, using a hot needle to melt and relieve pressure from his fingernail.

But the Appalachian Trail does not always hurl misfortune at those brave enough to traverse her path — a good deal of the time, the people they meet along the way help hikers forget all the pain they had to endure to reach them. Even though LuBera, Anderson and Uhler are on the Appalachian Trail for the challenge and the inevitable breathtaking vista sunset, it is the people they have encountered that have made their journeys memorable.

“The culture of the trail and the other hikers we’ve shared these places with have been my favorite elements of our thru-hike,” LuBera said.

LuBera and Anderson have met people on the Appalachian Trail from Poland, Germany, England and New Zealand, and people who are diverse socioeconomically and generationally.

“Here, doctors and professionals mingle with the unemployed. Teenagers hike alongside seniors. Homegrown Americans become fast friends with those from other nations,” LuBera said, “I have never experienced a place where class, status and race are so entirely neutral.”

For Uhler, people he meets along the Appalachian Trail become family. “My buddy Taco and Deadpool I met day one, and ended up hiking over 700 miles with them. They will be brothers for life,” Uhler said, who adds he finds a new trail family in each new state he crosses into on his journey. “We’ve met so many people that have helped us in ways I don’t even know how to thank them,” Anderson said.

Truly, anyone can undertake a thru-hike of the Appalachian Trail. LuBera notes there are many people who have never spent more than a handful of nights in the woods, who still decide to tackle a thru-hike. To quote the now-cliche adage, however, “practice makes perfect,” and that is just what LuBera and Anderson did.

“(LuBera and I) spent two to three years going on weekend backpacking trips of growing distance,” Anderson said, experimenting with different types of gear, as well as significantly rebudgeting their expenses to afford the thru-hike.

Living frugally is one of the best ways to prepare for and successfully complete a thru-hike, as they typically cost $5,000 on average. “That money is spent on food, gear replacement … laundry or the rare hotel room if we need to reset mentally,” Anderson said. “We spent several years doing all we could to set aside enough money to be able to comfortably leave our employment during our trek,” LuBera said.

Uhler also left his jobs to set out on the Appalachian Trail — he worked as a land surveyor and a bartender.

“You read lots of articles, research a ton of products and eventually just get out there and try it,” Uhler said, who shares the same sentiment with LuBera and Anderson, that there is nothing you can really do to prepare for such a feat. “Most of the time, your training is the first two weeks on the trail. If you get past that, well, I guess keep it up,” Uhler said.

The typical day for a thru-hiker on the Appalachian Trail starts with an early morning and concludes hopefully before 9 p.m., referred to by Uhler as “Hiker Midnight.” Camp is packed up, breakfast is made — for LuBera and Anderson, mealtimes are on a when-needed basis — lots of walking, wayfinding, navigating obstacles and blazes (white trail markers), taking photos, drawing, walking with fellow hikers and filtering water from springs and streams.

“We occasionally take shorter days to do chores, resupply in nearby towns, do laundry and take showers,” said LuBera.

Uhler’s days tend to include a peaceful rest around lunchtime at a scenic overlook. “Then I march on until I find my camping spot for the night,” Uhler said. Once nighttime passes, the regimented routine of an Appalachian Trail thru-hiker begins again. This is essentially life for the six months thru-hikers spend on the trail, marked by notable people, sights and experiences.

Hiking the Appalachian Trail, relying entirely on one’s mental, physical and emotional willpower and all the lessons learned along the way often forever changes those who set their sights on Mount Katahdin in Maine all the way from their starting point in Fannin County, Georgia.

“The Appalachian Trail has taught me that life is simpler than we realize,” Uhler said, “To live without is to live free.”

For Anderson, the Trail has brought her a sense of peace and acceptance.

“In some ways, I’ve learned how to let go and relax when circumstances are out of my control,” Anderson said, “The trek has renewed some faith in the world we live in and reminded me of what’s beautiful.”

Though hiking the Appalachian Trail together, Anderson’s and LuBera’s respective realizations are interestingly different — the Trail changes people in different ways, even those who are so close.

“Clothing, warmth and even sunshine are all priceless. Above all, walking into a supermarket is now an experience beyond description. It is humbling to realize how much we have at arms length at any given moment and take entirely for granted,” LuBera said.

LuBera and Anderson started their thru-hike on March 25 and anticipate to reach Mount Katahdin near Sept. 10. Uhler began March 20, hoping to finish by late August.