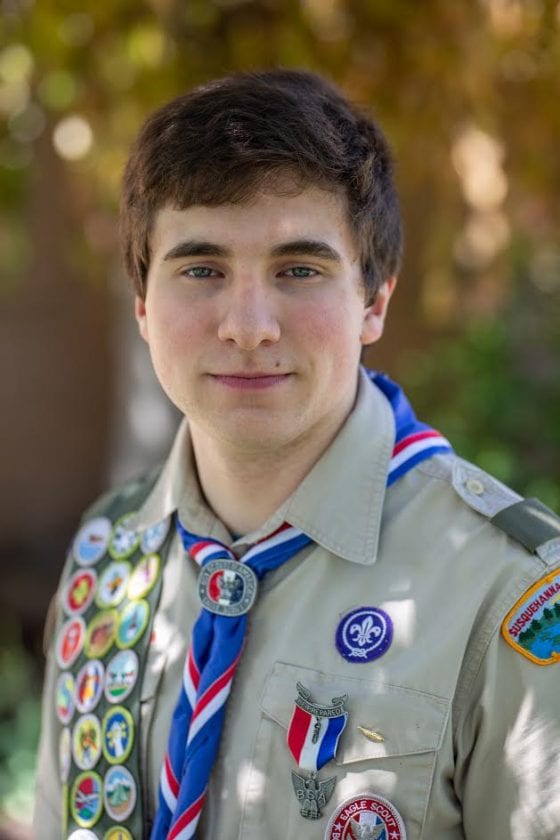 Michael Van Ess, of Loyalsock Township High School, Boy Scout Troop 38, had his Eagle Scout conferred during a Troop Court of Honor held at St. Anne’s Church in Loyalsock Township. Michael is the son of Robert and Veronica Van Ess.

Part of earning the Eagle Scout rank is the completion of the Eagle Scout Project. Michael chose to work with KidsPeace, of Williamsport, for his project. Michael created care packages to be given to foster children when they are placed into new homes. The packages included both essentials and comfort items for the kids. — washcloths, tooth brushes, journals, stuffed animals, a personal note and a t-shirt Michael designed were some of the items included. Michael put together over 60 care packages for KidsPeace and donated any extra supplies to the community.

Another part of earning the Eagle Scout rank is the completion of the required 21 merit badges. Michael has completed 33 merit badges, earning his Bronze and Gold Eagle Palms, and plans on completing more in order to earn his Silver Palm Award before his scouting is completed.

Michael began his journey in scouting with Pack 38 as a Bear Scout in 2011. From then on he worked his way to Webelo Scout and received his Arrow of Light — crossing into Troop 38 with the rank of Scout, in 2013. During his time as a Scout, Michael served his troop as patrol leader (youth leader of the troop), assistant patrol leader, librarian and troop guide (helping new scouts begin their path in scouting).

Michael was recognized by many for achieving the Eagle Scout rank. Those recognitions included awards given at his Eagle Court of Honor by The Marine Corps League and The Lycoming County Commissioners, as well as many sent to him from other organizations and government officials.