Women of Williamsport cooking in the 19th century 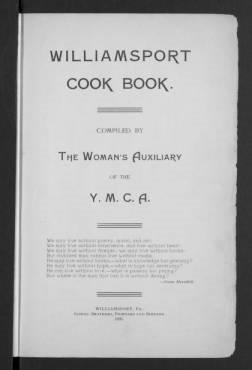 The local Ladies’ Auxiliary of the YMCA compiled a cookbook of almost 400 pages that was published locally by Scholl Brothers in 1895. The particular cookbook in the Lycoming County Women’s History Collection belonged to Ann Gage Jeeves, a local teacher, and the book includes lots of blank pages upon which she scribbled additional recipes.

Nationally, women had long supported the YMCA in numerous ways — organizing social events, furnishing and caring for rooms, attending to the sick, raising money and praying for the men. In the 1880s came the formation of the Ladies’ Auxiliaries to officially channel these activities.

An essay by James C. Humes titled “History of the Williamsport YMCA” states that the local Auxiliary was formed in 1886 “under the leadership of Mrs. J.E. Dayton, Mrs. Rhoads and Mrs. James Gibson,” who were helpful in organizing lectures and entertainment.

The cookbook was probably a fundraising project, and it was dedicated to the “Ladies of Williamsport and Vicinity” who supplied the recipes. The preface promised that the book would appeal to the “young and inexperienced housekeeper,” who would be assured of finding “tested and approved” recipes.

The table of contents lists sections for soup, fish, small cakes, large cakes and pickles, to name just a few.

There is a separate chapter on “Food for the Sick,” and the miscellaneous category includes instructions for cleaning carpets and straw hats as well as a formula for destroying cockroaches and a method for packing eggs for winter use.

Many chapters have an introduction that imparts important information and sometimes includes a poem. The soup section states that beef is the best meat for a soup because it is the most nourishing.

The vegetable section begins with a verse saying that it is time to bring out the rusty rake because it is spring and the garden needs to be made.

In the bread chapter, the cook is warned that it takes experience to bake good bread. And in the cake section, we learn to never use flour that has not been sifted, and to check for doneness by using a broom splinter.

Given oven facilities of the period, in most instances the cook is not told how long a given dish should remain in the oven or at what temperature.

At the turn of the 20th century, oysters were considered inexpensive fare, and the United States was a major producer.

A 19th-century cook approaching the holiday season might want to choose a recipe for roasting turkey that recommends choosing a turkey that is one year old or a recipe for ham that involves removing the bone and replacing it with stuffing.

For dessert, she could consider the Christmas pudding, which calls for the addition of raisins, currents, sultanas, beef suet and almonds. The mixture sits overnight before milk is added; then follows a cooking time of three hours.

‘Food for the Sick’

The chapter on food for the sick furnishes many home remedies. Panadas, a paste or gruel, can be made from barley or eggs. Koumiss, prepared from fermented milk, is recommended for those with indigestion or a weak stomach.

Toast water is said to be “better than almost anything else” for allaying thirst. The recipe for soda mint, probably used for heartburn, calls for soda, ammonia, peppermint and water: “Take one teaspoon and repeat as necessary.”

To cure pleurisy, readers are instructed to get grass sod from the yard and bake it, then place it warm on the person’s side. According to the recipe book, “This cured a patient the doctor had given up on.”

For those viewing the cookbook as a historical document, the pages of advertisements in the back are as interesting and informative as the recipes.

Although Bush and Bull Co., at 43 West Third Street, promises to “put our customer in touch with the styles and products of nearly every known country on the face of the globe,” a lady might also have shopped at L.L. Stearns and Sons for “all the new styles in cloth, fur, velvet and plush” when it came to coats and capes.

L.L. Walton and Company Apothecary, on the northeast corner of Fourth and Pine streets, wanted the shopper to know that the store was “Not drugs alone.” It carried pure spices, baking soda and flavoring extracts.

Holiday guests were invited to stay at the City Hotel, which remained open for all-night train arrivals; Porter’s Central Hotel, 303 W. Fourth St., charged $1 per day; or the Hotel Crawford, corner of Third and Mulberry streets, which charges $1.50 per day.

Through the Williamsport Cookbook we get a snapshot of what life was like in our community in 1895. This historic treasure not only tells us what people ate, but also demonstrates the basics of everyday life.

It is available in its entirety by accessing the Lycoming County Women’s History Collection, www.lycoming.edu/orgs/lcwhc.