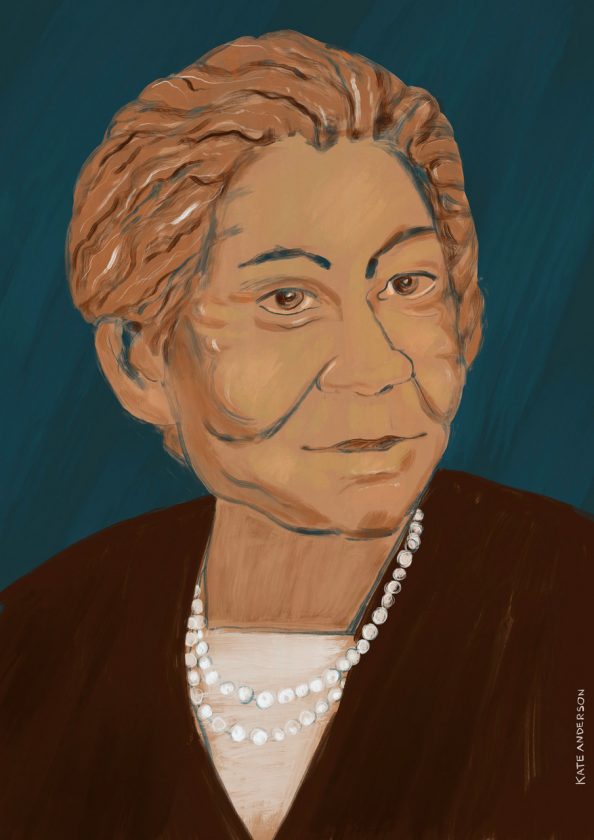 There were many other notable African American women in Lycoming County. Those featured here are a small sampling.

“Aunt” Jane Ross was reportedly 108 when she was interviewed by the Gazette and Bulletin in August 1873 for a series entitled “Among the Old Folks: Those Who Know of the Colonial Times.” Her master, Mr. Weatherhead, had set her free in Delaware when she was quite young, and she had made her way to Muncy and then Williamsport.

Among her many stories is that she served in a home where George Washington was dining and “when I handed him corn bread at the table, he said ‘thank you’ so pretty.”

She must have made quite an impression in Williamsport. At the Lycoming County Centennial celebration in July 1895, her life-size portrait stood among those of other Lycoming County notables. Unfortunately, that portrait has been lost.

Mary Slaughter settled in Williamsport in 1866, after the Civil War. She, her husband and children had been slaves on the Myers Plantation in Martinsburg, West Virginia. She is best known for her philanthropy. She opened her home on Walnut Street to needy women and children, and in 1897 she established a new larger facility on Brandon Place, the Home for Aged Colored Women.

Slaughter was a woman of action. Although she could not read, she traveled to Harrisburg and solicited and was awarded state funding for the home. Much of the day-to-day work she did herself:

“She cares for them all, looks after the furnace, cooks the meals, sees that they are dressed and ready to receive their friends,” wrote journalist Dorothy Deane in a 1923 Sun-Gazette article.

The Mary Slaughter Apartments on Brandon Place in Williamsport are located where the original Home for Aged Colored Women stood.

One of the slaves they assisted was a young Virginia man named Joseph Pascal Thompson, who most likely lived with the Gilchrist family. Although Thompson could not read or write when he arrived, he soon started night school and also learned blacksmithing. He went on to become a licensed preacher in 1839, physician in 1858 and a bishop in the African Methodist Episcopal Zion Church in 1876.

In 1841, Rev. Thompson and Catherine Gilchrist were married in Williamsport. As a married couple, they continued to work with the Underground Railroad in New Jersey and New York. Bishop J.W. Hood wrote of Catherine, “During the dark days of slavery her mind was riveted on allaying the suffering of her unfortunate fellow-creatures. Many clever schemes she devised in effecting their escape from bondage,” as published in “One Hundred Years of the African Methodist Episcopal Zion Church,” 1895.

Now nationally known as the author of the first published novel by an African American woman, entitled “The Curse of Caste, or the Slave Bride,” Julia C. Collins was writing that novel in 1865 while she was serving as the teacher for the African American children in Williamsport. Her contribution is acknowledged by a Pennsylvania Historical Marker installed in June 2010 on the Riverwalk in Williamsport.

In 1865, there was no public school building open to African American children, so she would have taught classes at her home or church. At the time, Collins was living with her mother-in-law on Mill Street, while her husband, Stephen, was serving with Colored Troops in the Civil War. In addition to writing weekly installments of her novel for “The Christian Recorder,” she was raising two children and was ill with tuberculosis. The disease claimed her life before the final installments could be written.

Even after a decade of research, scholars are not sure of her name at birth, where or when she was born, or whether she was born enslaved or free. Extensive research has identified one of her granddaughters, Ethel May Caution.

In 1909, Lila Fisher was hired to teach black students in Williamsport. A teacher in her native state, North Carolina, Fisher moved here with her family when her father was appointed pastor of the A.M.E. Zion Church.

Fisher taught in Williamsport schools for 40 years and was beloved by her students. At the time of her retirement, “Miss Lila,” as she was known to her students, was teaching black students in grades one through three in a single classroom at the former Transeau School. The year of her retirement, 1949, marked the end of official segregation in Williamsport public schools.

Ethel May Caution was born in Williamsport. Although she most likely was not aware of it, her grandmother was Julia C. Collins. Like her grandmother, Caution was an author. Her poems, stories and essays were published in national magazines including The Crisis, the magazine of the National Association for the Advancement of Colored People (NAACP), founded by W.E.B. DuBois. Her work is part of the Harlem Renaissance, an intellectual, social and artistic movement centered in New York City in the 1920s.

Caution’s parents, Anne Collins Caution and John Collins, both died when she was very young. An uncle took her and her siblings from Williamsport to Massachusetts, where she was adopted. Caution broke many racial barriers, including being only the second African American woman to attend Wellesley College. In addition to being a writer, she was a college dean, social worker and YWCA director. Caution traveled to Williamsport several times in an attempt to locate the family she had left behind and to visit the graves of her parents in Wildwood Cemetery.

Margaret Hagan was the most flamboyant of the local women featured in the Lycoming County Women series. The daughter of an “Arab” from Madagascar and the granddaughter of a former slave and a Supreme Court Justice, she came to Williamsport with her husband in the 1860s. She lived in Williamsport for 50 years. An entrepreneur, Hagan owned and operated two businesses on East Third Street: Star Laundry, which also sold ladies’ furnishings, and The Electric Baths, a 17-room spa where she administered electrotherapy, a very popular treatment for many ailments. She boasted that she served the “best families” in Williamsport and followed some of them to Eagles Mere in the summer.

Her daughter, Fannie, an honor-roll student, left Williamsport in 1871 to study in the preparatory department of Howard University in Washington, D.C. Two years later, Fannie married one of her professors, James Monroe Gregory, in the rectory of Christ Church in Williamsport.

The Gregory family and their descendants have had a powerful and continuing influence on education of African Americans in the United States.

A 20th-century civic leader, Isabella Fairfax had a notable impact on her community.

“Her death removes a prominent Negro civic leader from our midst,” as published in the Williamsport Sun-Gazette when she died.

Her family moved to Williamsport from Pittsburgh about 1885 when her father, Rev. John Russell, was appointed pastor of Bethel A.M.E. Church. Isabella graduated from Williamsport High School in 1897, one of the first African American graduates.

Isabella married John W. Fairfax, and in 1904 the couple were appointed caretakers for the Masonic Temple. They lived there for 40 years.

President of the Walnut Street, or “Colored” YWCA in 1919, when that branch closed, Isabella Fairfax continued to be involved in the Bethune-Douglass Center that replaced it. She served on a city committee studying interracial relations in the 1920s, and in the 1930s she was on the county relief board.

She fought discrimination wherever she saw it and likely was among the group of concerned citizens who approached Williamsport Mayor Wolfe in 1936 to insist that the road infamously named “N***** Hollow” be renamed. It is now Freedom Road, celebrating the Underground Railroad active on that road for decades.

Whether they were confronting adversity in their own lives, working to improve the lot of those less fortunate than themselves, or focused on helping the next generation to succeed, what all these women had in common was a remarkable resilience, which served them — and Lycoming County — well.

— Lycoming County Women, by Mary Sieminski and Janet Hurlbert, is a monthly column published on the second Sunday of each month in the Williamsport Sun-Gazette’s Lifestyle section and is part of the Lycoming County Women’s History Project. Sieminski is the former director of the Pennsylvania College of Technology Library. Hurlbert if Professor Emeritus of Library Services at Lycoming College. For more information, email life@sungazette.com.