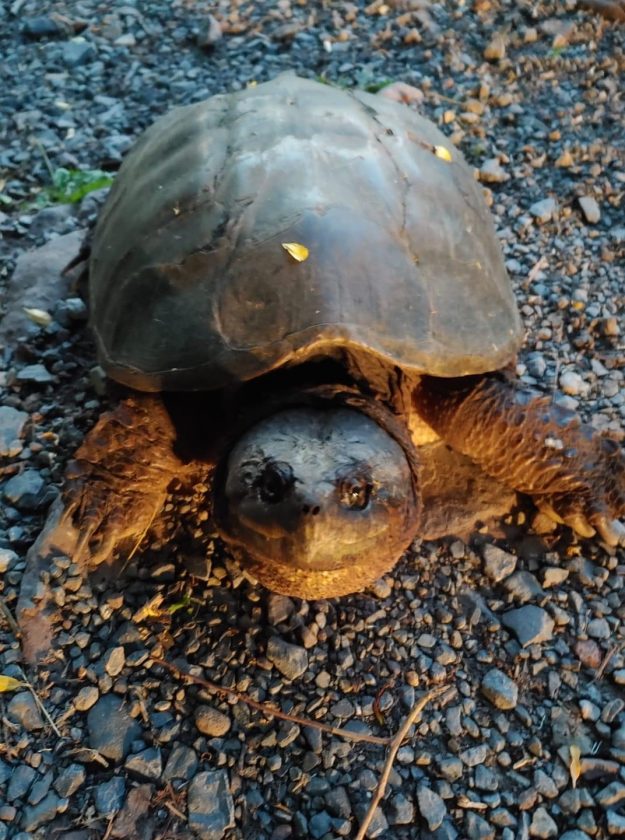 Dear Walter, I enjoy taking myself on long, private walks in the woods to sniff things and refresh my natural, houndy essence. My people don’t approve, but they also haven’t fixed the gate. On one of my recent adventures, I found this awesomely stinky … thing. It looked like a big rock, probably twice the size of my dinner bowl, hard and round and bumpy. Then, the rock HISSED and MOVED! I was kinda startled (and I may have yipped and even peed a little.) Seriously, this dank-smelling rock had a FACE sticking out of it with a strange, pointy mouth. It had these weird, stumpy legs with long, ugly claws on the ends, too. And get this: IT TRIED TO BITE ME! It was toothless, but its jaws actually made a snapping noise nearly chomping my precious, button nose. True story.

I barked at it a bunch of times, but it snapped again, so I decided to go get help. I ran all the way home, which was a mistake, ’cause I had to endure another bath (cucumber-melon this time, ugh.) When I checked the next day, the thing was gone. My nose was all kaflooey with the gross shampoo smell, so I had trouble tracking that monster, but I’m pretty sure it’s still out there. Should I be worried? It was big! Will it come get us all in our sleep? I now have dreams about rocks that can walk and bite — it’s terrifying!

Dear Snaps, I’ve had a similar experience with a smaller version of the creature you met in the woods. It’s called a turtle. I say this from experience: Avoid sticking your nose into a turtle’s open mouth. Turtles don’t have teeth, but they do have a sharp beak, and can bite VERY HARD. It hurts. Any dachshund worth his salt has scars to mark fierce battles. My most noticeable scar is on the end of my nose — from my encounter with the turtle they call “Jenny.” It happened fast, and was over just as quickly, since my people swooped in to intervene. I’ve never been given the opportunity to settle the score, so I still hold a grudge against that foul beast that lurks in the watery, glass box. If only I were taller, I know it fears me, as it has never tried to escape. I am ever vigilant.

Other than the bitey end, turtles are pretty harmless. They have leathery feet, sometimes with long toenails for digging and paddling in water, but they can pull their stumpy legs and tail into their hard shells and tuck their faces inside, too, which makes them pretty tough to kill or eat.

They tell me what you found in the woods was probably a snapping turtle, given the size and ferocity you describe. A bit of friendly advice: Don’t pursue it. Snapping turtles keep to themselves, and steer clear of people and dogs, but can inflict a painful bite, if threatened, so — don’t. It will not come after you or your family, so sleep well, my friend.

Dear Walter, I’m a fierce hunter and accomplished scavenger and have sampled a variety of small creatures (birds, squirrels, bunnies, worms and even a couple of rats) in my 13 years of patrolling our backyard. I am longing to try something exotic, and there’s this tortoise that lives in our house that intrigues me. He’s never threatened us, is always quiet and the most he ever does is eat green things and sit like a lump in his water dish. Eating vegetables and being unable to make any appreciable noises seems like a pointless existence. Eating him would be a particular challenge, but I’m sure he would be crunchy on the outside and chewy on the inside. Probably tastes like chicken. What do you think?

Dear Craving, I’ve never tasted tortoise, but it would be an interesting challenge. Given my experience with the business end of a turtle, I’d advise starting at the tail end, to be safe. In my home, attacking, killing and eating housemates is frowned upon, in general, so it may be best to stick to conventional fare.

Dear Walter, The teen girl is afraid of moths. Moths are not scary. The 3-inch long hornet in her room the other day was the stuff of nightmares. That is all.

Dear Tabby, While that insect had no business BEEing there, you should definitely let it BEE. (See what I did there?) Hornets can deliver vicious stings that can cause serious allergic reactions. Being afraid of them is only natural. They’re mean. Peace out, think calm thoughts and get your people to handle that one.

— Daverio is a veterinarian at Williamsport West Veterinary Hospital. Her column is published every other Saturday in the Lifestyle section.