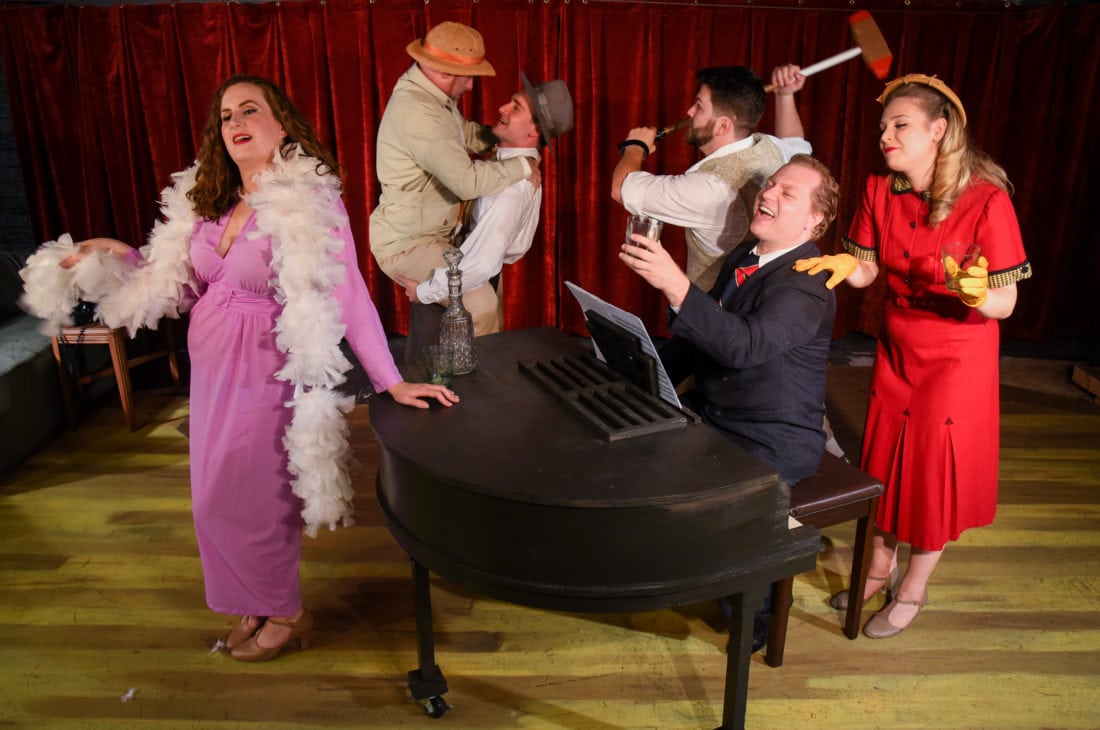 PHOTO PROVIDED In this photo taken by Bill Crowell, actors of the Millbrook Playhouse show off some characters from “Footlight Frenzy,” which is currently playing.

MILL HALL — If the inept acting troupe in “Footlight Frenzy” sends out a S.O.S., it means “Save Our School.” But when Millbrook Pl­ayhouse, 258 Country Club Lane, sends one out to this production, its S.O.S. means “Simply Overly Silly.”

But don’t moan, this is one of this farce’s most redeeming values.

The farcical “Footlight Frenzy” is Millbrook Playhouse’s current production, with 7:30 p.m. performances tonight, tomorrow and Saturday, with a 2 p.m. matinee on Sunday in the downstairs Cabaret.

Regular Cabaret patrons will hardly recognize the stage, which as been extended on either side to depict the backstage where the cast of the loony “Tarnished Silver” benefit show is about to be performed or self-destruct.

In a desperate attempt to save the floundering “School for Unusual Children,” a PTA group mounts an ambitious play, and as sometimes happens in farces, everything that can go wrong does go wrong. Big time!

“Footlight Frenzy,” despite not be a musical, has “Music by” and a “Choreographer” credited in the program. That’s because the small cast ripping and tearing back forth with their frantic movements resembling dancing features a bit of singing and a little jazz incorporated into the loony script.

It’s a “show within a show” that gives the Millbook audience a peek from the back of the stage, peering out towards the (imaginery) audience, which happens to include producer David Merrick.

Adding to the early chaos is two would-be actors calling in to tell the frazzled director, who also penned ” Tarnished Silver,” that they’re not showing up. The answer: having the role of the tough criminal Johnny Chicago now played by the janitor, while the accommodating butler is also replaced — by a telephone.

Although “Tarnished Silver” is written as a tragedy in “four searing acts,” “Footlight Frenzy” is presented by Millbrook’s talented cast in two acts, with a running time of slightly more than 90 minutes.

Though set in the present, there is a funny, off-handed remark about 1930 — or just a few years before the outbreak of WWII.

The zaniest performance is Galen Monk’s school janitor Benny, who after initial reluctance, eagerly assumes his role as Johnny Chicago.

Working up a sweat literally and figuratively is David M. Farrington, as Tony Langdon, the has-been playwright, whose hysterical direction turns the show into a shambles.

The couple, whose divorce is off-again, on-again during the show’s opening night performance are the Beckers. James Cougar Canfiled plays Paul, who tinkles on the piano, with Georgia Fender — seen earlier in the Cabaret’ s “Savannah Sipping Society” and “The Marvelous Wonderettes” — playing his wife Laura.

Christopher David Roche, most interested in his after-show date, plays Alex, with Kirstena Walz, as Debbie, who wonders how she can play her big love scene with a telephone.

The audience howls often at the troupe’s tribulations, and especially when an actor slithers across from one side of the backstage to the other.

Unlike anything previously presented at the Cabaret, ” Footlight Frenzy” is a slapstick farce that not only tickles everyone’s funny bone, but may fracture a few as well.