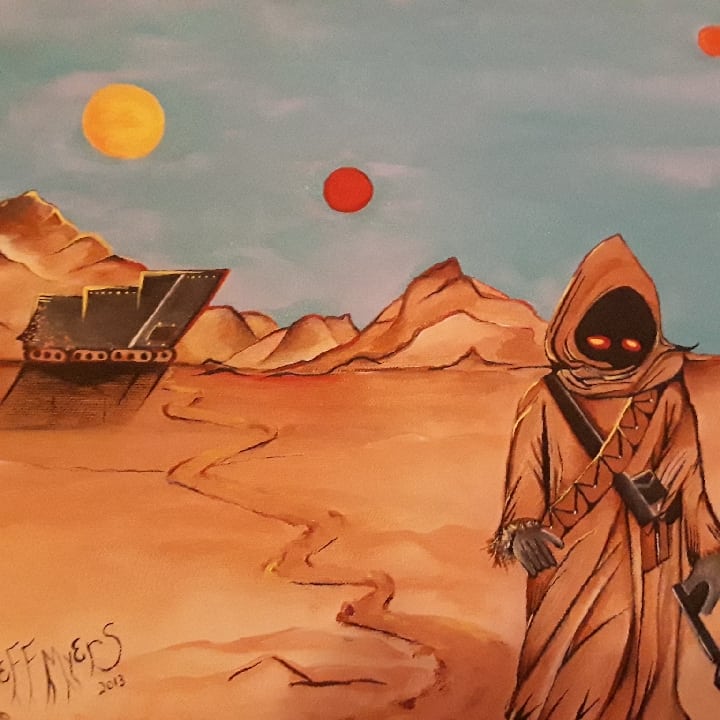 When Hughesville-based artist Jeff Myers sits down with a blank canvas in front of him, there is no telling exactly what is going to end up on it. Some days the result is a goblin or a robot or a monster; other times it’s a castle or a wildlife scene or a self-portrait. Simply put, Myers’ artwork goes wherever his instincts take him on any given day, and his subject matter is constantly changing.

For Myers, the love for creating art was cultivated at a young age, and has developed into a rewarding lifelong hobby.

“I would say that my interest in art originated with my school art teachers,” Myers said. “Seeing what they were capable of inspired me at a young age.

“My elementary school art teacher kind of kicked it off for me, then from there it was just a progression through school,” he added. “As the art teachers progressed, I kind of progressed with them in some manner.”

Myers cited Lynn Stola, Steve Buggy and Rick Mahonski as being the art teachers that had the most profound impact on his work.

Since graduating from Hughesville High School in 2007, Myers hasn’t pursued any further formal artistic training, but has continued following his passion by setting aside many hours each week to refining his craft. Though following the instruction of his teachers helped him a lot in school, he said it is liberating to now create works that no longer follow a lesson plan.

“After school, the love was still there and art gave me an opportunity to socialize with good friends and spend time doing the same thing — venting and brainstorming — but with friends while doing art. It also showed that my talent was progressing slowly,” he said. “It is just a good thing to do socially, mentally, physically and it is rewarding to see any kind of progression. It is fun to progress with friends.”

Though his works vary from the realistic to the abstract, and he is often switching between mediums depending on the project he is working on, many of Myers’ pieces take on an abject tone by virtue of the subjects he chooses to portray. Though he occasionally takes time to paint or draw beautiful things, like flowers, bumblebees and fish, he often prefers to take his artwork to a darker place.

“I kind of lean towards the abstract, sci-fi faces and anatomy because it isn’t necessarily pretty, and it isn’t common,” he said. “It is just kind of showing a (weird) frame in time — a frown, a spooky face with missing teeth, a growl, jaws open with blood dripping. Those are kind of an oddity and offer a very small window into the world, and that is kind of where I like to stay.

“I live in a world where it is okay to paint grotesque, dark things or sci-fi, futuristic things,” added Myers. “I live in that in hopes that maybe these things will become bigger and more common.”

In particular, Myers likes to create portraits, because faces are what most people generally focus on as they go through their day-to-day lives.

“I like to hone in on faces because the rest of the human anatomy is mostly covered (by clothes),” Myers said. “When you walk around, you don’t usually spend your time focusing on people’s chest, legs and feet. I mean, all legs in denim kind of look the same; but faces have infinite expressions, and my goal is to capture as many facial expressions as possible.”

Though he occassionaly paints with oils, the preferred medium for Myers is acrylic paint, because of how quickly it dries. He also has worked extensively with charcoals and fine graphite pencils when doing his sketches.

Myers said that sometimes he will spend just a few hours on one of his creations, if he feels that things aren’t going in the direction he originally intended. In those cases, he will set the project aside, often times for months, before going back to finish it up. But when a project is going as he planned it to, he spends anywhere from 30 to 40 hours working on it over the course of several weeks.

“If I find that something is a little bit better than what I expected, then I kind of make that conscious decision to invest more time in it because it is coming out good,” he said.

Over recent months, Myers has been involved with a group exhibition in Bloomsburg and also had some of his works on display in Williamsport at Patinaz, 38 West Fourth St. He has aspirations of getting his work out on the street during an upcoming First Friday, and also hopes to get in more galleries throughout the area.

But no matter what happens next for Myers, one thing is for sure — he will keep pushing out new creations on a regular basis.

“Through my life, art has become more of a time to think,” he said. “It is a good time to just relax and plan life’s next move accordingly.”

For more information on his art, check out Myers’ pages on Facebook.com and Patreon.com.