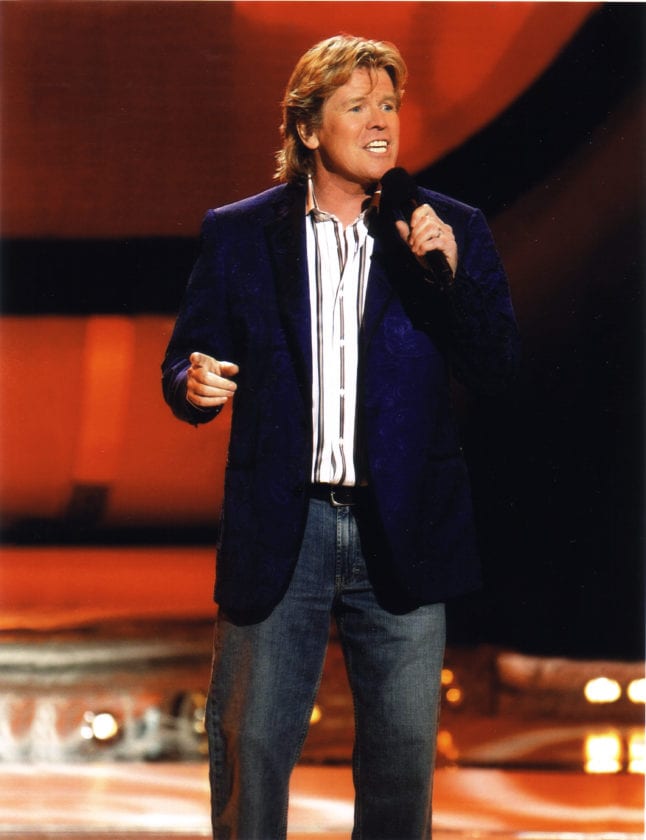 Specifically, the British beat rock band Herman’s Hermits starring Peter Noone are coming. The band, which became massively popular in the mid-1960s during the height of the cultural phenomenon known as the British Rock Invasion with hits like “I’m into Something Good,” is set for a concert at 7:30 p.m. Dec. 14 at the Williamsport Scottish Rite, 348 Market Street.

As an added treat for concertgoers, the show will be opened by students of the Uptown Music Collective, who will keep with the British rock theme by performing “A Tribute to the Beatles.”

Dave Whitnack, owner of the independent booking agency RockBlue Concerts, helped pull the show together and is extremely excited to be bringing Herman’s Hermits to the city. Whitnack said that, because British rock “transcends generations,” he looks forward to seeing a very diverse audience enjoying the show.

“We live in a diverse area where people have all kinds of different likes and it’s our goal at RockBlue Concerts to find out what Central PA wants and to work hard to meet their needs,” said Whitnack.

Having Uptown Music Collective students open the show for the Hermits was a no-brainer for Whitnack, who was first introduced to the area’s premier non-profit school of music 12 years ago when he was Technical Director at the Community Arts Center and has since worked as a member of UMC’s Board of Directors.

“I saw the magic in this organization from my very first show with them,” Whitnack said. “In hearing that first note, I knew instantly that our community was about to watch something great happen and there was no stopping it–similar to the British Rock Invasion itself.

“Like a finely-tuned rock ensemble, the staff, the students and their parents all work together to take it to the next level,” he added. “It takes a team of great, outside-the-box thinkers to keep something as good as Uptown going.”

Whitnack said that it is important for him to help give area musicians an opportunity to perform at big local events, like the upcoming Herman’s Hermits show, because he wants to, “stay true to the roots of our hardworking local artists and possibly help them become the next rising star.”

When he first pitched the idea of UMC students opening for the Herman’s Hermits concert, Peter Noone’s agent was intrigued by the confidence Whitnack had in the organization.

“We of course referenced Uptown’s website and sent many YouTube links for review,” said Whitnack. “Just days later, the agency called and said it was a go.

“Honestly, if you’ve seen an Uptown show live or have just reviewed any of the videos of their live shows, the greatness of the whole thing hits you right away.”

Noone was so impressed by the students at UMC that he not only gave the “okay” for them to open the show, but also requested that the Uptown bandmembers join him on stage to perform a song.

“The students involved are very excited to have the opportunity to open the show and for the opportunity to possibly join Peter Noone onstage,” said UMC Executive Director Dave Brumbaugh. “Each student taking part is a seasoned member of the Uptown Music Collective’s Special Performance Group, so they all have extensive stage experience. But there is nothing like sharing a stage with a living legend.

“Moments like those are once-in-a-lifetime thrills,” added Brumbaugh. “Nearly all of the students taking part also were part of the group that shared the stage with Bret Michaels when he was here two years ago. Like that experience, this one will stay with them for the rest of their lives.”

Most of the students who will be performing at the concert are each designated as “first chair” of their respective instruments, meaning they have each scored the highest in UMC’s yearly auditions. Being first chair also puts those students in charge of leading the others at UMC who share their instrument.

The group of first chairs who will open for Herman’s Hermits includes Tate Berkey, on drums; Cade Palmatier, on guitar; Shayne Williams, on bass and vocals; and last year’s first chair guitarist David Chubirka. Vocalists Isabella Cole and Cecilia Lutz will also be featured in the performance.

Brumbaugh said that the decision to play a Beatles-themed set was an easy one for UMC because the music worked well with the sound that Herman’s Hermits will bring to the stage.

“The Beatles are still very popular among our students, and most took part in the Collective’s ‘Sgt Peppers’ tribute a number of years ago,” Brumbaugh said. “Although the music for this will be a little older than the music from that album, they have a lot of familiarity with the Beatles’ style.

“However, most of the songs will be learned specifically for this performance,” he added.

Brumbaugh said that the entire UMC organization is honored to have been asked to take part in the performance, and that experiences like this are the best way to help educate his students.

“We are excited to be able to give our students this special experience,” he said. “I’d like to send out a special thank you to the concert’s organizers for believing in our kids enough to give them this opportunity.”

Tickets to the event can be purchased at www.rockblueconcerts.com, www.williamsportscottishrite.org and by calling 570-323-6194; or in person at Robert M. Sides Family Music Center and at the box office on the day of the show.