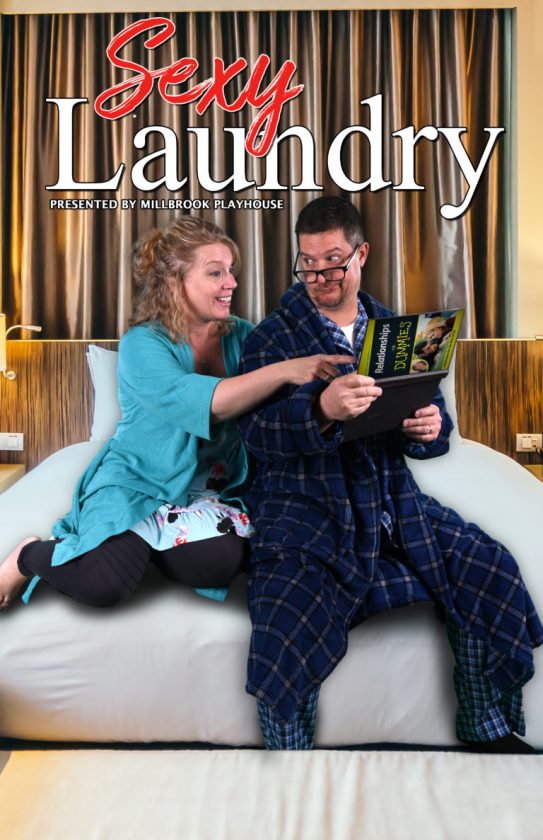 MILL HALL — There’s neither a washer nor a dryer to be found in this laundry. But this is no ordinary laundry–it’s a “Sexy Laundry.”

Millbrook Playhouse kicks off its four-show cabaret lineup by presenting “Sexy Laundry’ with 7:30 p.m. performances tomorrow, Friday and Saturday, and June 19-22, with 2 p.m. matinees on June 16 and June 23.

Perhaps playwright Michelle Rimi’s romantic comedy might be more aptly titled “Sexy Lingerie” (rather than “Sexy Laundry”) because that’s what the wife brings along to spark the ambers of her husband’s passion in her planned secluded weekend together.

Armed with a copy of “Sex for Dummies,” Alice is determined to revive what she sees as her husband’s sagging interest in their marriage. Henry, however, doesn’t believe their marriage is in a rut and is content to remain simply a continuing source of strength and stability.

Set in a swanky hotel room, Alice and Henry exchange groans, gripes and a few grievances as they look upon this getaway from different perspectives.

Morgan Sills, having directed at Millbrook in previous summers, brings a light touch as he returns to the director’s chair for “Sexy Laundry.”

The two-person cast consists of Elizabeth Simmons as Alice, and Michael Maloney as Henry.

Although the middle-aged couple has hit a plateau after 25 years of marriage, Millbrook’s version — in a wise nod towards their actors’ actual ages — has Alice and Henry married for 15 years.

With a running time of approximately 90 minutes (with one intermission), “Sexy Laundry” has a few serious moments, but mainly highly hilarious ones, as Alice sets out to seduce her engineer husband, thereby unearthing her inner vixen.

From the show’s popularity, it’s apparent that the dialogue is sharp and witty, with a bit of physical comedy thrown in for additional laughs.

The howls of laughter probably come mainly from the couple’s misadventures at sexcapades. But audiences — especially married couples — will also chuckle, nod or nudge each other in recognition at some of the all too familiar incidents from their own lives.