‘The Fox on the Fairway’ comes to Millbrook cabaret 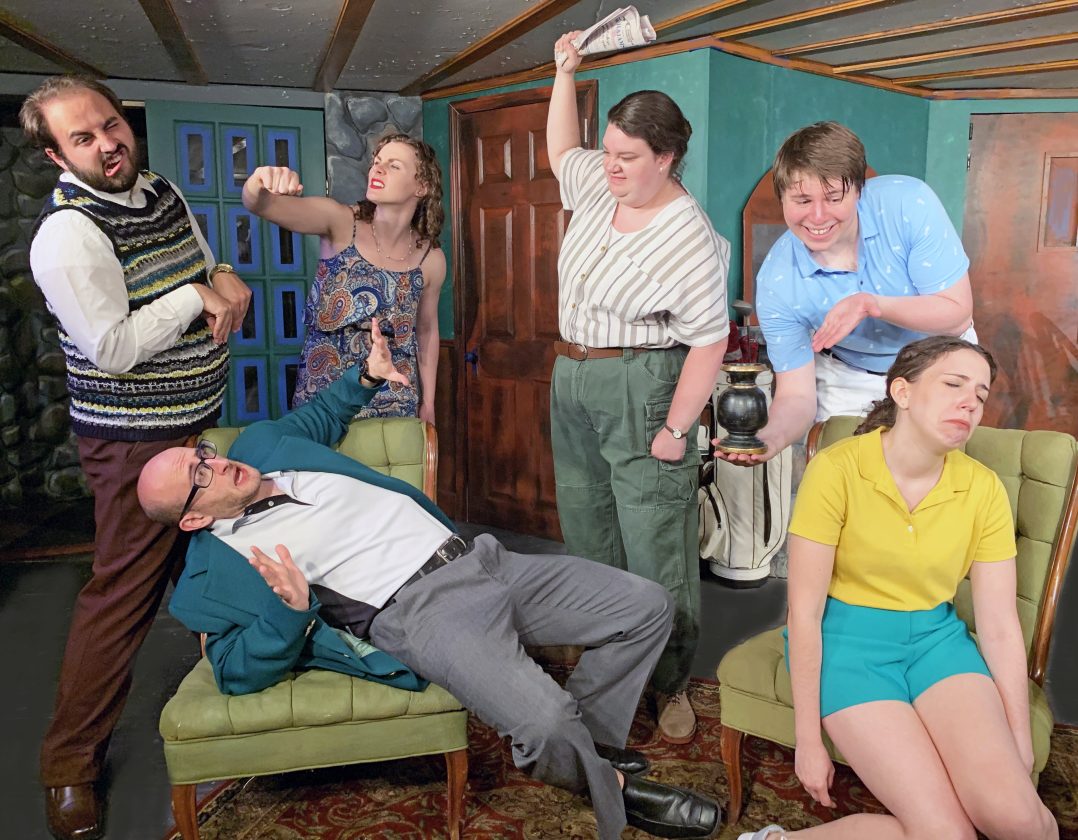 MILL HALL — Millbrook Playhouse’s next show in a line of entertaining productions scheduled for its 56th season is a hilarious farce by the incomparable Ken Ludwig, “The Fox on the Fairway.” The show will run from tomorrow through July 14 in the Poorman Cabaret Theatre, 258 Country Club Lane.

A tribute from Ken Ludwig (“Lend Me A Tenor,” “Comedy of Tenor,” “Leading Ladies,” and “Baskerville”) to the great English farces of the 1930s and 1940s, “The Fox on the Fairway” takes audiences on a hilarious romp, which pulls the rug out from underneath the stuffy denizens of the private Quail Valley Country Club. Filled with mistaken identities, slamming doors, and over-the-top romantic shenanigans, it’s a furiously paced comedy that recalls the Marx Brothers’ classics. It’s a charmingly madcap adventure about love, life and man’s eternal love affair with golf.

Directing the Millbrook Playhouse production will be Aaron White, who, for the last four summers, has been working with the Community Arts Center with their Student Summer Stock.

“I’m really excited to collaborate with these incredibly generous and talented, professional actors,” he said.

The comedy focuses on the Quail Valley Country Club and its president, Mr. Henry Bingham, who is in a difficult position, as the annual grudge match against the Club’s rival is only a few days away. Bingham has just discovered that the golfer he thought would play for his club has switched sides, recruited by his counterpart and opponent, the arrogant Dickie. On the line is a huge bet Bingham foolishly wagered with Dickie. Fortunately, he discovers that his newly hired hand Justin, who is in love with Louise the waitress at the clubhouse, is actually quite a good golfer and finagles his nomination into the country club.

Jed Krivisky is cast in the role of Bingham, a no-nonsense type who takes pride in what he does.

“It is a Herculean task to get him to relax because of the pressure he feels to do his job and the standards he wants to uphold for his club,” Krivisky said. “He instigates a big wager for the Inter-club Tournament, believing he already has victory secured over his rival Dickie Bell. Much of the ensuing chaos and principal action revolves around Bingham and his frantic efforts to save his job, his reputation, and his well-being with his wife!”

Tim Vasey plays Justin Hicks, an eager and nervous young man who’s just been hired by Bingham to be his new personal assistant. Justin is well-intentioned, yet somewhat naive, and it’s discovered early in the play that Justin is also quite good at golf.

“When Mr. Bingham discovers that Quail Valley’s star golfer is suddenly playing for their rival club, Justin is called upon to step in and play for Quail Valley the tournament,” Vasey said. “As the play continues, Justin struggles to keep his golf game up to par while subsequently balancing his life as a newly engaged man to his fiance, Louise.”

“While she may not be the brightest one in the bunch, she’s filled with love for golf, her boyfriend, and Ancient Greek literature,” Ghorashy said. “Louise is a very passionate person but, you definitely don’t want to cross her bad side.”

In addition, the cast includes Josh Beasley (as Dickie), Melody Ladd (as Pamela), and Margaret Warrington (as Muriel).

White believes it is a curious thing working on a play such as this in the current social climate.

“With social justice movements like #metoo in the ether, there is a valid pressure — particularly in the theatre community — to build theatrical experiences that promote mutual respect and doesn’t reinforce behavior that marginalizes folk,” he said. “‘Fox on the Fairway’ is written in the tradition of farces where female sexuality can be objectified to move the plot forward.”

Krivisky was born and raised in Ossining, New York, and went to school for theatre at Massachusetts College of Liberal Arts. Krivisky has been a working actor since graduation and in 2016 moved to Philadelphia, where he has since been acting in and around the greater area.

Vasey grew up in Lewisburg and graduated from Lycoming College with a degree in Film and Video Arts and a minor in Music in 2016. He has been involved with theatre since high school, having performed in school productions as well as helping backstage. Following college, Vasey continued performing in several community theatre productions across Central PA. He has also worked as an entertainer at Knoebels Amusement Resort and performed in two shows with the National Historic Theater in Mifflinburg. This is Vasey’s first experience working at Millbrook Playhouse.

Born and raised in Houston, Texas, Ghorashy graduated from Nebraska Wesleyan University with a B.F.A in Acting. She has been living in New York City for over four years, having performed with the Hudson Shakespeare Company and in various new works at the New York Theatre Festival and Midtown International Theatre Festival. This is Ghorashy’s first time working at Millbrook Playhouse.

White points out that “The Fox on the Fairway” is PG-13 and has fun with adult topics.

“The cast and I felt a strong obligation to put the female characters on an equal playing field,” he said. We sought out choices that offered the women in the play agency and mutual desire when it comes to physical attraction and motivation. All this to say, I think we’ve crafted an incredibly funny play that will allow our audience to laugh at all the foibles of people when their hearts and their wallets are on the line.”

“Physical comedy is a muscle that constantly needs to be exercised, and I’ll never know if I get it just right, which is part of the stress as well as the fun in creating,” Krivisky said. “This cast, crew, and director have put in a ton of workout sessions, and I just want us all to go out there, laugh as much as the audience, and swing for the green.”

Ghorashy believes that what makes “Fox on the Fairway” so unique compared to other farces is the subject of golf at its core.

While there are many comedic movies about sports, there aren’t many stage plays centered, in a comical setting, around sports,” she said. “‘Fox’ also differs from others because while it is set up like a classic farce, there are many modern components added to help reach the audience’s various senses of humor.”

“Golf is a bit of a niche market,” Krivisky said. “Sure, there are serious fans, but I always thought of it as a stuffy game played by and for stuffy people. And the sport’s fashion sense is borderline ridiculous. All of these elements make perfect sense in a play like this. We get to make fun of golf and country clubs in a way that people are going to keep chuckling about later on, regardless of their connection to the lifestyle.”

Vasey thinks one of the takeaways from this play is how one can always make the best of a bad situation.

“Life isn’t perfect, and it won’t always go your way, but solutions to some of the most outrageous problems can be found if we put our heads together,” he said.

“Golf and romance are very difficult, and seldom do they go right on the first try,” Krivisky said. “But for both, hopefully victory is snatched from the hilarious jaws of defeat.”

Ghorashy and the cast hopes the audience has a good time and leaves with lots of laughs.

“Each of us love making others laugh and we hope we can give the audience two hours out of their day to let them sit back, laugh, and enjoy watching some silly chaos onstage,” she said. “We hope the audience brings any sports fans, especially golfers, and anyone who loves a good comedy.”