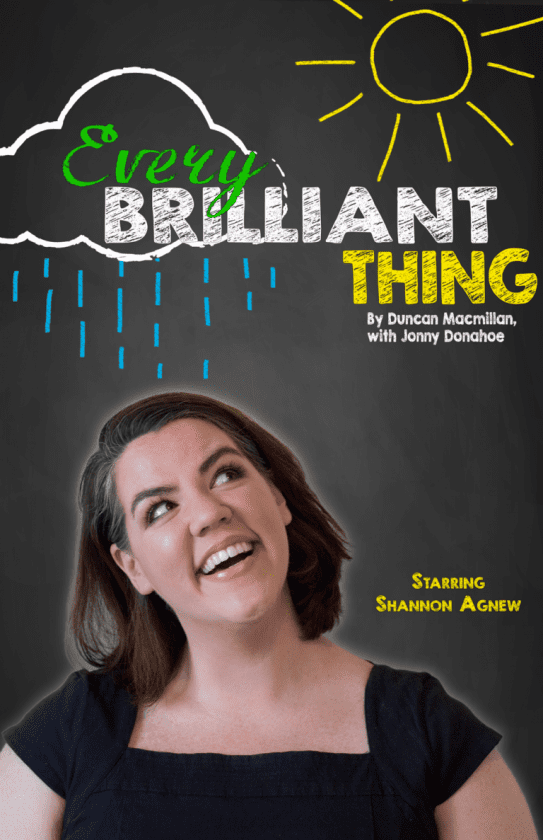 MILL HALL — It’s not totally suprising that ice cream tops the list of “Every Brilliant Thing” one inquisitive youngster can think of.

“Every Brilliant Thing” is an unconventional show, as it is both a solo program and an interactive offering. To top off its uniqueness, the production is directed by David Leidholdt, Millbrook’s artistic director, and stars Shannon Agnew.

Agnew, a freelance writer, director and performer currently serving as artistic associate of Millbrook Playhouse, wowed audiences earlier this summer with her direction of “Mamma Mia.”

In the play, a youngster scribbles lists of little things that make life worth living. These lists are passed onto his mother recovering in the hospital after a suicide attempt.

The playwrights have made the youngster (only referred to as the Narrator) gender neutral. So, Agnew is a solid choice to play the 6-year-old, who keeps adding to a list of little things which she hopes will give her mother hope and optimism.

As this play progresses, some audience members will smile and laugh, while others may fight back tears. Considering some of the somber topics, which include depression and suicide, it is a bit surprising that there are enough “brilliant things” so humorously presented.

The youngster eventually grows up, attends college and gets married, but continues to compile an ever-growing list.

Agnew’s first-person narrative varies a bit from show to show, as “Every Brilliant Thing” calls for the Narrator to hand out cue-cards containing one or two words to be shouted out by an audience member at the appropriate time. Some of the everyday things on her list are serious, while others are just downright silly.

Also, some volunteers in the Cabaret’s audience are gently solicited to “act out” some minor roles, including her father driving the youngster to the hospital, an understanding school teacher, and a veterinarian who has to put down her dog.

Millbrook wisely benefits from the Cabaret’s intimate setting, which allows the affable Agnew to roam freely throughout the audience, very disarming and easily bonding with her witty, impromptu comments.

Although her interactions are often witty, when the topic zeros in on suicide near the end of the fast-moving play, the narrator gets deadly serious by loudly proclaiming “Don’t do it!”

Rated PG, “Every Brilliant Thing” is an imaginative way to wind up an ambitious season in a most delightful way.