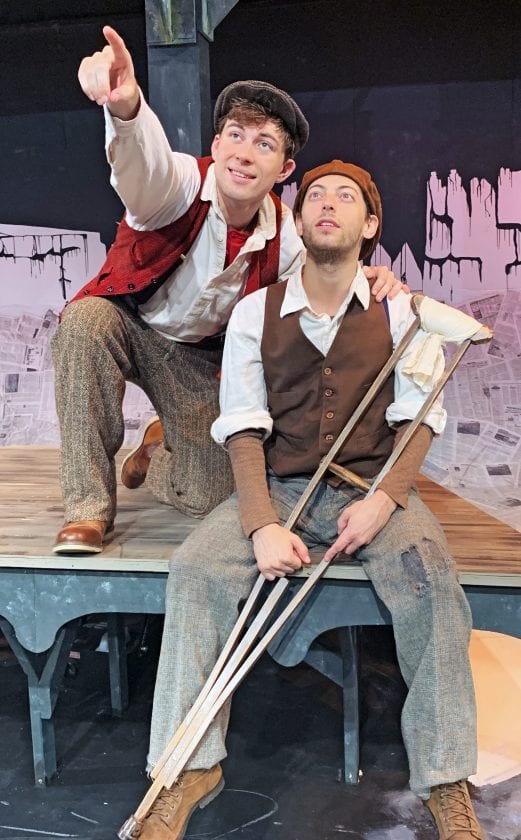 MILL HALL — If Millbrook published its own newspaper, tomorrow’s banner headline might read: “Newsies To Dance and Prance On Old Barn Stage.”

Although the 1996 film upon which the show is based was not a box-office success, “Newsies” found new life with additional music and lyrics by Alan Menken and Jack Feldman, and book revisions by Harvey Fierstein.

When the revised show transferred to Broadway in 2012, “Newsies” was nominated for eight Tony Awards, winning two for choreography and music.

Set in New York City in 1899, “Newsies” focuses upon newspaper delivery boys, who dare to stand up to corporate owners, who decide to cut costs by charging the “Newsies” an extra dime for every paper bought.

Leading first the protest and eventually the strike is delivery boy Jack, who lives among the Newsies, many of whom are orphans or homeless. Jack’s main nemesis is Joseph Pulitzer, who orders the cost cutting measures, and tries to stifle the “Newsies” strike.

Millbrook’s production benefits greatly from Courtney Laine Self who wears two hats: director and choreographer. “Newsies” is Self’s fourth Main Stage production, having previously served as choreographer in “Fun Home,” “The Little Mermaid,” and “Mary Poppins.” To say that “Newsies” is a dance-happy show may be an understatement!

Heading the cast are Christopher Doss as the charismatic leader Jack, and Georgia VanRy as Katherine, the well-to-do and fair-minded cub reporter.

The “Mamma Mia” cast is well represented in “Newsies.” Alison Fisher (bride-to-be Sophie) is in the ensemble, while Monica Howe (Sophie’s mother) plays Medda, a singer who owns a theater, featuring vaudevillian entertainment.

Although the Alan Menken score doesn’t have any overly familiar tunes, the often jaunty songs include “Sante Fe,” “Carrying The Banner,” “Seize the Day,” “King of New York” and my favorite, “Watch What Happens” (Katherine’s solo).

Millbrook audiences will enjoy and no doubt applaud some of the show’s acrobatic choreography. There’s lots of leaping and somersaults as the “Newsies” dare to protest and strike against the corrupt publishers.

Rated PG or suitable for the entire family, “Newsies” isn’t just a musical for the audience to “Read All About.” With a timeless message, “Newsies” is a rousing musical to see and enjoy!