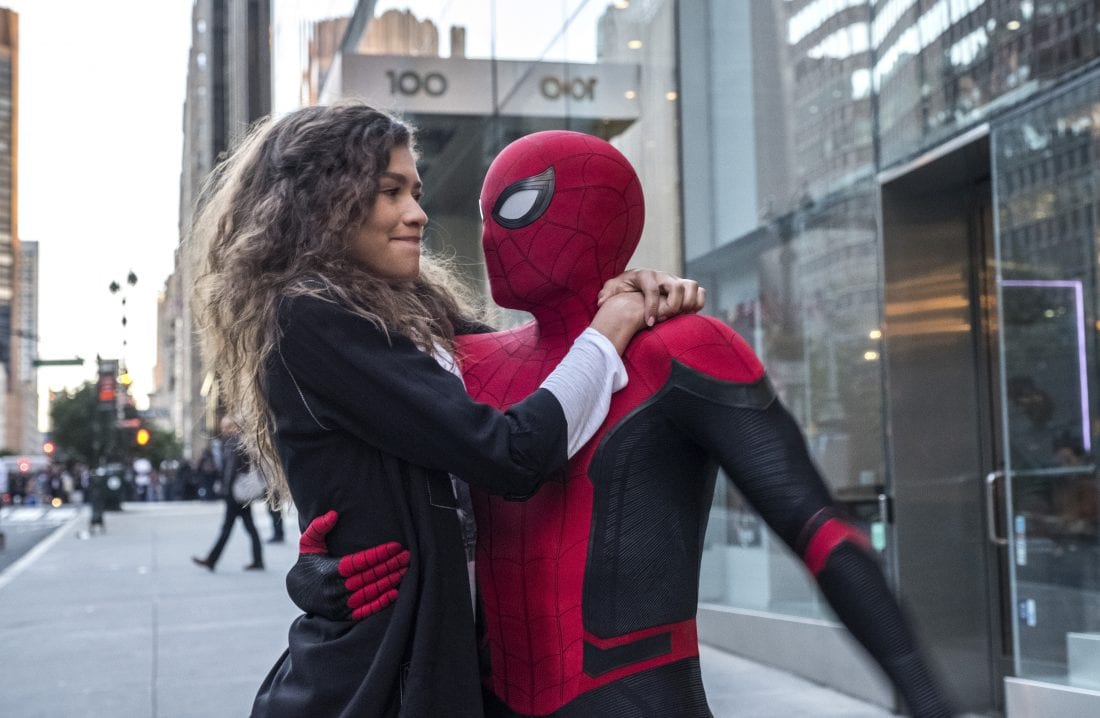 This image released by Sony Pictures shows Zendaya, left, and Tom Holland in a scene from "Spider-Man: Far From Home." (Jay Maidment/Columbia Pictures/Sony via AP)

Like Uncle Ben said, “With great power comes great responsibility.” The balance that Peter Parker strives to uphold between his high school life and being an Avenger is perfectly struck in “Spider-Man: Far From Home,” making it feel like more of a Spider-Man film than ever before.

Taking place after the events of Endgame, Peter Parker (Tom Holland) tries to adjust to the death of his mentor, Iron Man, while also dealing with the pressure to fill his shoes. Trying to escape from the stress, Parker attends an overseas school trip in which he hopes to woo his crush, MJ (Zendaya). However, it appears as if his duties follow him all over the world when Quentin Beck (Jake Gyllenhaal), a superhero known as Mysterio, requires his help.

Although this is a superhero film, the action takes a step back to make room for a teenage rom-com; it’s still there, just not nearly as prominent. That choice not only resulted in more of a well-rounded film, but a more thoroughly entertaining one as well. While the surges of action create more of a white-knuckled experience, the in-between moments are often overlooked. These moments were most of my favorite parts of the film. Another tightrope is walked with such pinpoint finesse as Peter has to learn how to become more than just a teenager that he wants to remain. The struggles feel personal and more importantly believable. His exceptional character arc not only makes him more loveable than he already is, but it is one that will continue to grow in the upcoming films.

On the other hand, the antagonist was almost just as interesting. While it was somewhat expected, the turn the antagonist took was very unique. His powers as well as the action set-pieces were dazzling. Utilizing a heavy amount of visual effects can often be off-putting, but the villain’s use of it is entirely practical. I would say more, but I am trying to avoid spoilers.

Much credit is due to Tom Holland. He seems more like a friendly neighborhood Spider-Man than anyone else. He is the perfect fit for the role; I’m looking forward to what the future holds with him. Not a surprise, Jake Gyllenhaal is the man. Mysterio was already a great character, Gyllenhaal elevates him to another level. Any role he takes, he kills it. Zendaya is allowed to open up more with her additional screen time. Unlike the first film, she now feels like she belongs thanks to her chemistry with Holland.

Being a rom-com, there were A LOT of jokes. The several ongoing gags, especially involving two teacher chaperones, kept the audience laughing. While appreciated, sometimes it was a little too much when a small side story was included just for laughs. It could have helped trim down the running time a bit. Nonetheless, I was happy to be smiling as often as I was.

Despite what its title suggests, “Spider-Man: Far From Home” feels quite close to the heart. This sequel surpasses its predecessor, ensuring that Marvel ends their third phase on a high note. I only wish they didn’t also end it on such an amazing cliffhanger — stupid post credit scenes.