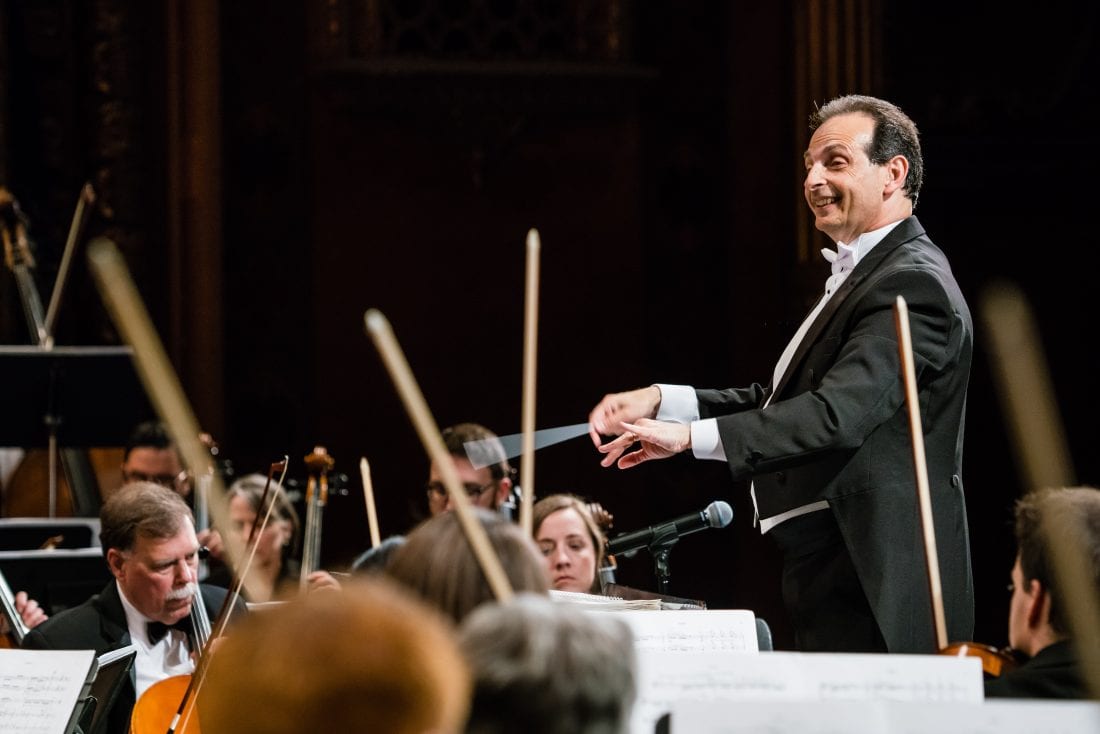 Year after year, the Williamsport Symphony Orchestra impresses area music lovers with rich and powerful performances that are executed with the highest level of skill. The WSO’s programs are an undeniable cultural asset to the community that never cease to leave a lasting fingerprint on the memories of its audience members.

Local symphonic music fans can expect much of the same in the ensemble’s upcoming 2019-20 season, which will see five great shows presented under the theme “Musical Notes & Quotes.”

“The preparation for a new season is always exciting,” said Gerardo Edelstein, WSO music director. “It is like having a new toy, because we have to start from scratch.”

Preparations for the upcoming season started more than a year ago, according to Edelstein. He said that planning the upcoming lineup of shows took a lot of deliberation from those in the WSO’s Artistic Advisory Committee — a group comprised of symphony musicians, board members and community members — which helped provide a season that is both appealing and innovative. Generally, Edelstein will come to the committee with a large list of musical pieces when planning a new season, and then the group will collectively weigh in on what they would like to see played.

“There is such an array and variety of music that we have to narrow it down and pick a few,” Edelstein said. “We want music that will be interesting for our musicians and for our audiences.

“It is a very exciting process,” he added. “Little by little, we start thinking about each concert separated.”

The theme “Musical Notes & Quotes” was inspired by Edelstein’s desire to show listeners a different side of famed composers. With that goal in mind, he looked up dozens of quotes from each of the composers whose works will be featured in the season ahead. At each upcoming show, before playing a composer’s musical number, a quote from that composer will be presented and discussed first.

“Of course, composers are human beings. But, at the same time, they are thinkers,” said Edelstein. “It’s like composers starting to think in a more philosophical way about what music is about and how we should listen to music; or how they were influenced by thinkers and philosophers as they composed their own music.

“I thought it was a great idea to introduce these quotes, so then people could learn more about the composers not only from their music, but also from their thinking and their ideas,” he added.

The first concert slated for the WSO’s upcoming season will feature the works of Wagner, Strauss and Mozart. Desiring to shed a light on the great tradition of Western music produced in Germany, Edelstein wanted this show to have the works of a Classical era composer (Mozart) juxtaposed with pieces from Romantic era composers (Wagner and Srauss).

“What I wanted to bring was a little bit of variety to this show,” Edelstein said.

The program will open with Wagner’s “Tannhauser” overture, which will showcase the WSO’s powerful brass section.

From there, the show will see a selection of songs for soprano composed by Strauss, which will be performed with the help of guest vocal soloist Julia Wolcott, a Penn State and Julliard graduate. When planning this show more than a year ago, Edelstein said he had Wolcott in mind for the solo and worked hard to lock in a date for the show that would accommodate her schedule.

“We are very fortunate to have her for this performance,” Edelstein said.

After playing Strauss, the program will end with Mozart’s Symphony No. 1 “Jupiter,” which is perhaps the composer’s most grandiose and enduring work. Edelstein said he considers “Jupiter” to be the culmination of Mozart’s career, and that it might be the greatest symphony ever written.

“From beginning to end, there is perfection in many ways; from the way it’s crafted to the way the music flows,” Edelstein said. “Compositionally speaking, it uses all of the elements a composer would search for and that the listener will look for.”

Two months after its first program, the WSO will present its second show of the season. This concert will see the works of Vivaldi (“Gloria”) and John Rutter(“Candlelight Carol”) presented with help from the Williamsport Area High School choirs, who are conducted by Kent Weaver. Edelstein said he tries to work with the choirs at least every other season, and that the experience is a treat for all of those involved.

“I always love working with (Weaver) and his choirs because the talent there is unbelievable,” said Edelstein. “They are always extremely well-prepared and high-quality.”

This program will also feature the winner of the WSO’s Young Artist Competition, and will see an array of holiday classics played, such as “What Child is This,” “Hanukkah Melody,” “A Christmas Festival,” “White Christmas,” “Sleigh Ride” and “Polar Express.”

The third show of the WSO’s upcoming season will include some pieces that are based around fantastical themes, and some others that appear otherworldly by virtue of the high level of technical skill required to execute them.

The program will start off with a song by contemporary American composer Michael Torke named “Javelin.” Torke has been on Edelstein’s radar for quite some time, so the conductor searched hard for a composition from him that would fit this concert perfectly. He said “Javelin” was just the tune he was looking for, as it is “very lively, upbeat and appealing.”

After that, the concert will see the WSO perform two works from Prokofiev’s “Cinderella” ballet. Then, performing side-by-side with the Williamsport Symphony Youth Orchestra, the group will play Ravel’s “Mother Goose” suite.

To close the show out, the audience will be treated to Rachmaninov’s Piano Concerto No. 3, which will see the ensemble joined by guest pianist Phillip Edward Fisher. Edelstein mentioned that this piece was the initial inspiration for the “Real and Surreal” theme of the show, as the piano parts are so difficult they are practically “unreal.” In fact, its level of difficulty is so high that the WSO has never before played this composition at a show.

“This piano concerto specifically is considered one of the most difficult in (Rachmaninov’s) repertoire,” Edelstein said. “If you want to be considered a great pianist, you have to go through this concerto.”

Edelstein met Fisher a few years ago through a friend, and ever since that time he has wanted to bring him from his home in England to perform this piece in Williamsport. He couldn’t be more thrilled that the time for that to happen has finally come.

“We are very fortunate to have him coming,” Edelstein said. “I had in mind to program this for a long time.”

Like it has the last several seasons, the WSO will once again be dedicating one of its shows to pop music. For the fourth concert of the year, the ensemble will be playing tunes from beloved films like “The Magnificent Seven,” “Lawrence of Arabia,” “Gone with the Wind,” “Mary Poppins,” “Exodus,” “Batman,” “Anastasia,” “Superman,” “Pocahontas” and “Spiderman.”

This more accessible music, Edelstein said, is played for two reasons: For one, everybody loves it, including all of those in the symphony. Secondly, it helps draw in audience members that might be apprehensive to attend a WSO show otherwise.

“The idea is that hopefully it will bring them back for the last concert of the season, or in the future to a more classically oriented concert,” he said. “It’s not that the 500 people who come to that concert for the first time will all come back to our classical concerts, but maybe 10 percent of them will. Then, the next year another 10 percent will. That way we start building up our audiences.

“The fact that we continue doing it is because it continues being successful,” added Edelstein. “The musicians love it and the audience loves it.”

Anchoring the 2019-20 season will be a performance dubbed “Thrills & Triumph,” which will start off with Dvorak’s feisty “Carnival” overture.

From there, the WSO will have principal flautist Reuben Councill perform the solo on Christopher Rouse’s Flute Concerto. Edelstein said that, when he asked Councill to perform a solo, he had him pick out the one that he wanted to do.

“I listened to it and fell in love with it,” Edelstein said. “It is a very challenging and avant-garde piece of music. You can immediately sense the soloist’s hard work, and the piece is also very colorful.”

The show, and the WSO’s season, will conclude with Tchaikovsky’s Symphony No. 5, which Edelstein has been wanting to have the group play for quite some time.

“Our symphony has not played this piece in a long time, so I thought it was time to bring it back,” he said. “It ends in a very huge and majestic way, so it’s the perfect way to end the season.”