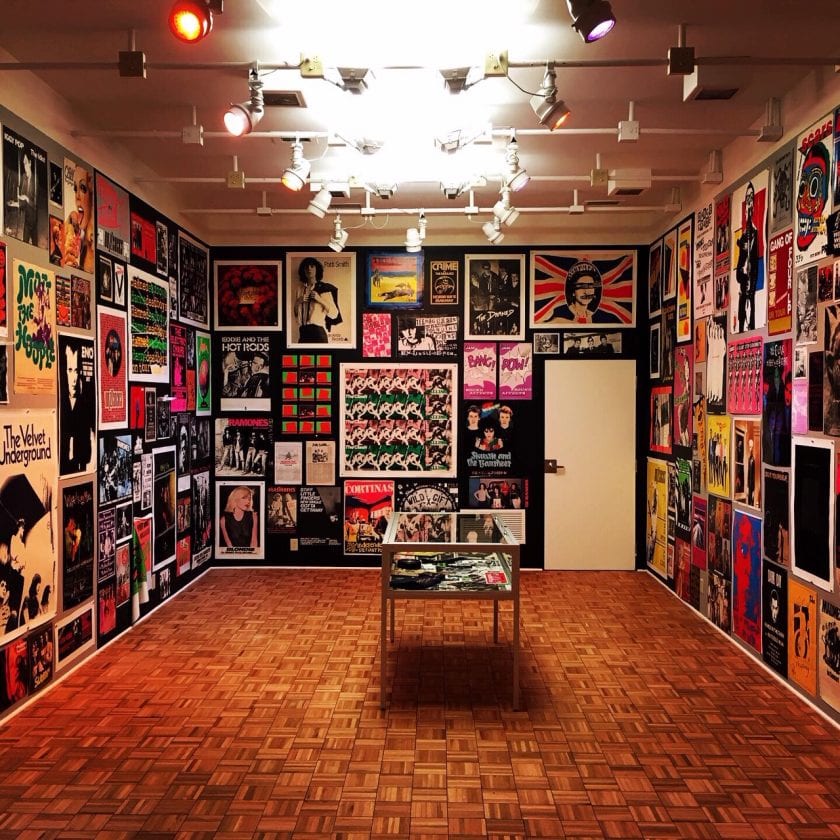 LEWISBURG — When punk first exploded as a counter-cultural movement in the mid-1970s, the music was loud, fast, angry, raw, often amateurish, and seemed virtually indigestible. The attitude was irreverent, uncompromising and confrontational. The fashions were outlandish and shocking — at times even deliberately offensive. The live performances were notoriously unpredictable and sometimes dangerous, blurring traditional lines between audience and artist.

Punk turned everyday life on its head, attempting to retrieve those things rejected by mainstream society — the ‘outsider,’ the most disposable forms of ‘low culture,’ noise, nonsense, ugliness — and revalue them (hence the label ‘punk,’ a derogatory slur embraced as a badge of honor). It encouraged people to make their own culture instead of just consuming what was made for them. And it unleashed a wave of creativity with its DIY ethos: ‘anybody can do it.’

The exhibition includes many now-iconic images and captures a wide range of design strategies: cut and paste graphics, collage, detournement, agitprop, pastiche and comic illustrations. The images can be surreal, funny, disturbing and sometimes surprisingly beautiful. A wide range of graphic artists are represented as well, from the influential (e.g., Jamie Reid, Malcolm Garrett, Peter Saville) to the unknown.

The work included in this exhibition has been generously loaned from the collection of Andrew Krivine and is presented in coordination with the Fall 2019 Bucknell course “Punk Rock Subcultures.”

In the fall of 2017, Bucknell Department of Philosophy Professor Peter Groff, who worked on this show with the Samek Art Museum and Director Richard Rinehart, taught a first-year seminar in the Humanities Residential College on punk for the first time. Afterwards, he was contacted by Jonathan Krivine, whose son was graduating from Bucknell that year.

“He said his brother was a big long-time fan of punk and in fact had acquired one of the largest collections of punk graphic/memorabilia in the world,” Groff said. “He put me in touch with Andrew Krivine and we hit it off. We had very similar tastes and opinions and ways of thinking about the history and cultural significance of punk as musical and broader cultural movement.”

Groff and Krivine started writing emails back and forth and talking over the phone. At that time, a portion of Krivine’s collection was going on display at the Cranbrook Art Museum in Michigan for a show called “Too Fast to Live, Too Young to Die: Punk Graphics: 1976-86.” It was then picked up by the Museum of Arts and Design in Manhattan, where the show ended recently and will now be moving on to Bonn, Germany.

“At some point the idea got floated of him loaning the Samek Art Museum at Bucknell remaining materials from his collection to show as an exhibit the next time I taught the punk class,” Groff said. “In any case, he was game, and Rick Rinehart, the Director of Samek, was very supportive of the idea. So, I made a number of trips up to NYC over the last year and went through Andrew’s collection in great detail to curate the materials we’d use.

They finally settled on over 300 pieces for the Bucknell show — posters for albums, singles and concerts, gig flyers, record and 45 sleeves, zines, t-shirts, stickers, buttons, photos, and promotional gewgaws of all sorts.

The gallery in which the show was to be displayed — the Study Gallery — was a modest size; so, Rinehart, along with Tom Wixo and Theresa Engelbrecht of the Samek Art Museum, decided to mount the materials salon style, to fit in as many as possible.

“It’s a great effect,” Groff said. “Since the exhibit was put together in coordination with my class, I wanted them to be exhibited in a way that would be helpful for what we were doing there; so, we organized them chronologically according to four categories.”

“There are also two glasses cases with a mishmash of zines, 8-track tapes, 45s, cassettes, stickers, buttons, and all sorts of odd stuff,” Groff said. “There’s some overflow stuff in the entrance to Bertrand Library as well.”

Groff said there are tons of amazing pieces in the exhibit, which is a surprise to him, as so many items are currently on display in other shows.

“It’s kind of amazing, given the amount of stuff that Andrew had already loaned out to Cranbrook/Museum of Arts and Design, as well as to the Museum of Sex, for a current show called ‘Punk Lust: Raw Provocation 1971-1985,'” he said. “But he’s got so much great stuff.”

The show features iconic pieces from the Sex Pistols, the Clash, the Jam, Generation X, the Ramones, Patti Smith, Talking Heads, Blondie, Elvis Costello, X, and some remarkable early posters of the Velvet Underground, David Bowie, Lou Reed, Iggy Pop, and many others.

“There are loads of great postpunk stuff, (e.g., Joy Division’s iconic ‘Unknown Pleasures’ poster, printed in silver ink on black), and some really great anarcho-punk agitprop from Crass and bands like that,” Groff said. “We tried to dig deep and go for as much diversity and breadth as we could.”

Groff said the reception for the exhibition so far has been warm and enthusiastic.

“There’s been a lot of interest from within the college but also from all sorts of great people around town who have a genuine love for and in many cases, an extensive knowledge of punk,” he said. “I couldn’t be happier.”

The Samek Art Museum will launch the Fall 2019 semester at 7 p.m. tonight with an opening reception in honor of their latest exhibitions, “The Etching Revival: Its French Sources and American Legacy” and “Damaged Goods: The Punk Aesthetic.” The reception will be held in the Campus Gallery, Elaine Langone Center, Top Floor. Afterwards, guests are encouraged to continue down to the restaurant Brasserie Louis, located at 101 Market Street in Lewisburg, where people can hear local punk bands, Pleasure Kills and Daisy Face at 9 p.m.