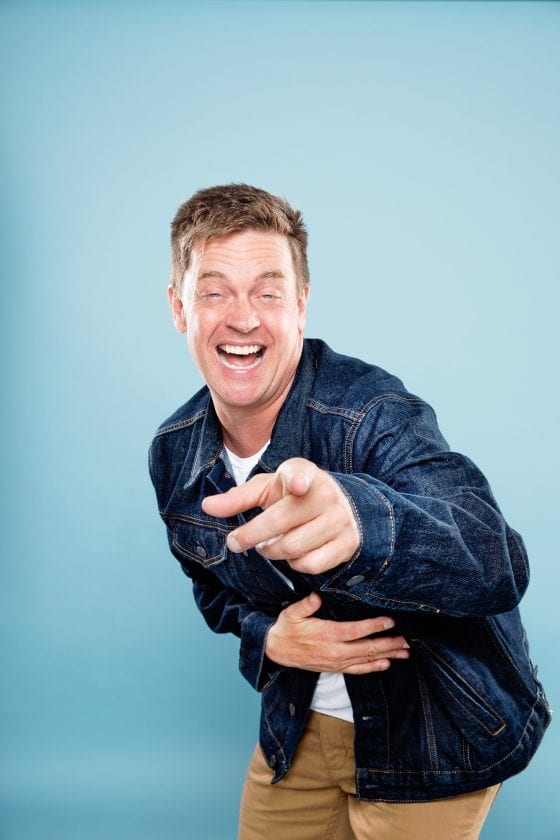 When stand-up comedian Jim Breuer performs, he has two primary goals: Getting people to laugh, and leaving fans with something interesting to think about. If he can check those two boxes by the time he exits the stage, he’s a happy man.

These days, Breuer is happy more often than not.

Now out on his first headlining tour in almost two decades, he has a show that he loves and a reinvigorated passion for comedy. Local fans will soon have an opportunity to see this for themselves, when Breuer performs his “Live and Let Laugh” show at 7:30 p.m. Oct. 4 at the Community Arts Center, 220 West Fourth Street.

“I have been excited about this tour for a while,” Breuer said. “I actually wanted to start it a lot earlier, but I was waiting to see what the Mets were going to do.

“Up until this tour, really I just did one-offs and little runs, but I have never actually done a tour since before my kids were young,” he added. “So, I’m pretty hopped up.”

After spending the last two years doing residencies, where he would play the same venues monthly, Breuer said that his act has been refined because that experience made him “really dig down to be funny.”

“Not to sound corny, (but) I love what I am doing now,” Breuer said. “To be honest with you, it is madness what is going on right now — madness! We need an hour and a half of no politics, no whatever — just getting out to laugh as a family. So, there is a lot behind this.”

Though many fans are most familiar with Breuer’s work as a cast member on “Saturday Night Live” (1995-98) and his role in the cult classic film “Half Baked” (1998), he’s the first to admit that he has evolved a lot through the years, both comedically and personally.

“When I first started, it was more about how big of a star I could be — could I get to wear leather pants and bring out a kangaroo,” he said. “As I got older, I went back to my roots of life with just morals, and how I see reality and life.

“No matter what area we go to, I look for the laugh,” Breuer added. “If I can find it, I am going to deliver it. When you do it for passion, it changes your whole game.”

Anybody who has seen him perform in recent years can tell you that Breuer’s show is one of the cleanest in all of comedy. He really goes out of his way to avoid swearing, and to put on a show that the whole family can enjoy. Where most comedians might have a harder time writing jokes that avoid the use of four-letter words, Breuer said that is not the case for him.

“You have to remember that I have had kids in my life for 20 years,” he said. “I also have great nieces and great nephews, and I can be myself but I have to watch the way I talk around them.

“So, I have had at least 20 or 30 years of practice, and sometimes — I learned this from radio years ago with certain shows that would come on — you can allude to things. They would allude to things they shouldn’t be talking about, but they would paint a picture. Sometimes that is even funnier.”

Though he always goes into shows with written material that he wants to touch on, about half of Breuer’s performance is improvisational. That off-the-cuff style is something he’s been developing a lot more over the last two and a half years, he said.

At this point in his career, Breuer has gotten pretty good at reading a room. He expects crowds to be different from night to night, and knows that a joke that works in one place might not land somewhere else. That knowledge helps him adjust his show accordingly.

“I can feel their energy before I even go out,” Breuer said. “I can tell if it’s a conservative area, an artsy area — I can tell if there is money. You can tell by the buzz before you walk out there.

“Some audiences are a little bit more reserved, so I have to infiltrate them in a different manner,” he added. “Some of them are wild like a rock club.”

It’s no secret that, through the years, many audiences have become more sensitive to certain jokes and words. Things that people might have laughed at when he was first coming up as a comedian are looked on as taboo nowadays. But Breuer said this hasn’t changed his approach to comedy whatsoever.

“Unfortunately, that’s a dangerous and reckless part of our society right now, where we read a headline and we don’t know the context,” he said. “You think we are evolving as people, but we’re really not because that’s no different than, you know, back in the day — ‘PUT A SCARLET LETTER ON HER!’ There is no difference between back then and what is going on right now.

“This is why I never worry about it: It’s always your intention — what is the intention in your heart?,” he added. “If the intention in my heart is really non-offensive and looking for an angle to maybe open your eyes, or a laugh, then that’s all I can do. If someone else has a problem with that, that’s on them — there is something going on in their world that I can never help.”

Breuer said that he considers stand-ups like Bill Burr and Dave Chappelle to be the leaders of the comedy world, and mentioned that he doesn’t think he would have the guts to do what they do. That being said, he doesn’t want his act to come across like a Disney movie either.

“There is a lot of ground underneath that, that is very thought-provoking, powerful, healing and hillarious,” he said.