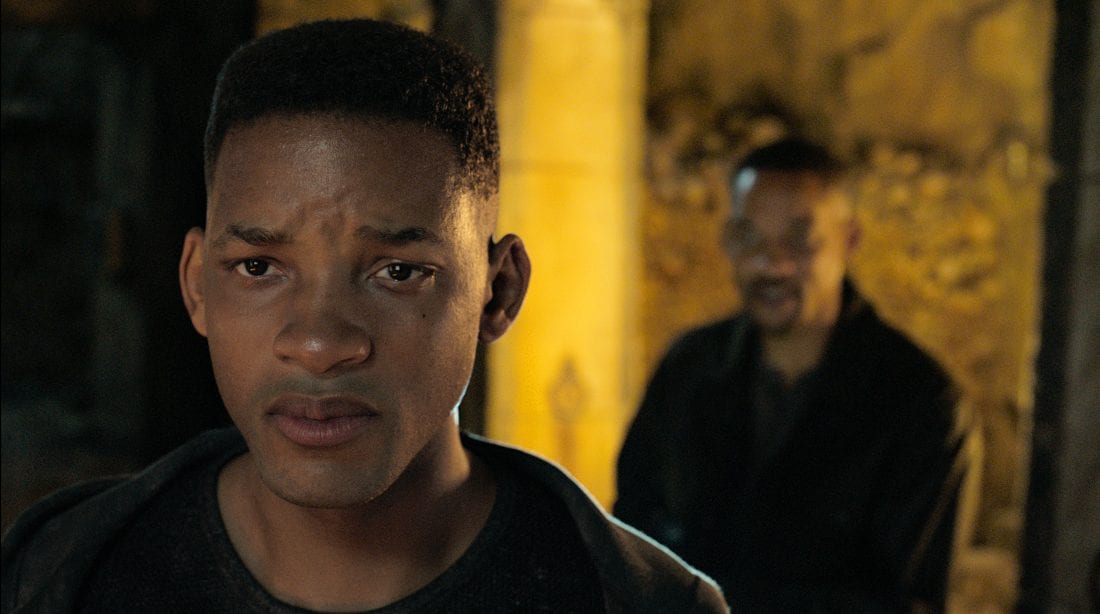 When the credits rolled on “Gemini Man” and I saw the name Ang Lee, something clicked.

Lee is the two-time Oscar-winner who directed “Sense and Sensibility,” “Brokeback Mountain” and “Life of Pi.” His latest, a routine sci-fi actioner starring Will Smith, has a weak script, and I spent much of the film wondering why it held my attention. No doubt Lee — together with an excellent cast — is the answer.

Smith plays Henry Brogan, a near-future government agent who suddenly winds up on the “wanted” list and then discovers that his principal pursuer is a younger version of himself — also played by Smith.

This is done through “de-aging” technology, which seems to be hitting a crest these days (“The Irishman,” “Endgame,” “Ant-Man”); in previews, it felt like a gimmick, as though the whole film were hanging on this. (“Look, it’s Will Smith fighting Will Smith!”)

But surprise, surprise: The older-younger pairing quickly becomes a matter of course — partly because it’s so realistic, and partly because Smith is so strong in both roles. Indeed, for a character created with digital assistance, the younger agent has a remarkably soulful quality, always wearing his heart on his sleeve.

This goes a long way toward engaging us in the story, as do the many fine performances: Ralph Brown as one of Brogan’s superiors; Douglas Hodge as long-time friend; Ilia Volok as a Hungarian informant; and especially Mary Elizabeth Winstead as a woman who joins Brogan in his quest to solve the mystery.

Though she’s not quite buff enough for an ex-Navy character, Winstead proves an effective foil for Smith — her casual and authentic personality nicely balancing his larger-than-life heroics.

Clive Owen does his best with a miserable part, and it’s here that the movie has trouble. This character is far too flat and easy to hate, while that whole plot strand keeps telegraphing its moves ahead of time. Previews give the impression that “Gemini” is a fast, twisty thriller with lots of cool action, but the action scenes — never a strength of Lee’s — are only modestly absorbing; and writer David Benioff just doesn’t do enough with this material (contrast 2012’s similar “Looper,” which never goes where you expect it to).

So while I squirmed a bit and wished the film didn’t come so close to the two-hour mark, I never disconnected from the story. There’s some snappy dialog, especially in the final scene, and a heartfelt (if not very penetrating) approach to the issue of cloning.

Having thus far made about $70 million worldwide, “Gemini” seems unlikely to recoup its over-strained $138 million budget. The de-aging technology was worth what they paid, but the script and the pallid 3-D effects . . .