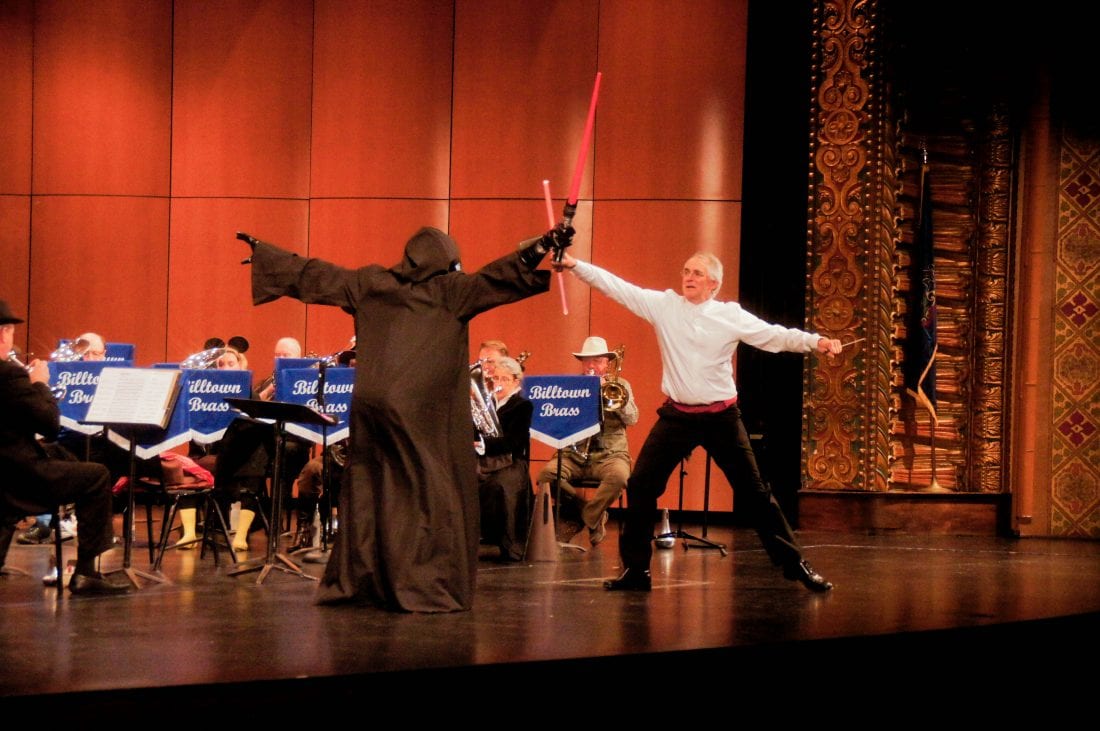 They say necessity is the mother of invention, and the conception of Billtown Brass is a testament to how serendipitously the needs of a community can align with the efforts of dedicated professionals in the arts.

According to Billtown Brass conductor, Rick Coulter, the group was formed out of a logistical issue that the Williamsport Symphony Orchestra had at the Williamsport Country Club: The Symphony had been enlisted to provide entertainment for the Country Club, but the performance area wasn’t large enough to host the entire WSO ensemble, which includes dozens of musicians, many of whom play wooden, stringed instruments. There was also a concern regarding the feasibility of the stringed instruments being out in the summer heat and sun for an extended period of time. Thus, WSO member Coulter was enlisted to come up with a compromise, as he had extensive experience with smaller brass outfits. Coulter was able to convince 22 of his brass- and percussion-playing colleagues to join him, and things took off from there. The group now plays two to five summer pops and holiday season concerts per year.

Billtown Brass concerts are very much an audience-friendly affair, according to Coulter.

“At some point in every concert, we hope the audience is compelled to dance, clap or sing-a-long,” he said.

At the Billtown Brass fall concert, the “Halloween Brass Spooktacular,” the group will perform on-theme original pieces entitled “The Haunted Halls,” “Devil’s Bridge,” and “The Attack of the Killer Trombones,” among others. The “Spooktacular” show will also feature a number of popular tunes arranged for the unique dynamics of the traditional British Brass setup of Billtown Brass, including “Let It Go” from Disney’s Frozen, the Main Theme from Pixar’s “The Incredibles,” the opening music to “2001: a Space Odyssey” (“Sprach Zarathustra”), and “The Monster Mash.”

Coulter has been intimately familiar with the British Brass Band archetype from his high school and university days on. But his motivations for using the British template go beyond his own personal proclivities. Many Billtown Brass members have backgrounds in British Brass and beyond.

“For example, Valerie Whyman, tenor horn, was raised in England in a musical, brass band family. Her father was a band director and her brother is a well-known director and solo cornetist,” Coulter said. “The British brass band instrumentation is standardized around the world with 25 brass players (cornets, flugelhorn, tenor horn, baritone, euphonium, trombone and tubas) and three percussionists. There is a contest circuit in Great Britain and Europe where they take performance very seriously. Much of the music comes from those contests and the Salvation Army brass band tradition. Fortunately, the region is filled with a full collection of highly talented brass and percussion specialists.”

When Williamsport Area School District listed a vacancy for the position of Supervisor of Music in 1989, Coulter, who was at that time a music director in New Jersey, jumped at the opportunity. He cited WASD’s historic excellence on the national stage. In addition, as a musical director in New Jersey, Coulter had been in attendance at many of the same competitions as the Millionaires, and he noted the quality of their program.

In his decades at WASD, Coulter would go on to assist the Millionaires maintain their elite status in the musical community, something in which he takes particular pride.

“My greatest joy is that 25 years after taking over the leadership of the program, the program sustained its national reputation. A few of the indicators of excellence include receiving the National Association of Music Merchants (NAMM) Best Community for Music Education award to the past 18 years, many performances at state and national conferences, White House and Governor performance invitations and an enrollment rate where almost 40% of the high school students elect music daily,” he said.

Coulter also notes that he has had tremendous support over the years at Williamsport Area School District.

“The outstanding K-12 sequential, coordinated curriculum, delivered by an outstanding staff, is at the core of the program’s success,” he said.

Musical education is in many ways the bedrock on which Billtown Brass was built and on which it has been sustained. Over half of Billtown Brass’ members are music educators at the primary school or university levels. Among the members performing at the “Spooktacular” are a number of “aspiring musical educators” from Mansfield University and Susquehanna University. While noting that many members are in the field of education, Coulter contends that role public music education has played in the lives of members not in higher education has proven to be similarly impactful.

“It is also important to recognize those in the band who caught the music bug through their public school programs, probably played in college, and are still active musicians, at a high level today. The band includes financial advisors, engineers, scientists, entrepreneurs, and medical experts,” Coulter said.

Billtown Brass has been going strong for nearly 20 years, and Coulter has a difficult time believing so much time has passed. He is also grateful for the experiences he and his colleagues in the band have shared since 2000.

“The band has had many outstanding concerts in the region including at the Community Arts Center, Central Oak Heights, Muncy Historical Society and Eagles Mere Arts Center. We have partnered with the Williamsport Community Choir, Spencer and the T-Bones and The Vocal Jazz Quartet. Our most prestigious concerts have been the two times we shared a concert with the Salvation Army New York Staff Band. The Staff Band is acknowledged to be one of the finest brass bands in the world and we were honored to share a concert with them,” Coulter said.

The Billtown Brass “Spooktacular” concert begins at 2 p.m. Oct. 27 at the Community Arts Center, 220 West Fourth St. Tickets for the show can be purchased at the CAC box office.