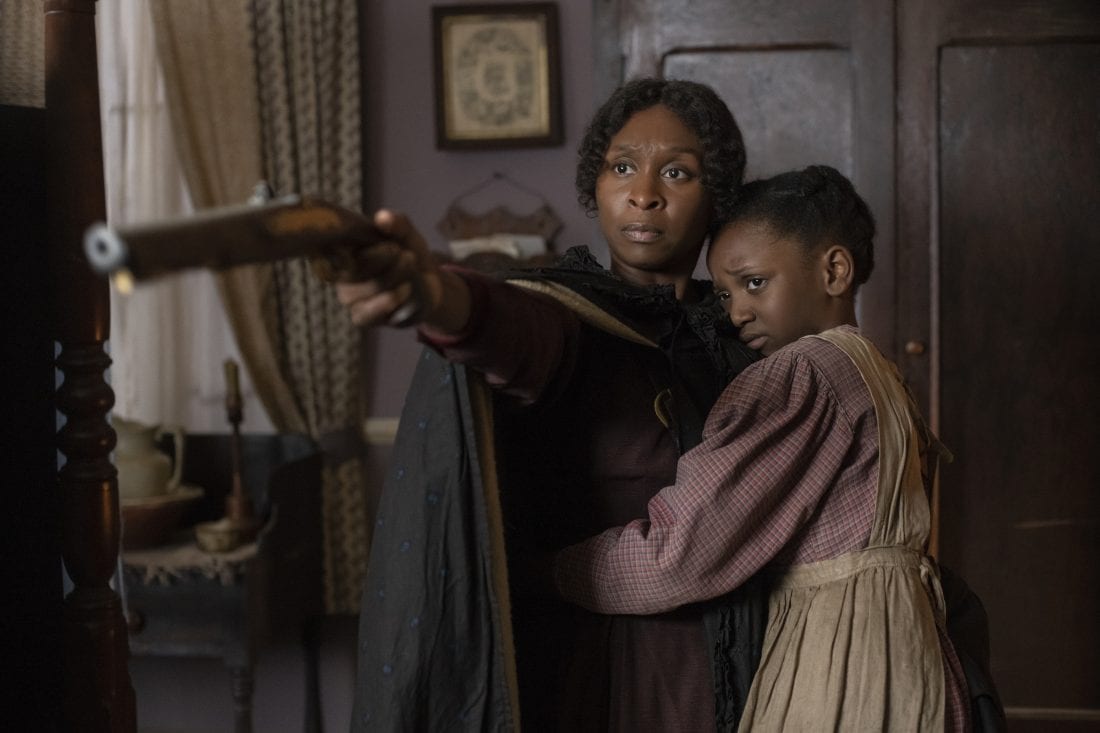 This image released by Focus Features shows Cynthia Erivo as Harriet Tubman, left, and Aria Brooks as Anger in a scene from "Harriet." (Glen Wilson/Focus Features via AP)

That would be Cynthia Erivo, who is utterly compelling in this terrific new biopic about Harriet Tubman — escaped slave, Abolitionist, 19th-century Moses and (later on, in the Civil War) one of the few American women ever to lead an armed military assault.

Since I pretty much loved every minute of this film, I was shocked to see the many miserable reviews at Internet Movie Database; some gave it a mere 1 out of 10 stars — because they altered several facts in the heroine’s life.

And … this somehow came as a shock to film fans?

Come on, guys — Hollywood does this all the time! And in this case, they really didn’t embellish all that much. Though it isn’t exactly a docu-drama, “Harriet” sticks to the basic facts of Tubman’s well-nigh incredible success leading numerous groups out of slavery to freedom in the North — reaching a final tally of roughly 70 rescued refugees. (And this doesn’t include the additional 750 freed under her leadership in the Combahee River Raid during the war.)

Erivo is so resolute, so raw, such an absolute force of nature, that we can’t help feeling, “This must be what Tubman was actually like!” In the actress’s capable hands, it’s practically a matter of course the way she keeps mowing down opposition. If Tubman had ordered a tree to step aside, I wouldn’t have been surprised to see the thing root itself up and head for the hills.

She is joined by an exceptionally solid supporting cast:

Leslie Odom Jr. (of Broadway’s “Hamilton”) as Philadelphia Abolitionist William Still; Joe Alwyn as a vicious, morally blind slave-owner — and Jennifer Nettles as his similarly worthless mother; Vondie Curtis-Hall as a local black pastor; and Henry Hunter Hall as a slave-hunter, who somehow fits in even though he looks like he just stepped out of a music video by Prince or Michael Jackson. (It is, however, a little harder to believe that Southern blacks ever used the F-bomb!)

Production values are strong, with evocative locales (entirely in Virginia), plus meticulous costumes and make-up.

The film also makes good use of Tubman’s penchant for religious visions; several escape scenes are suspenseful and frightening, even if they occasionally sidestep the facts.

Personally, I don’t mind a few historical changes for dramatic effect, as long as they don’t dishonor the actual person, turning the figure into more or less than she actually was.

But “dishonor” is not a word that comes readily to mind with this film.

On the contrary, “Harriet” serves as a bracing reminder about the courage and fortitude of a real-life hero, which is a darn sight more inspiring than one with a cape, a hammer, a shield — or even a kingdom called Wakanda.