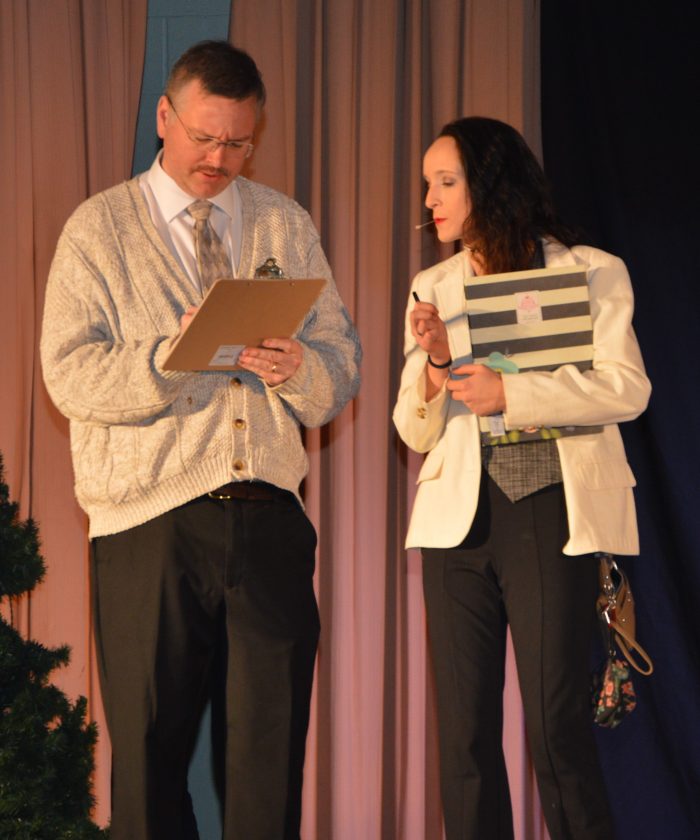 “Christmas isn’t just a day, it’s a frame of mind.”

These words, spoken by Kris Kringle in the holiday classic “Miracle on 34th Street,” serve as a reminder of how powerful the holiday spirit can be. Keeping a cheerful and benevolent disposition not only warms the soul during the cold winter months, but also helps spark the magic and wonder that make Christmastime so special.

For those who need an extra nudge getting into the right “frame of mind” this holiday season, Resounding Cymbals Performing Arts has got you covered. The group will be bringing three free showings of “Miracle on 34th Street” to the Divine Providence Hospital Auditorium this week, with 7 p.m. performances on Friday and Saturday, and a 2 p.m. matinee on Sunday.

After forming in December of 2011, Resounding Cymbals has continued to put on family friendly shows many times per year throughout the area. The Christian-based group of performance enthusiasts currently does six productions annually, but has plans of soon expanding that number to eight, Crossley said.

In 2017, Resounding Cymbals started performing an annual holiday show at Divine Providence Hospital. Its previous two shows at the hospital’s auditorium included the musical “I’ll Be Home for Christmas” and the classic “It’s a Wonderful Life.”

“This is definitely our biggest show of the year,” Crossley said of the group’s Christmas performance. “This show is definitely the most involvement we get from our members.”

After drawing in big crowds with “It’s a Wonderful Life” in 2018, Crossley mentioned that the group wanted another “familiar title” to fill the seats this year, which was a major reason they landed on “Miracle on 34th Street.”

“It should be a good time,” Crossley said. “We have a great cast and crew involved, and everybody is giving it their all. I think it is going to be well received.”

“The actors we have for the leads are very dynamic,” said Crossley, who portrays Judge Harper in the show. “I think we have a good mixture, and some of them have performed with CTL, so we are fortunate to have them with us.

“They have been working constantly,” he added. “Auditions were at the end of August, so we have been going hard for a good three months now.”

Though Resounding Cymbals loves performing at Divine Providence Hospital, putting on the show doesn’t come without some challenges, according to Crossley.

“I think the most challenging thing with the set is that it’s not the biggest space to work with,” Crossley said. “But our stage manager has done a pretty good job of finding the appropriate set pieces for the space allotted.”

Crossley mentioned that many of the set’s materials were picked up from wherever the group could find them the cheapest — thrift stores, attics, garages and closets. Funding for the production was raised through the murder-mystery dinners Resounding Cymbals hosted earlier this year.

Now coming into its third year performing holiday shows at Divine Providence, Crossley said the overall reaction by the hospital has been “very positive.”

“They have enjoyed having us there, so we hope to do more with them in the future,” he said.

Though the show is free, donations are welcome and go to a good cause. All proceeds raised are given to the Hillman Cancer Center and the Gatehouse Hospice at UPMC Susquehanna.

“I think that cancer affects everyone, including myself. My father passed away three years ago due to complications from cancer, and he ended up in the Gatehouse,” Crossley said. “That is just a wonderful place. It is unfortunate that it has to exist, but I’m glad it does.

“The staff and everyone there is great,” he added. “We wanted to give back to them.”

As for Resounding Cymbals’ desire to keep its Christmas shows free of cost, Crossley said it’s “just something we have always believed in.”

“I think everybody should be able to go see a show and have a good time,” he said. “We like to give that to them.”