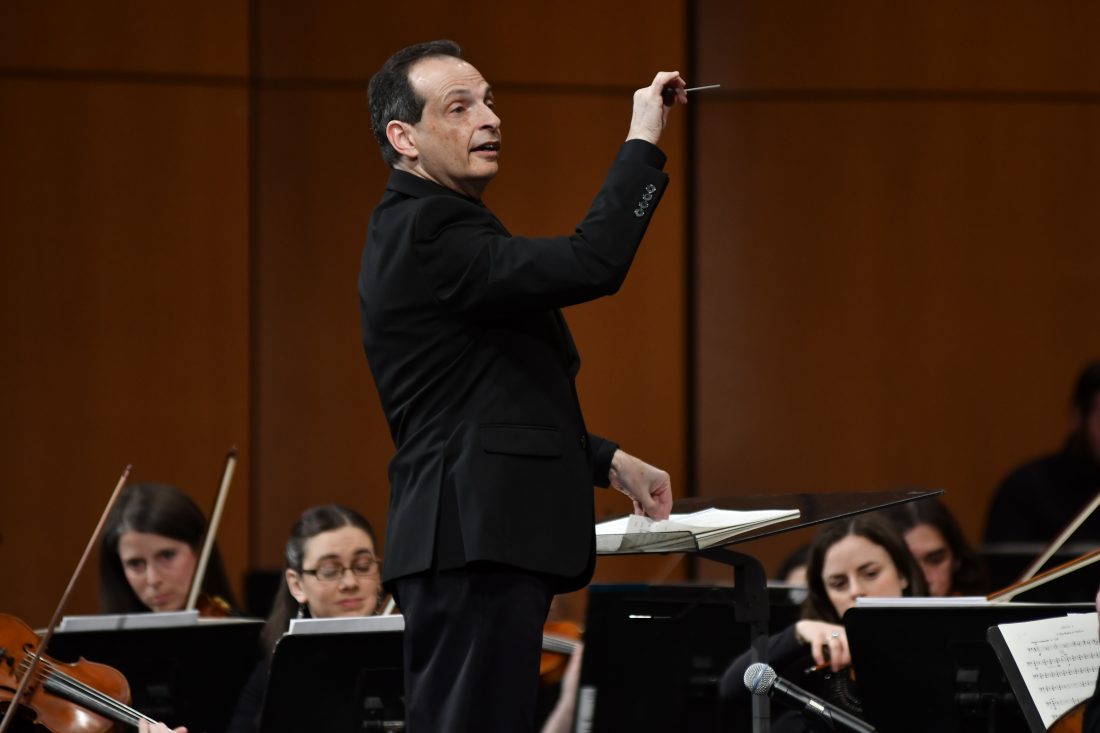 The Williamsport Symphony Orchestra will host its annual Holiday Concert at 7:30 p.m. on Saturday at the Community Arts Center, 220 West Fourth Street. The performance will see the WSO joined by the Williamsport Area High School choirs as well as this year’s Young Artist Competition winner.

“I always say this show is one of my favorites,” said Gerardo Edelstein, WSO music director and conductor. “It is a fun concert in preparation for the holidays.

“One of the best things for the holidays is to celebrate with music,” he added. “That is what we love and that is what we will do.”

The program will begin with a performance of Antonio Vivaldi’s “Gloria,” which will see the WSO joined by the WAHS choirs. The 12-number piece from the Baroque period will also feature three soloists — Emily Wertz (soprano), Sarah Decker (soprano) and Amanda Siliker (alto).

“It is very special for me when I get to perform this piece,” he said. “I have very fond memories of it.”

Following up that song will be John Rutter’s “Candlelight Carol,” which will also feature the WAHS choirs.

The WSO tries to work with the high school’s choirs for the Holiday Concert at least every other season, according to Edelstein. He said he enjoys working with the choirs because of how well-prepared and talented they are, and he gives a lot of credit to WAHS choir director Kent Weaver for always having the students ready for this show.

“It is always a joy to work with Kent. He’s a great teacher and a wonderful conductor,” Edelstein said. “You can tell the quality of the choirs and the way he prepares the choirs.

“It is one thing when you work with your choirs and you conduct the group, but it is another thing when you have to prepare for somebody else that ultimately will conduct the performance,” added Edelstein. “It is always a great experience and a great collaboration.”

“I always look forward to it, and it is fantastic to hear all these young performers,” he said. “Unfortunately, we can only give one of them the opportunity to perform with the symphony.”

Deighton, a 17-year-old cellist from State College, will perform the first movement of Antonin Dvorak’s Cello Concerto in B minor, Op. 104, which Edelstein referred to as “the most beautiful” cello concerto ever.

“It is perfection from beginning to end,” Edelstein said.

As for the young performer who will join the WSO for the tune, Edelstein said he sees a “very promising career in his playing.”

The program will conclude with a slew of holiday tracks, starting off with “Festive Sounds of Hanukah” arranged by Bill Holcombe, which features a medley of Jewish holiday songs. That will be followed up by “White Christmas,” “Sleigh Ride,” “The Polar Express” and “A Christmas Festival.”

“These are the old favorite holiday tunes, and we perform them in a very upbeat and joyful way,” Edelstein said. “We are setting the mood for the holiday season.”

During the WSO’s rendition of Leroy Anderson’s “Sleigh Ride,” Edelstein will leave the stage and give away candy to children in the audience. He will also look for a child to volunteer to go up and conduct the piece, which he said is always a really fun part of the show.

“I know some kids in the audience are looking forward to that,” he said.

Everyone involved with the WSO feels great knowing that the Holiday Concert has become an annual tradition for so many members of the community, according to Edelstein. More than anything, the program is a chance for people to “reflect, celebrate life, and be together,” he said.

“No matter what religion or what specific holiday you celebrate, the idea is for us to all come together and find more of the things that unite us, rather than divide us,” Edelstein added.