‘Da 5 Bloods:’ Race, greed and the legacy of war

Race, greed and the legacy of war 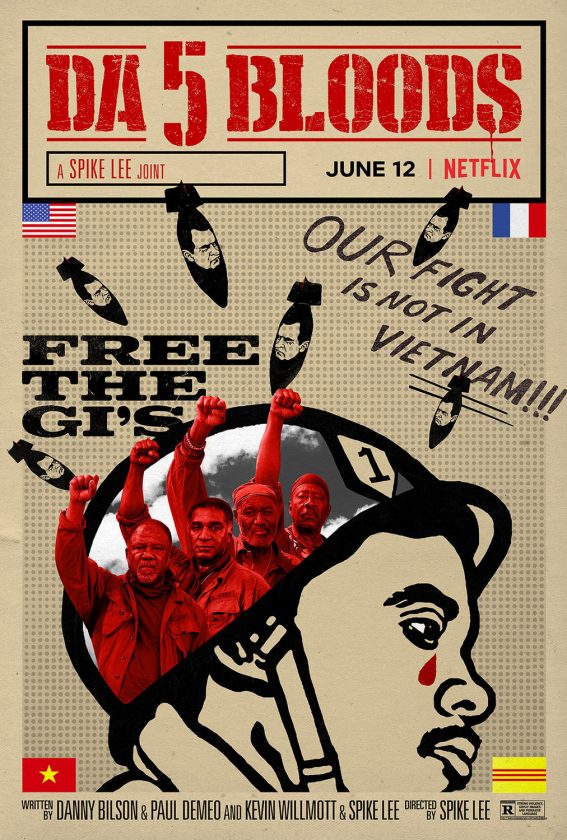 Over the last two decades, it seemed as though Spike Lee was losing his momentum.

After bursting onto the cinematic scene 30 years ago with wake-up calls like “Do the Right Thing” and “Malcolm X,” the award-winning director has struggled for critical and commercial success, notching such non-starters as “Oldboy,” “Red Hook Summer” and “Da Sweet Blood of Jesus.”

Then came the recent, relevant and remarkable “BlacKkKlansman,” which won Lee the 2019 Oscar for screenwriting. And now, with the June 12 release of his galvanizing Vietnam drama “Da 5 Bloods,” Lee is back to telling tales that engage and making movies that matter.

Currently available on Netflix, where it was their top-streamer when it debuted, “Da 5 Bloods” tells the story of four aging Vietnam veterans who return to that country to locate the remains of a fifth fellow-soldier. As it happens, they are also on the hunt for a huge cache of CIA-owned gold that they grabbed and buried on that long-ago mission.

“Da 5 Bloods” is partly about race — mainly addressing the issue of black soldiers who, as one character puts it, “fought in a immoral war that wasn’t ours for rights we didn’t have.” But at the same time, it’s also a gripping morality tale on greed, as the mission slowly degenerates into a squabble over who gets how much gold and what should be done with it.

Actually, “squabble” puts it mildly, as things get mighty ugly in the second half, with ambushes, land mines, fist fights and shootouts that essentially recapitulate the 50-year-old conflict. “It’s strange,” says one man, “how a war never ends for those involved.”

In addition, Lee also weaves in grief, guilt, family dysfunction, PTSD and the ongoing legacy of the war in modern-day Vietnam. These four men, you see, aren’t the only ones who’ve been treated with prejudice and hatred. In fact, one of them is himself something of an anti-Asian racist — who naturally wears a stained red MAGA hat.

Frankly, the film plays this card too blatantly, kind of like “BlacKkKlansman,” whose storyline spoke for itself without the unnecessary and propagandistic anti-Trump coda. But this approach does coincide with “Bloods” over-the-top sensibility. At times it feels like an old-fashioned combat melodrama from the ’40s or ’50s, with grand gestures and a number of highly unlikely coincidences. Critics won’t care for these, but ironically, this larger-than-life feel is part of the film’s success, establishing strong popular appeal that is well served by plenty of closure at the end.

Speaking of which, Lee makes the bold decision to use the actual older actors in these scenes; this takes some getting used to, but is finally no more distracting than some of the crummy de-aging technology I’ve seen.

“Bloods” features strong location filming, Thailand and Vietnam, by veteran lensman Newton Thomas Sigel, plus a suitably big and bold score by Terence Blanchard. Notably, the closing credits list every single musician in Blanchard’s orchestra, along with an army of carpenters, welders, drivers and plasterers. Of course, this shows a desire to give credit to those who often go unrecognized.

And that would include the brave black soldiers who served in Vietnam.