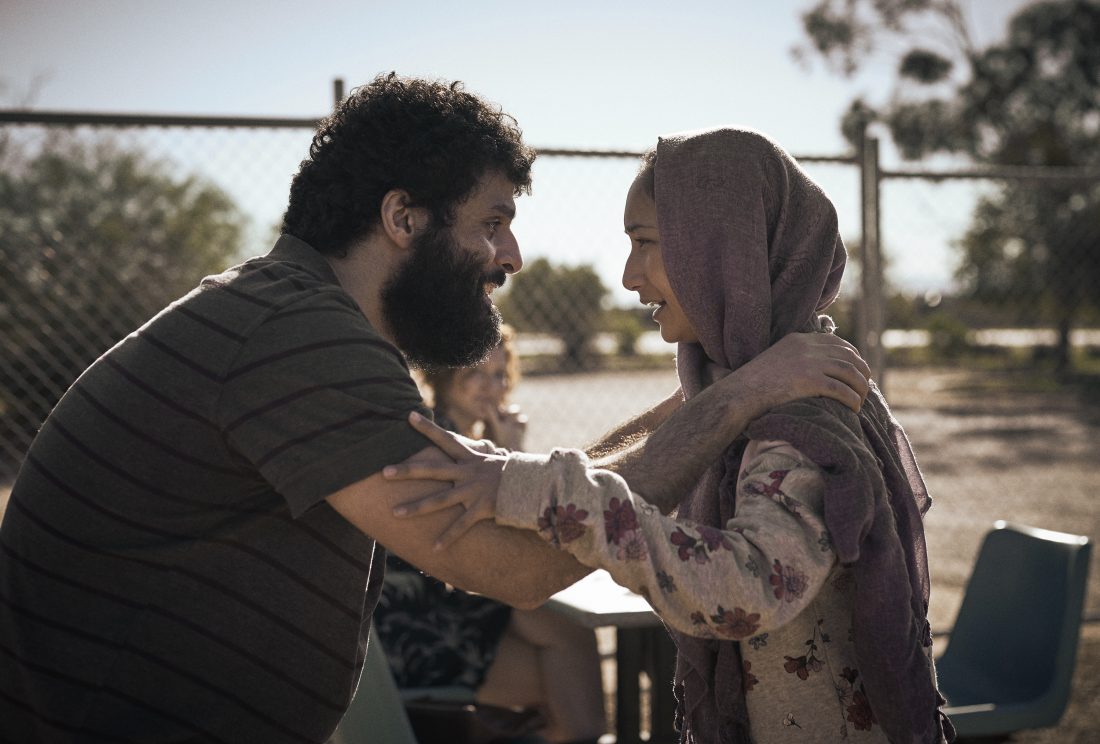 This image released by Netflix shows Fayssal Bazzi, left, and Soraya Heidari in a scene from "Stateless." Co-created and produced by Cate Blanchett, the six-part drama out Wednesday brings together an unlikely group of strangers, including an airline steward running away from a cult, a family of Afghan refugees and a bureaucrat attempting to contain a national scandal. (Ben King/Netflix via AP)

Here’s a collection curated by The Associated Press’ entertainment journalists of what’s arriving on TV, streaming services and music platforms.

“The Old Guard”: The summer movie season may be non-existent this year, but Netflix had a pinch-hitter ready to stream: “The Old Guard.” Available Friday, this comic book adaptation stars Charlize Theron as the leader of a group of ancient immortals who have found another teammate in a soldier played by KiKi Layne (“If Beale Street Could Talk”). It’s directed by Gina Prince-Bythewood, who also helmed “Love & Basketball” and the criminally underseen “Beyond the Lights” (currently available on Kanopy). And it’s a step above your average summer blockbuster.

“Palm Springs”: If a rom-com is more your speed, there’s also “Palm Springs,” on Hulu Friday, starring Andy Samberg and Cristin Milioti as wedding guests who find themselves caught in a time-loop. The sunny pic caused a stir earlier this year when it broke the Sundance Film Festival acquisition record by $0.69.

“Bloody Nose, Empty Pockets”: Blurring the line between documentary and fiction, filmmaker brothers Bill and Turner Ross (“Western”) turn their camera on a group of people in a Las Vegas dive bar the day after Donald Trump’s election. The filmmakers rented the space, recruited the patrons and told them all to pretend that the bar was closing at the end of the night. But the alcohol is real, the conversations unexpected and the result, available to rent Friday, is pure filmmaking magic.

The Dalai Lama: To commemorate his 85th birthday, the Dalai Lama released his first-ever album. The 11-track “Inner World” features teachings and mantras by the Tibetan spiritual leader set to music. On the project the religious leader recites the mantras of seven Buddhas, discussing topics like wisdom, courage, healing, compassion and children. Grammy-nominated sitar player Anoushka Shankar makes a guest appearance on the album, playing on “Ama La,” a track honoring mothers.

Shaggy: In 2000, reggae artist Shaggy dominated pop radio with his ubiquitous No. 1 hits, “It Wasn’t Me” and “Angel.” Twenty years later, he’s celebrating the album that featured those songs, “Hot Shot,” by re-releasing the project and including updated versions of his hits. “Hot Shot 2020” will be available Friday and will also include classic songs from Shaggy’s catalog, including the 1995 smash “Boombastic.” Sting, who collaborated with Shaggy on the Grammy-winning 2018 album “44/876,” is featured on new versions of “Angel” and “Primavera.”

“Stateless”: Viewers seeking to stir their hearts and minds should consider Netflix’s “Stateless,” set in an immigration detention center in the Australian desert. Co-created and produced by Cate Blanchett, the six-part drama brings together an unlikely group of strangers, including an airline steward running away from a cult, a family of Afghan refugees and a bureaucrat attempting to contain a national scandal. The cast includes Yvonne Strahovski (“Handmaid’s Tale”) and Fayssal Bazzi (“Top of the Lake”). The story’s goal, as Blanchett described it, is to illustrate the global displacement crisis and “how we’re being separated from our humanity.”

“Tough as Nails”: Muscles and grit developed at work, not with a personal trainer, are put to the test in CBS’ “Tough as Nails,” a competition series on Wednesdays. A farmer, roofer and iron worker among those testing their mental and physical prowess in job-site challenges. The series, hosted and produced by Phil Keoghan (“The Amazing Race”) will pick a champ and give those who fail to go the distance solo a shot at prizes in ongoing team contests. The action heroes include welder Linnett Key from Lecanto, Florida; Marine Corps vet Kelly “Murph” Murphy of Paragon, Indiana; and firefighter Young An of Alexandria, Virginia.