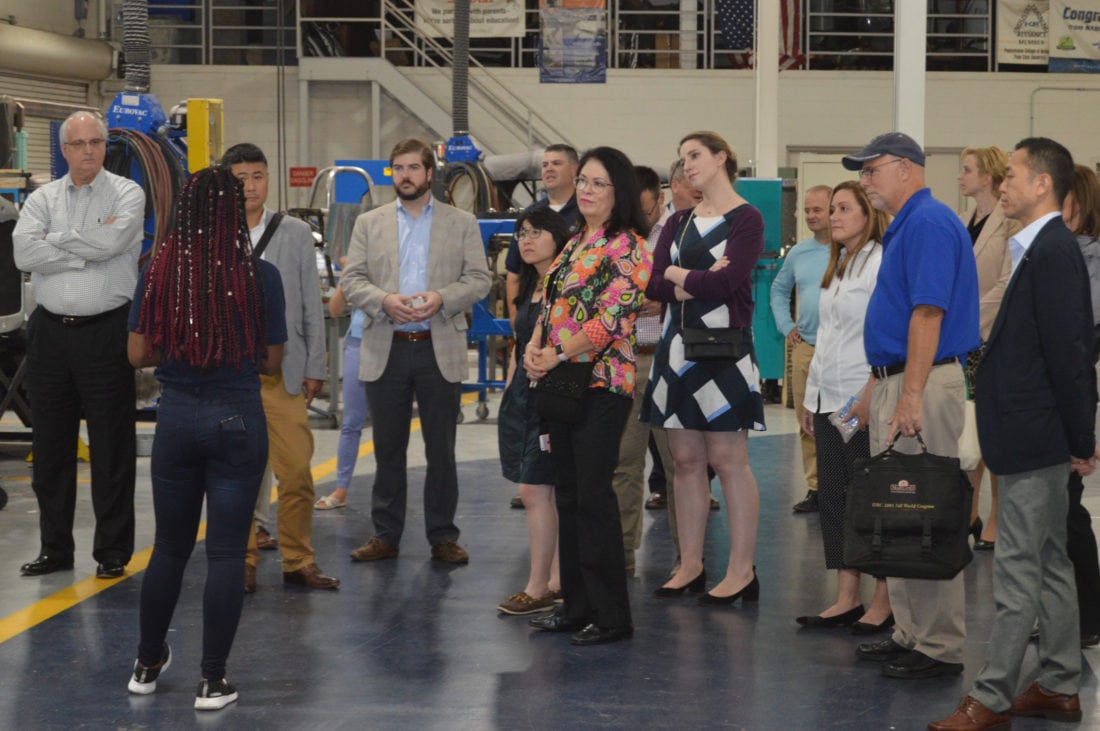 A group of business representatives recently toured the area as part of the second annual site consultant familiarization tour hosted by the Williamsport/Lycoming Chamber of Commerce and the state Department of Community and Economic Development.

Fourteen consultants participated in the tour this year, including four representatives from the international community.

“My mission here is to facilitate Taiwan and United States businesses to have more trade,” said Emily Y. C. Hou, an economic officer with the Investment and Trade Office in the Taipei Economic and Cultural Representative Office in the United States.

“This trip really helped me to understand Pennsylvania … the strengths in Pennsylvania,” she added.

“I represent companies that are wanting to expand their facilities and I negotiate the incentives for them. I specialize in workforce development,” Alison Benton, site selection consultant for Aliquantus. “My companies always want to lead with the workforce piece so if they don’t have qualified workers they’re not willing to go to that location.”

According to Jason C. Fink, executive vice-president of the chamber, the tour is really a time when “seeds are sown” with the participants.

“It’s more of a long-term investment. We don’t expect to see immediate results,” Fink said. However, he added that last years’ tour did yield a direct lead.

A part of the process is a survey that’s conducted by the chamber of all the participants, which Fink said is to make sure everything they needed to learn from this type of tour was covered.

“In addition to that,” he said, “we do periodic outreach to all of them just so we keep them in the forefront of any potential opportunities that could come our way from their given work.”

“One of the things that we’ve already received from a couple of them is some thank yous and some good insight from them about this,” he added.

Fink said the response from the tour seemed to be even better this year.

“They were very inquisitive about our market. They were looking to get as much as they could out of us, to get a better understanding of what we have here in terms of labor force, in terms of healthcare providers, in terms of just a general overall community,” he said.

The trip helps them understand what Lycoming County has to offer.

“I’m pleasantly surprised at what we’ve seen so far … very technical, very advanced manufacturing, all of the variety of the jobs available here and the education level at Penn College,” Benton said.

Hou talked about what the area can offer Taiwan. She said they lack certain natural resources, like natural gas, which is a growing industry in this area.

“Taiwan, since we are a small island, we don’t have so many resources, like natural gas, so we need to buy from the United States. I try to explain to them that the Marcellus Shale is booming. It is the quality and quantity number one in the United States,” she said.

Even though the tour was held in late August, Fink said it has already yielded results.

“We did get a lead out of this already. Quite honestly, you don’t expect to get this right off the bat,” Fink said. “We do have one that we’ve sent some information onto somebody who was looking for a particular type of industry that they had a client and so we sent them property information. They were looking for a particular style of building that we were able to provide for them a former manufacturing operation within the city of Williamsport.”