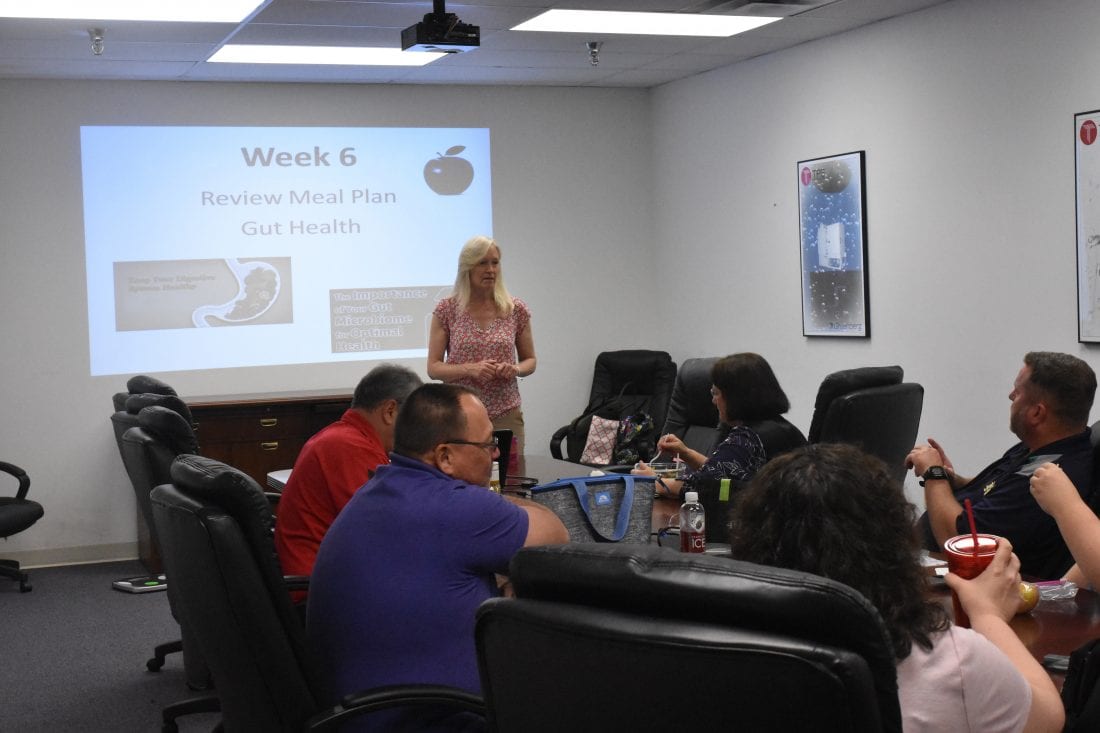 Rose Trevouledes, a registered dietician, has found herself on the front line of defense of rising health care costs since spring of 2017. Today, Trevouledes continues the fight against diseases that are a result of obesity through her Lose Weight with Eight program that she conducts at a wide variety of companies.

According to Trevouledes, the “primary goal is to help employees reach a five percent or better weight loss and exercise daily… to reduce the risk of diabetes by 58 percent.”

Treveouledes added that the numbers her program looks at – blood pressure, triglycerides, and cholesterol levels – are all “real markers for health” and play a major role in improving an employee’s health.

“If an employee weight loss/wellness class can deliver changes, it is improving employee health and reducing their risk of developing chronic disease including: diabetes, hypertension, heart disease, cancer,” said Trevouledes. “And for the company they are cutting down on health care costs and improving productivity.”

Trudy’s Barefoot Yoga in Montoursville began participation with Trevouledes program in fall of 2018. Lynn Getz participated in the class and lost 15.6 pounds during the eight weeks. Today, after maintaining the lifestyle she learned from Trevouledes class, Getz has lost roughly 40 pounds, which is a 25 percent weight loss.

“When she advertised her program, I knew Rose, we have been friends, so I thought this was the perfect combination,” said Getz. “I thought, man if I could lose just 10 pounds that would be great. And by the end of the eight weeks I was way beyond that and I kept going. It has been so easy, it is not like working and so far it has stayed off.”

Lycoming Engines began working with Trevouledes in the summer of 2017, and continued the program in January of 2018 and again in January of 2019 due to their previous successes. Kim Rosato, employee, was one to participate in the eight week program. Though she started out skeptical, in the end she lost 15 pounds, which was an 8.7 percent weight loss.

“I liked the fact that Rose was more like a friend than a teacher,” said Rosato. “She was helping you. She didn’t say you have to do this or you have to do that, but she made suggestions and found things that worked for you specifically. That is what really helped me.”

Thermal Product Solutions began working with Trevouledes in January of 2018, and has seen extreme leaps and bounds towards a healthy lifestyle in many of its employees ever since. Shelby Erb, of TPS, originally lost 36 pounds, according to the article written by Katelyn Hibbard for the Sun-Gazette in July of 2018.

Since then, Erb has continued the long term lifestyle Trevouledes taught and has now lost a total of 103 pounds in the 16 months since her start. According to Trevouledes, “is living proof of what lifestyle is all about, there’s no going back for her.”

Still working towards her goal weight, Erb reflected on how far she has come since her start with Trevouledes program.

Not only has Erb seen major strides towards her goal weightloss of 116 pounds, but she has also found herself in a completely new and healthier lifestyle.

“I was also able to get completely off of my blood pressure medicine. That was a huge goal of mine,” added Erb. “I can walk up stairs without pain in my knees. Stairs were a difficult thing for me at 286 pounds. I have more energy and overall I just feel better physically and mentally.”

With her small 10 pound successes being accomplished one after another, Erb could not stress enough the importance of being both open minded and passionate for the goal.

“I truly believed one of the reasons I have been as successful as I have been is because I went into this with an open mind… If I can lose over 100 pounds eating healthy whole foods, anyone can,” said Erb.

Hoping for similar results in her employees, Carmen Terry, health and wellness coordinator for all eight Lycoming County school districts and Penn College, is working with Trevouledes to pilot the eight week program, Lose Weight with Eight, this summer at Penn College. According to Terry, the credibility behind Trevouledes’ intentions has shown greatly in the results from past programs.

According to Terry, the affordable eight week program has seen “great success,” in the employees at other companies. A success that Terry hopes to see her Penn College’s participants.

To date, Trevouledes has worked with nine companies to complete 18 classes and help 170 employees. To date, Trevouledes had two employees lost 100+ pounds, two cases of fatty livers being reversed, one employee have their blood pressure normalize in the eight weeks along with a 38 pound weight loss, and many have pre-diabetes reversed to show a normalization in all labs.

“They have adopted a lifestyle approach that they are comfortable with, at their own pace, and they are making the changes necessary to get the results of weightloss, reverse diabetes,” said Trevouledes. “You know improve their overall health.”

For brides-to-be in the time of COVID-19, the pandemic has been less about social distancing and hand sanitizing, ...