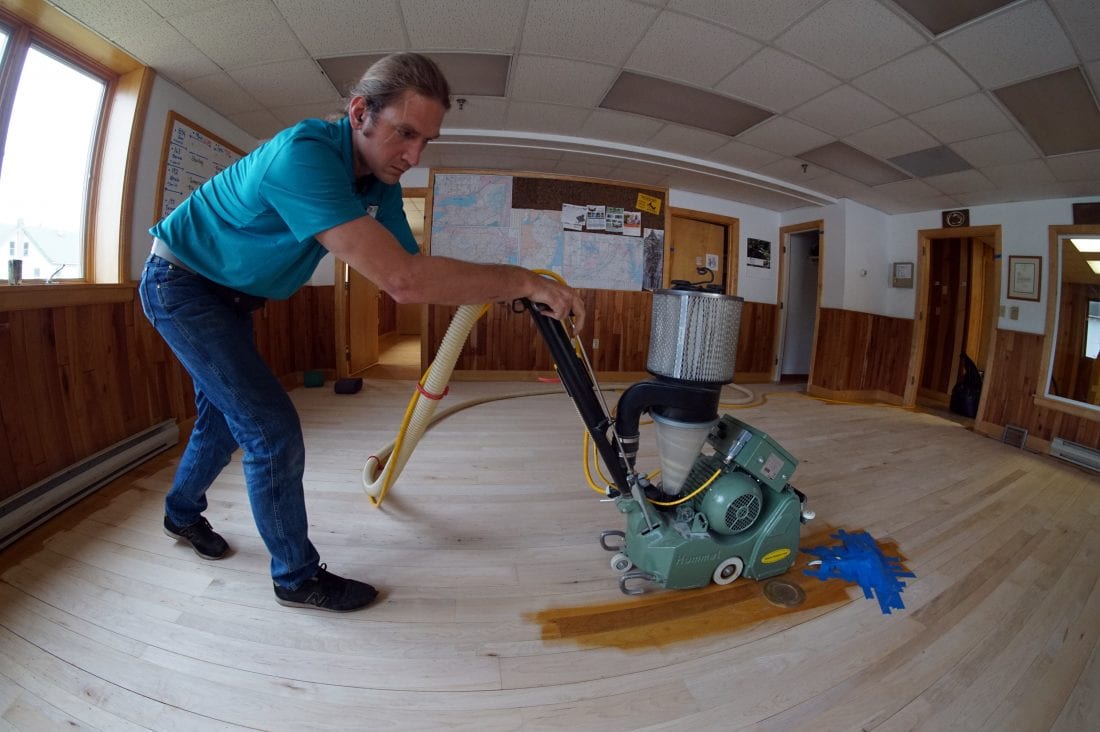 When owners of the new Williamsport Wood Floors were asked to refinish the office floors at Lewis Lumber Products, they were elated.

“That was an honor to do that work for them,” said Nicholas Maxson, who co-owns Williamsport Wood Floors with Dylan Siddle.

The duo had just opened their business in March when they made a visit to historic Lewis Lumber Products in Picture Rocks for supplies.

Upon seeing the worn floors, Siddle cracked wise to Lumber Lewis President Keith Atherholt about how they could use a sanding.

“Keith came back and joked saying, ‘Do you want to sand them?’ He didn’t know what we did and that turned into a sale,” recounted Maxson.

The project was just the challenge the two entrepreneurs wanted to tackle.

“There were six different species of wood (on the floors) so every species acts differently when sanding and finishing. It was a lot of extra work and time consuming but we were up to the task,” said Maxson.

Siddle added, “Being a new business, it was a treat.”

Indeed, the challenges the project presented were well worth it, the two said.

“To be able to work on a floor that unique and for a business that is in the same business as us was great. They could have hired anyone in the United States if they wanted to,” said Maxson.

It took seven days to refinish 1,700 square feet of flooring.

In the end, the two did more than gain the job’s completion.

They gained a mentor in Atherholt.

Said Maxon, “Atherholt is passionate about what he does and he is really helpful. We visited him after [we finished the floors] and spent an hour and a half jamming our brains with information. He knows so much about wood and business.”

Maxson and Siddle, both of Williamsport, were friends for years before deciding to become business partners.

“We quit our jobs in January and then we got our first job in March and haven’t stopped working since,” said Maxson.

The two men will refinish or install floors in residential and commercial spaces.

“We primarily do dustless hardwood flooring sanding and refinishing. It is often cheaper to refinish rather than covering it with a carpet,” noted Maxon.

It has now been six months since the doors opened for Williamsport Wood Floors and they are already growing.

After acquiring more flooring equipment, the business intends to hire two additional employees to keep up with demand.

Siddle said that they are now booked for projects through August; the extra employees will help with their backlog.

For Siddle and Maxson, they believe their endeavor is filling a void in the market.

According to the two, there is a need for floor restoration in the region.

For Siddle, filling that void has been rewarding.

“There are only a couple of people who do it so we learned as much as we could and made the jump. It is exciting. It’s instant gratification when you get there and the floors are terrible but when you leave they look brand new,” he said.

In addition to their polished skills, Williamsport Wood Floors prides themselves on excellent customer service.

Siddle said, “When we show up, we have a smile on our face and if you accidentally scratch the floor when moving the furniture back in, we will fix it for free.”

Though the business is in demand, they are accepting new clients for whom they provide free estimates.