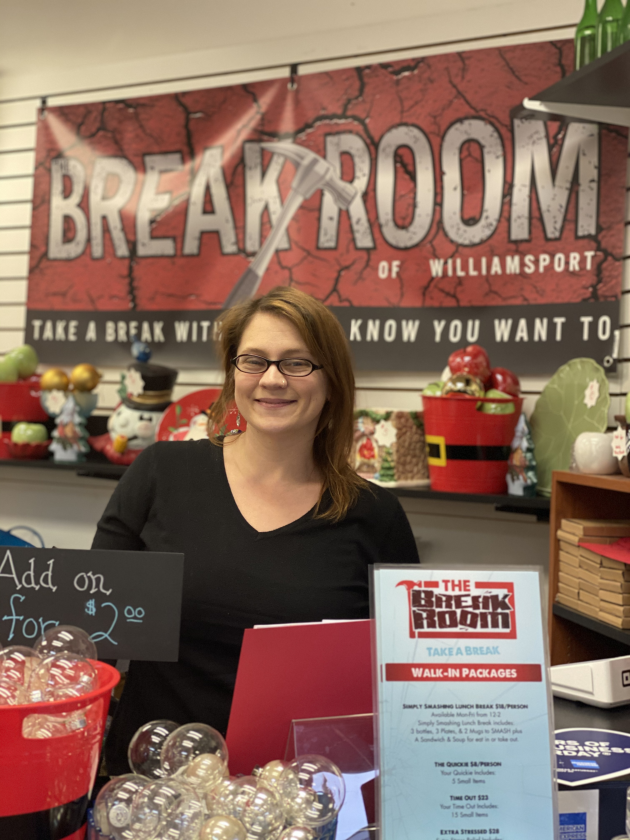 Virginia Weigle wants to give the residents of the Williamsport area a break. The idea for The Break Room, 1009 Washington Blvd, began in an online support group when a friend of Weigle’s shared her experience at a “rage room,” a business concept gaining popularity across the country where customers can don safety gear and break everything from beer bottles to television sets.

Weigle’s husband passed away in 2018 and, after that chat with her friend, Weigle decided to break some bottles at home as a way to work through her own feelings. She thought the idea would appeal to others who were looking to reduce stress, especially if they did not have to clean up afterwards.

The meaning behind the name she chose is two-fold. “I didn’t just want to be a place to break things, I wanted somewhere people could take a break.” said Weigle.

The Break Room has two rooms where up to four people at a time can smash a variety of glassware, bottles, mugs and plates, much of which is donated by local companies.

There is also a glass-free room where little ones can pop bubble wrap and that will soon host pinata and splatter paint parties. Weigle has several corporate events lined up and eventually wants to add other events, such as break up parties.

While Weigle’s initial goal was to give the people of Williamsport something to do, she has been surprised that many of the people coming in to buy gift cards are from out of town. The Break Room recently held its grand opening and it was well attended, according to Weigle. “Everyone that has come has loved it. I’ve had lots of positive feedback,” said Weigle.

Weigle has added other touches that promote relaxation, including a meditation room complete with tranquility fountain and tabletop sandbox. Customers can decompress in there with a cup of coffee after their smash session, relax in one of the chair swings, or even play foosball.

There is also a gift shop with inspirational items, some handmade by local artists. You can even take some of your glass shards home in a bottle as a souvenir.

NEW YORK — A California law that makes it harder for companies to treat workers as independent contractors takes ...