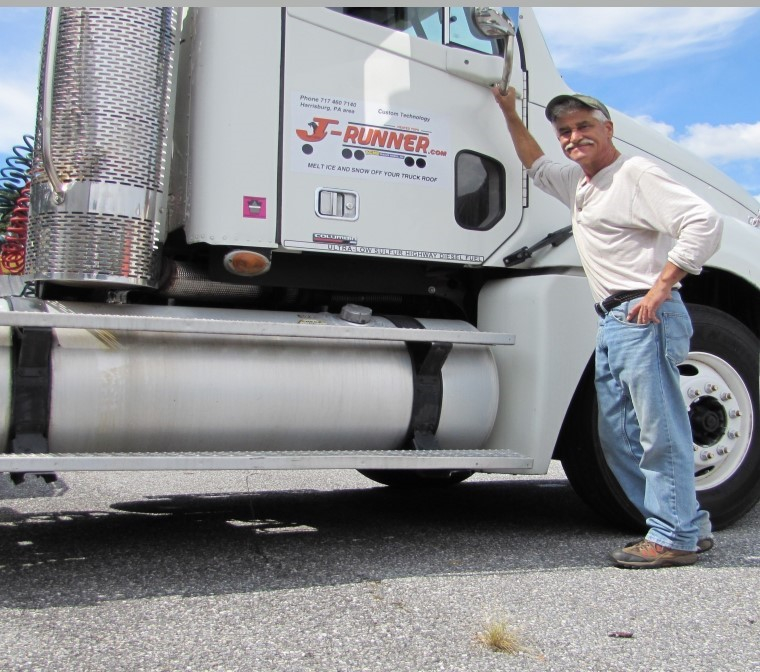 Safety on the roads.

That’s the motivation behind a Williamsport native’s patent-pending invention that works to prevent the buildup of ice and snow on top of large truck trailers, box trucks and other vehicles that can cause accidents.

Jim Nelson, now living just east of Hershey, has spent a considerable amount of time talking to manufacturers and vendors about what he calls J-Runner Heat Wave Roofs.

The inspiration came to him some years ago when he began seeing more incidents of ice and snow falling off trailers and causing harm to other motorists.

In fact, the idea of a low-voltage heating system encapsulated into the roof of a trailer or vehicle became somewhat of an obsession so he acted on it.

The 1978 graduate of Williamsport Area High School spent much of his life in the food business, working on new product development for General Mills and Hershey Foods.

Nelson was directly involved in research and development as an innovation research scientist at Hershey, where he worked for 28 years before retiring.

So he’s no stranger to creating new products.

Many states in the U.S. have laws that require motorists to remove snow and ice from their vehicles before they drive. Most of those laws contain stricter penalties for commercial motor vehicle drivers due to the increased risk and hazard they pose.

These days, Nelson is busy marketing his product and doing technology demonstrations.

Moreover, he stays in contact with state and federal lawmakers and transportation agencies to talk about the technology and its safety features.

Some lawmakers in Harrisburg are pushing to make clearing tractor trailers of snow a requirement, with fines for those who don’t do it.

State law already allows police to ticket car and truck drivers between $200 and $1,000 if the wintry precipitation causes serious injury or death.

The Senate voted unanimously last October for the second year in a row to advance a bill that is intended to be proactive on the issue of ice removal from vehicles. The bill, Senate Bill 114, now moves to the House where the chamber did not take up the bill for consideration one year ago.

The bill, also known as “Christine’s Law,” was created in honor of Christine Lambert, who died on Christmas Day 2005 in an

accident caused by a chunk of ice falling from another vehicle onto her car. If passed, the law would apply to all drivers, including commercial drivers, and mandates that drivers would have 24 hours after the end of a weather event to clear their cars of potentially dangerous accumulation.

Contacted about Nelson’s products, she said, “Since I first introduced Christine’s Law I have heard from many individuals and companies who have lent their creative and entrepreneurial spirit to find ways to clear snow and ice off the top of vehicles, especially tractor trailers and box trucks.

“The roof heating system developed Mr. Nelson is another example of working to find a way to assist truck drivers in ensuring their vehicles will be safe on our highways following a snow storm. The development of scraper systems to other types of snow removal devices to this type of heating system mean that drivers have safe options to ensure that their vehicles are safe to be operated on our highways and not transporting ice missiles that can — in the blink of an eye — cause a tragedy.”

Since the bill’s approval, Sen. Boscola said she has been working with the House Transportation Committee and is “optimistic that Christine’s Law will have the opportunity this session to be considered by the full House and make it to the governor’s desk.”

She added, “For the safety of our residents and visitors to our Commonwealth, Christine’s Law needs to become law. “

In New Hampshire, for example, drivers have been legally required to clear snow and ice off their cars before getting on the road since 2002. Jessica’s Law was passed in New Hampshire after Jessica Smith was killed when ice from a tractor-trailer hit a box truck that ended up hitting her car.

It may just take strict laws to give motor carriers the incentive, or rather, the mandate to install Nelson’s device or something like it.

In regard to commercial trucks on the road, responsible motor carriers have invested in equipment at their terminals whereby trucks are driven under a device that scrapes the tops of snow and ice.

But Nelson said that doesn’t address the frequency of storms hitting and snow and ice building while drivers are on the road.

As for patents, Nelson said his applications have been through periodic reviews at the federal level.

One application relates to the overall product for trucks and vehicles, another seeks a patent on the heating technology, its low-voltage power and ability to work off of a vehicle alternator, as a plug-in option to a general power source or generator.

Nelson currently has two truck prototypes — or demonstration vehicles — on the road.

One is a 26-foot box truck; the other is an 18 wheeler and both have a working heating system.

He connected with Acme Truck & Trailer Car Co. in New Cumberland and Chestnut Hill Auto Electric in Lancaster, where he works as an independent subcontractor on his prototypes.

J-Runner, Nelson said, “only adds a quarter to 5/16th inch height to roofs so clearances are not an issue.”

His system is made up of encapsulated, hair-thin heating element mats permanently built into the top of trailers, trucks and SUV-type vehicles.

It is designed to be powered by an engine’s alternator, through a plug-in electric receptacle or generator. A simple switch can be installed on a dashboard.

His demonstration vehicles have allowed him to determine that J-Runner:

• Melts approximately 3/4 inch to 1 inch of snow or ice per hour under freezing conditions and temperatures.

• Has faster melting rates at above freezing temperatures.

• Allows the operator to turn on the system at any time — including when a storm is coming.

“I have worked over time to reduce my material and installation costs by 25%,” Nelson said.

Costs vary depending on application and vehicle size, but J-Runner, Nelson believes, “adds value to vehicles.”

Nelson is promoting J-Runner to truck trailer manufacturers but notes it also can be retrofitted, as well.

While it appears that truck and trailer manufacturers and motor carriers thus far are hesitant to invest in his technology, Nelson said he will remain persistent by exhibiting his product at truck shows, talking to manufacturers and carriers and to lawmakers.

Nelson said he had a market research study done on his product and it revealed that J-Runner/Heat Wave Roof has “a substantial market value.”

“I’ve received good remarks and feedback on J-Runner being a nice product,” he said, “and that’s what counts.”